Erika Jayne made an interesting confession during the June 2 episode of ‘RHOBH’ — just 5 days before she filed for divorce.

The Lake Tahoe getaway continued during the June 2 episode of The Real Housewives of Beverly Hills, and many interesting things were revealed. But what stuck out the most to us was when Erika Jayne revealed why she loves estranged husband Tom Girardi so much — just five days before she filed for divorce on Nov. 3.

We did the math — and amateur detective work (wink, wink) — and found out that this week’s episode was filmed on Oct. 29, so we thought it was super interesting when Erika gushed about Tom while chatting with the ladies on the balcony of their luxurious rental home. “I’m easy going — believe it or not,” Erika first started telling the ladies, before adding, “I’m really content to let people be who they are because I like to be myself. That’s one of the things I love about Tom the most is he lets me be myself.” 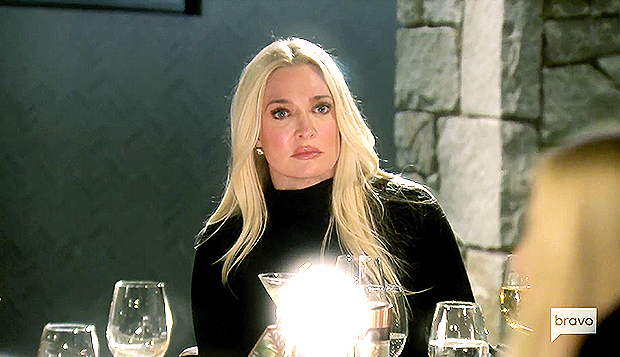 We don’t know about you, but if we were on the brink of wanting to split from our spouse, we don’t think we’d be telling everyone all the ways we loved that person. We probably wouldn’t even feel that way about the person anymore — otherwise, why are we divorcing? Suffice to say, it was a very interesting statement on Erika’s part.

Meanwhile, Sutton Stracke and Crystal Minkoff‘s racial disagreement came to a head. It all started when Sutton said she “doesn’t see color”, and Crystal laughed at that statement. Sutton then started crying, so Kyle Richards advised everyone to go to bed and revisit the topic in the morning. However, when they did, it was Sutton who wanted an apology from Crystal. She, again, said she doesn’t see color and that shouldn’t be a mad thing. In fact, she said Crystal was being mean for insinuating it was a funny thing to say.

Sutton’s teenage behavior actually carried on throughout the remainder of the episode. Especially after the ladies went to dinner and started playing practical jokes on each other. A few of the ladies were texting each other to keep the joke going (a few of them were shooting back fake martinis), and Sutton felt like she was being left out. So on the car ride home, and then back at the house, she started whining and crying. Even after Crystal whispered to her and tried to get her in on the prank. Sutton said it was mean of Crystal to “kick” her (Crystal just nudged her to get her attention in the van and keep things under wraps), and it was the first time anyone had ever done that to her. (Watch the silly exchange above!)

No one could believe the way Sutton was acting. Even when Sutton argued that she’s a “grown woman”, Kyle told her to start “acting like one”. The others looked on in disbelief. Crystal, however, couldn’t take anymore of Sutton’s whining, so she retreated to her room and called a friend to bitch about Sutton. And it seemed like she either forgot about her mic or just didn’t care that it was on because everything she said about Sutton was caught on camera and it was oh so glorious. We just don’t think Sutton’s going to love it.

Other fun moments included Garcelle Beauvais shocking Kathy Hilton and Kyle by admitting how much she used to dislike Paris Hilton, and Kathy keeping Kyle up all night while drinking a red bull, eating snacks and reading newspapers after jumping in bed with her.