Having endured the most harrowing ordeal of his life, financier Ben Goldsmith has received some joyful news at last.

I can reveal that his wife, Jemima is expecting a baby.

Ben confirms the news, telling me: ‘Our child is due in May.’

It comes seven months after his teenage daughter Iris was killed in a tragic accident on their family farm in Somerset.

‘Iris is, of course, irreplaceable, but a new baby will help give Ben a focus again — he has really struggled,’ one of his friends tells me. 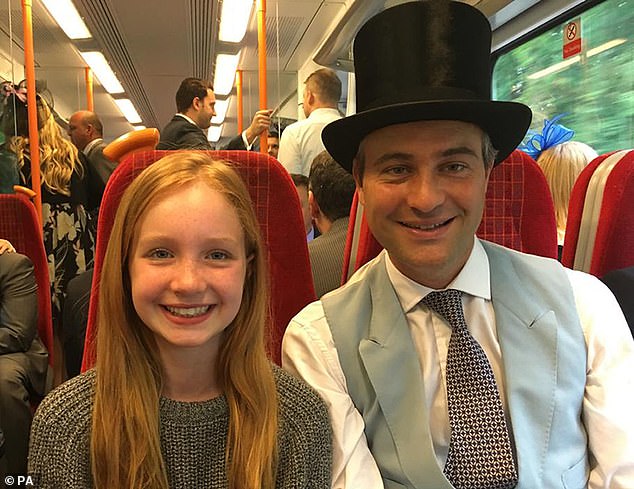 Financier Ben Goldsmith’s wife Jemima is expecting a baby. It comes seven months after his teenage daughter Iris (pictured with her father) was killed in a tragic accident on their family farm in Somerset, writes RICHARD EDEN

The baby will be Ben’s third child with his wife, the model-turned-society caterer Jemima Jones, writes RICHARD EDEN

‘The whole family is delighted with the baby news.’

Iris was just 15 when the vehicle she was driving, similar to a quad bike, overturned at the start of the school holidays last summer. She was with a friend who immediately raised the alarm but she could not be saved.

With shattering candour, Ben told me a few days later: ‘I just can’t get my head round the enormity of what’s happened — it’s just so unfair. I’m feeling desperate, like I can’t breathe most of the time. The only solace these last few miserable days has been having all my family here with us.’

Iris was one of three children from Ben’s first marriage, to banking heiress Kate Rothschild. They have two sons: Frank, 14, and Isaac, 11.

The baby will be Ben’s third child with his wife, the model-turned-society caterer Jemima Jones. The couple have a three-year-old daughter, Eliza, and a son, Arlo, aged two.

Their friend adds: ‘Jemima has been a rock for Ben since the tragedy.’

The couple went to the same destination they had enjoyed their first honeymoon in French Polynesia.

‘We’ve just returned from Bora Bora,’ Lady Bamford tells me at the Positive Luxury Awards held in Bloomsbury, London, where she was handed a Lifetime Achievement prize.

‘It had been the first time we’d been back. It was still paradise.

‘I’ve always dreamt about going back and my children are in their 40s, so we took our grandchildren at half-term to show them the magic, and it was everything we hoped for.’

I Don’t Like Mondays singer Bob Geldof has a new target in his sights: Facebook billionaire Mark Zuckerberg.

I can reveal that the comeback album by Geldof’s reformed Boomtown Rats features a withering attack on the exploitation of young girls by amoral social media giants, naming the Zuck himself.

‘Just another little suckered girl. Gives it up for Zuckerberg… Yea.’

Sara cox made her name as a party-loving ‘ladette’ but now the broadcaster’s become a matchmaker to the aristocracy.

I hear that the daughter of a Scottish clan chief has got engaged to a man she met on Cox’s BBC2 dating show, Love In The Countryside. Hermione Wemyss, 38, who grew up in Wemyss Castle, Fife, is to wed Yorkshire farmer Martin Drake, 44.

Martin tells me he fell for her after noticing a hole in her sock. ‘It just showed a bit of humanity,’ he tells me. ‘I’d never have met Hermione if it wasn’t for Sara Cox.’ 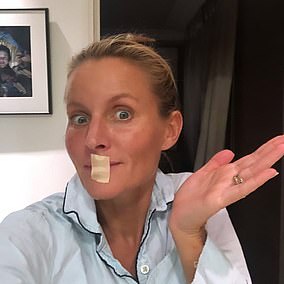 Davinia Taylor has revealed that she sleeps with her lips sealed by surgical tape, writes RICHARD EDEN

Pillow talk could be brief chez Davinia Taylor, the ‘loo-roll heiress’ and former stalwart of the louche Primrose Hill Set.

For she has revealed that she sleeps with her lips sealed by surgical tape. ‘Taping the mouth when sleeping apparently increases the quality of sleep and oxygen absorption in the lungs which help lower blood pressure,’ she claims.

Davinia, 42, insists her builder husband, Matthew Leyden, is enjoying the benefits, joking: ‘Matt is such a lucky guy to have such a sexy wife.’

Brie & Nikki Bella Are Moving: All the Details on Their New Lives in a New City

Coronavirus warning: COVID-19 can live on surfaces FOR DAYS – experts

Joey King Answers the Web’s Most Searched Questions About Her!