Narrative. Character development. Slow-motion action scenes. History. Legacy. Drama. Conflict. Resolution. No, unlike my colleague Helen Pitt I’m not talking about the power of cinema but rather the blockbuster appeal of the greatest sporting event in the world: State of Origin.

If it seems silly that the NRL’s annual showdown between Queensland and NSW is even being compared to the phenomenon of filmmaking that’s because it kind of is. But it’s a debate that’s been foisted upon us by the poorly scheduled clash between round one of Origin and the opening night of the Sydney Film Festival, both taking place tonight.

For those of us who love both sport and art, and particularly the Sydney Film Festival, it’s a dilemma. The festival’s opening night film is by all accounts a worthy examination of Australia’s colonial legacy and a celebration of First Nations history. It’s also a great opportunity to celebrate the power of cinema, and a return to tent pole fixtures on our arts and culture calendar.

But how can a film – any film – compare to the magic of Origin? The idea that being forced to choose between game one and the Film Festival is a choice between sports and the arts assumes that rugby league is not itself art.

Are Phil Gould’s final words before kick-off every year not art? When he quoted the scene from Game of Thrones where Ned Stark explains to his son Bran what true bravery really is, and compared that to playing rugby league, was that not art?

When Macklemore performed his same-sex marriage anthem Same Love at the NRL grand final was that not art?

When musician Roy Bing remixed commentary from the legendary voice of NRL, Ray Warren, into a catchy dance track that implored us to “look at Tallis” was that not art?

Is Nathan Cleary’s chin not art?!

The idea that sport and art are distinct categories with no overlap in purpose, form or audience lacks nuance. But perhaps this framing of them as competitors for eyeballs and resources isn’t surprising, given how much government policy, particularly during the pandemic, was geared towards keeping the ball in play versus the financial wellbeing of the arts community.

Blaming the sports community for having successfully argued that Australians love footy doesn’t seem like a winning strategy for the arts, however. The frustration is understandable, but when surveys show that 98 per cent of Australians engage in the arts whose fault is it really when that popular support doesn’t translate to better policy and more money? Is it time arts administrators and advocates thought more strategically about mobilising the public? 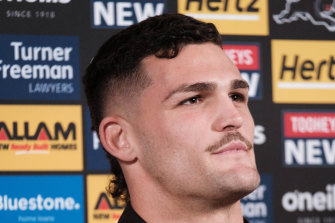 Why does the Sydney Film Festival open on a Wednesday night (let alone Origin night)? Why are so many writers’ festival events held during daylight hours on a weekday, prohibiting working-age people from attending?

Of course the arts needs a serious injection of financial resources. It deserves to be taken much more seriously by government (the early signs are that it will be by the new federal Labor government). But until then, the arts community can take matters into their own hands.

It’s time for the Film Festival’s director, Nashen Moodley, to get on the blower to rugby league chairman Peter V’landys to sort this out. Punters and film lovers are sick of having to choose between State of Origin and the Film Festival. There’s only solution: a mutually beneficial agreement to screen the opening night film of the festival at Homebush as pre-game entertainment.

Let the fans get their fill of both brilliant Australian cinema and brilliant rugby league. It’s a win-win.

Read Helen Pitt’s side of the argument here.

A cultural guide to going out and loving your city. Sign up to our Culture Fix newsletter here.

Elisabeth Moss Repurposes Handmaid's Tale Mask for COVID-19, Jokes She Wore Them 'Before It Was Cool'

Trump demands Covid checks of $2,000 instead of $600 as he threatens to VETO Congress' 'wasteful' $900bn stimulus bill

The truth about Rupert Grint and Georgia Groome’s relationship

England vs Scotland betting special: Get Three Lions at 6/1 or Scotland at 80/1