For Grammy Award-winning British pop singer Sam Smith, the decision to reveal to the world they were non-binary was an essential but terrifying decision to make.

"Talking openly about my [gender] was incredibly scary," Smith, who uses the pronouns they and them, said. 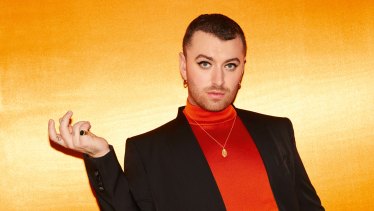 Despite having toured Australia on the back of their previous two albums and making numerous trips Down Under to holiday and visit friends, Saturday night's Mardi Gras performance, headlining the official party after the parade, will be the first time Smith has performed here as their true self.

"When I was 15 I was wearing full make-up and I was wearing all female clothing, I have always been very queer and very loud about it. But when I moved to London I started feeling more and more uncomfortable about being myself, and it was just as I was feeling that that I became well-known," they said.

"So I feel like I have always been this way and now I am revealing more of myself. Every time I make a record I am a bit more myself. With my second album I felt like I was playing the character of Sam Smith a bit."

The path to open queerness has not been an easy one for Smith. While accepting the Oscar for best original song for Writing's on The Wall in 2016 they wrongly claimed to be the first openly gay person to win an Academy Award. Now, Smith said, they are still treading carefully while being the poster child for something they never asked for.

"[I'm] trying not to say the wrong thing. I am a human being, I'm not trained to be a role model. I am just trying to live my life and not hurt anyone," they said.

The headline performance, where Smith appears on the bill with Kesha and Dua Lipa, will be the first live performance in this country of music from their new album To Die For, which is released later this year.

The Sydney Gay and Lesbian Mardi Gras Parade takes place on Oxford and Flinders Streets from 7.30pm on Saturday night. The after-party is held at Hordern Pavilion and surrounding venues from 10pm.

When your local supermarket will open and close on Good Friday

'Friends' reunion didn't have Paul Rudd, Cole Sprouse for this reason: 'You’ve got to pay attention'

'Seinfeld': Jason Alexander Explains Why the Series Ended After 9 Seasons — 'There Was Nothing New We Could Do'