Savvy homeowner reveals how she turned rundown garage into cosy pub for £1, 000 – using stick-on lights from Amazon and spare bricks from the garden

A savvy homeowner has revealed how she turned her rundown garage into a cosy home pub in just two months – and she completed the project on a £1, 000 budget.

Emily Barratt, 36, from Manchester, gave up her pottery painting shop in order to renovate an old school and church building into a forever home for herself, her husband and two children aged seven and six.

And converting the property’s garage into a pub was one of the first projects the self-confessed serial DIYer, who is charting her renovation journey on Instagram (@our_big_renovation), turned her hand to.

‘We had no use for the garage,’ she said, speaking to money-saving community. ‘It had no ceiling and a barn style door that didn’t lock. Plus, it was full of spiders.

‘At our previous home, we had a garden shed bar and loved having parties there. We definitely wanted another bar area to host in and, as the garage was directly accessible through the hallway to the main house, it seemed like the perfect place for it.’ 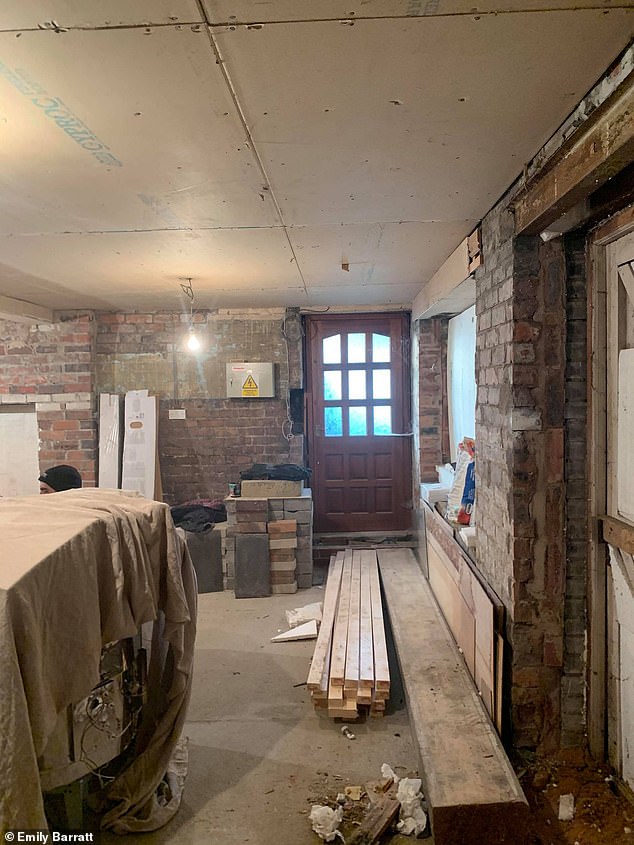 Emily Barratt, 36, from Manchester, has revealed how she turned her rundown garage into a cosy home pub in just two months. Pictured, during the transformation 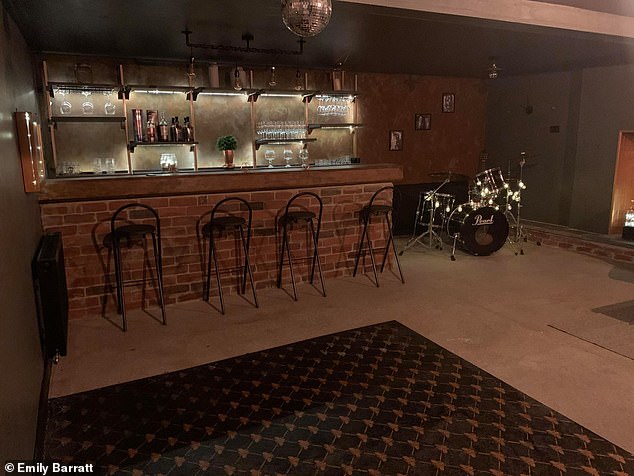 The savvy homeowner completed her first DIY project on an impressive budget of £1, 000. Pictured, after the transformation 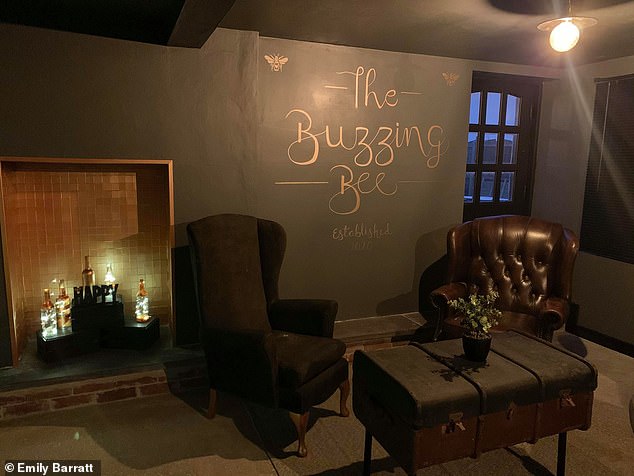 Emily set aside a £1,000 budget for renovating the garage and managed to come in bang on target.

‘I sold lots of items I already had in there to fund it, such as my pottery kiln, as well as a huge amount of reclaimed parquet flooring that came with the house from when it was a school and church,’ she explained. ‘We had already replaced the windows throughout the house so that was one thing we didn’t have to factor in.’

As with many DIY projects, however, the time estimated timescale for the renovation was quickly surpassed.

‘I thought the project would take a week, but in the end it took around two months,’ she explained. ‘The room needed plastering and we decided to add two radiators so we could use it all year round.

She called upon tradespeople to tackle both of these jobs taking a £600 chunk out of her budget. Next on the list was sorting out the floors.

‘I hired a concrete floor grinder to smooth the floor – the dust it created was horrific – and then sealed it with concrete floor sealer,’ she said. ‘I then painted on the dance floor using garage floor paint and a stencil to spray-paint on the bee design.’ 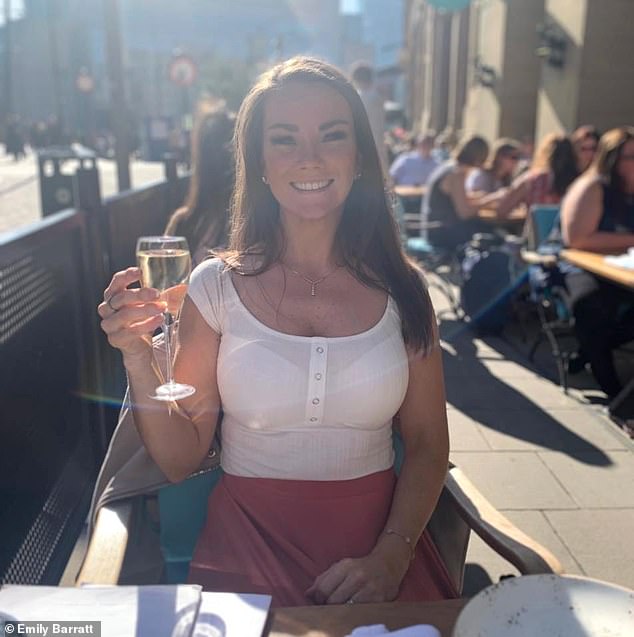 Emily (pictured) set aside a £1,000 budget for renovating the garage and managed to come in bang on target 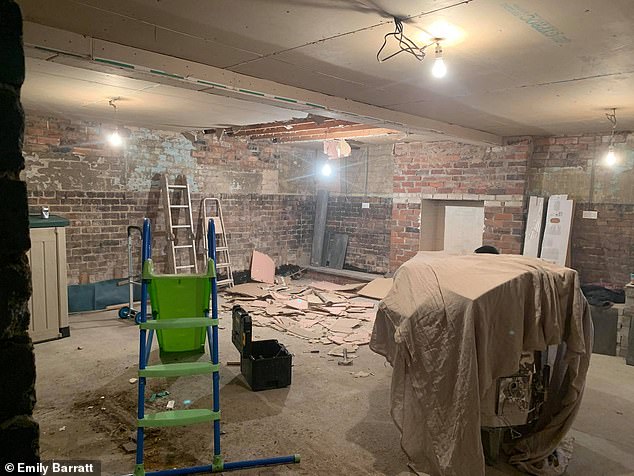 To start off with, the room needed plastering and the couple decided to add two radiators so we could use it all year round. Pictured, at the start of the transformation 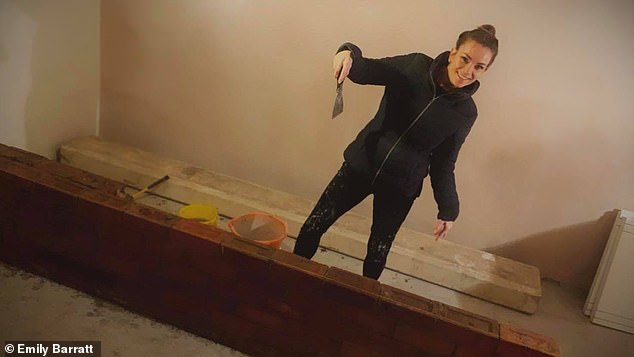 Emily (pictured) thought the project would take a week, but in the end it took around two months

The walls were given a lick of paint with a dark grey shade of B&Q GoodHome emulsion. For the feature wall behind the bar area, Emily used a two-step artisan paint from Craig & Rose to give it a rust effect.

‘To achieve the look I wanted, I painted the wall in crisscrosses using a brush and then went over it using an activator solution to create the rust effect,’ she explained.

She continued the theme by using a permanent copper metallic marker pen to write song lyrics on the walls.

‘Everything is handwritten,’ she said. ‘My handwriting is usually atrocious, but it doesn’t come out too badly on pottery and walls, or so it seems.

‘The idea reflects my love for music. Before I opened the pottery shop, I was an accountant at the Manchester Arena. I also love the Manchester bee, which is why I’ve incorporated it into the design of the dance floor and elsewhere.’

Next, Emily set about building the sleeper-topped exposed brick bar.

‘I built the bar using bricks from our garden,’ she explained. ‘We had hundreds of them going spare from our renovation work so I had already earmarked them for this very purpose.’ 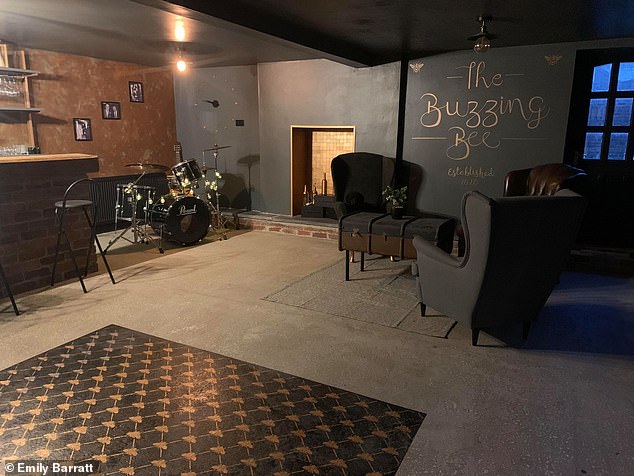 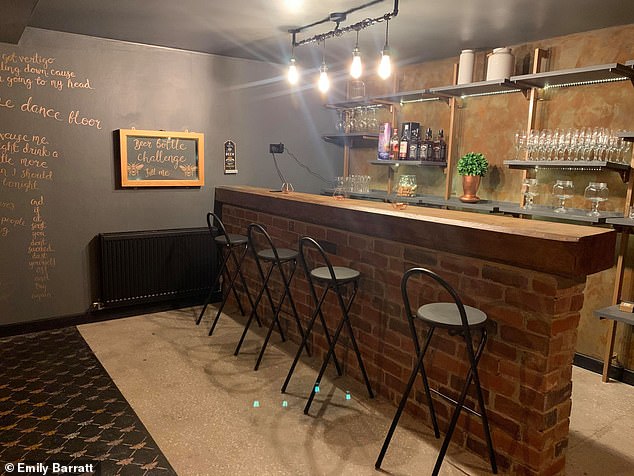 For the feature wall behind the bar area, Emily used a two-step artisan paint from Craig & Rose to give it a rust effect. Pictured, after the transformation 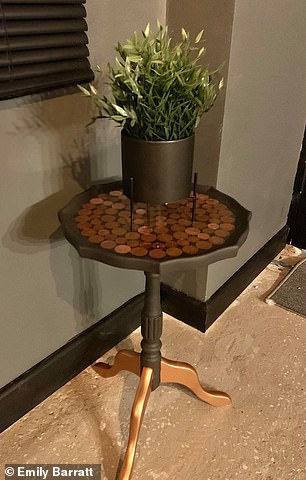 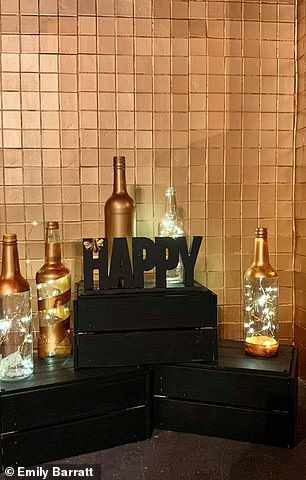 Emily created the penny table by painting it black with copper legs, sticking pennies onto the tabletop with extra strong glue, and adding a craft resin glaze (pictured left). She’s delighted with her new bar (right)

Mixing the mortar to build it with was hard work, but Emily took a handy shortcut.

‘I used ready-mixed mortar from B&Q, using a big bucket and a drill to mix it with, which made my life a lot easier,’ she said. ‘We found the sleeper in the garage when we moved in, and I thought it would be perfect to use as the top of the bar, so I built the brick wall to size to support it.

‘I sanded and varnished the sleeper before fitting it on top. My husband helped me to lift it up as it was so heavy, and we fixed it on with No More Nails.

She continued: ‘The shelves are from my old pottery painting shop, which I’d kept knowing I’d find a use for them. I cut them to make them slimmer and then painted them grey, with copper metal brackets to match.’

They were illuminated with stick-on lights from Amazon, which cost £20.

‘For the fireplace, I painted the existing tiles with FrenSheen natural mineral finish in Cool Copper,’ said Emily. ‘I then used the leftovers to paint some empty wine bottles to put in there, and dressed them up with fairy lights.

‘The photos on the wall are of my late granddad back in the 50s,’ she added. ‘They are super cool images of him taken in clubs during that era. I thought they were fitting, as this would have been his favourite part of the house.’

Emily found the trunk in the loft and converted it into a characterful table by attaching some table legs. 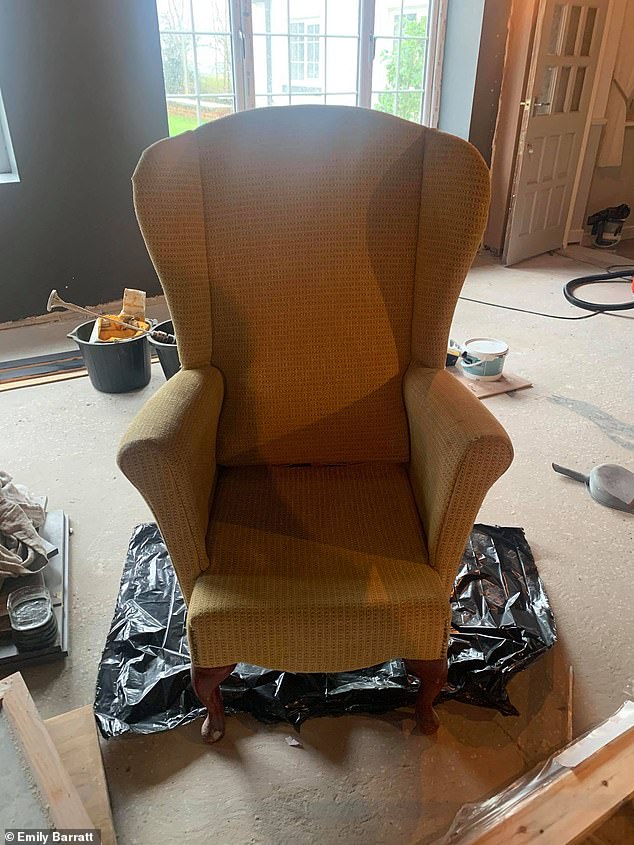 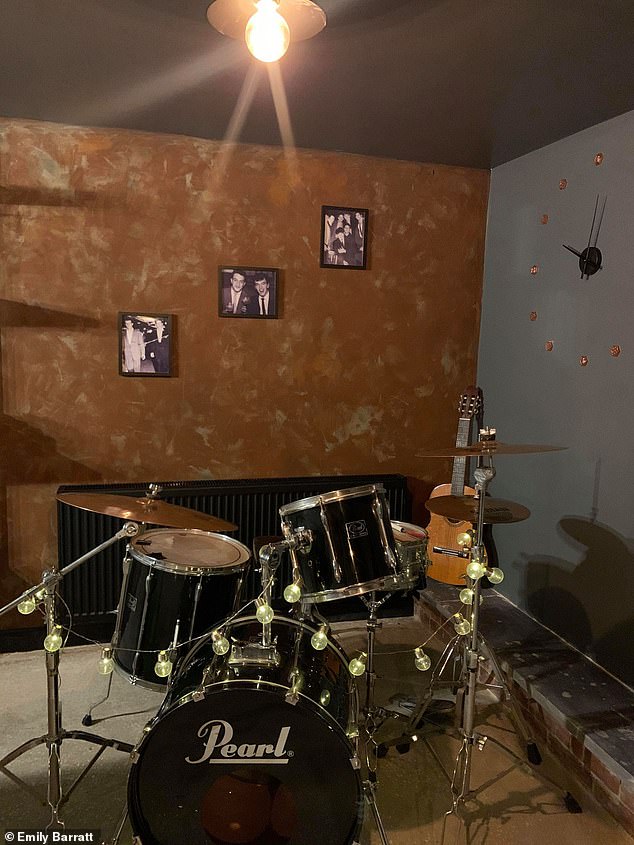 ‘I upcycled one of the chairs by painting it black, another was from our lounge and the leather one was a gift from my mother-in-law,’ she said. ‘The side table was my granddad’s. He’d had it for as long as I can remember so I wanted to upcycle it into something special.’

Emily turned it into a penny table by painting it black with copper legs, sticking pennies onto the tabletop with extra strong glue, and adding a craft resin glaze.

A drum kit sets the stage for future karaoke parties and gig nights.

‘The drum kit is my husband’s,’ she explained. ‘It has been in the loft for 10 years, so he’s very happy to have it out again and have a play.’

‘I’m really pleased with how it’s turned out,’ said Emily. ‘I still have a couple of things to finish and add to it, such as a bar beer pump that a friend gave me last year. I’ll be able to do this once the shops are open again after lockdown.

‘Our friends haven’t been able to see it in person yet, but are desperate to come and have a drink as soon as we’re allowed. We spent Christmas Day mainly in the bar, singing and dancing, so we’ve already made good use of it.’

Tom Church, Co-Founder of LatestDeals.co.uk commented: ‘If you like a trip to the pub, this home bar is the stuff that lockdown dreams are made of.

‘Making the most of the furniture and accessories you already have by upcycling them can go a long way to helping you stay on budget.’

How To Use Red Color Corrector

Parents Are Organizing Secret Playdates During the Pandemic

Paul Rudd Says He Feels 'Pressure' on Every Marvel Movie: 'You Don't Want to Be the Weak Link'