Seth Rogen has no plans to work with frequent and long-time collaborator James Franco following sexual misconduct allegations against the actor.

Speaking to Britain’s Sunday Times, Rogen said he regretted saying in a 2018 interview he would still work with Franco following the allegations, which Franco has denied. Rogan also expressed remorse over a 2014 Saturday Night Live joke about Franco dating underage woman. 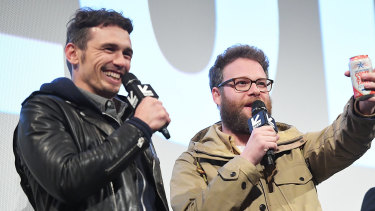 James Franco, left, and Seth Rogen at the Disaster Artist premiere in 2017. Credit:Getty

The interview addressed an April Instagram post by actress Charlyne Yi, in which she said Rogen enabled Franco on the set of 2017’s The Disaster Artist, the last project the two worked on together.

When asked whether he believed Yi’s allegations, Rogen said:

“What I can say is that I despise abuse and harassment and I would never cover or conceal the actions of someone doing it, or knowingly put someone in a situation where they were around someone like that. However, I do look back at a joke I made on Saturday Night Live in 2014 and I very much regret making that joke. It was a terrible joke, honestly. And I also look back to that interview in 2018 where I comment that I would keep working with James, and the truth is that I have not and I do not plan to right now.” 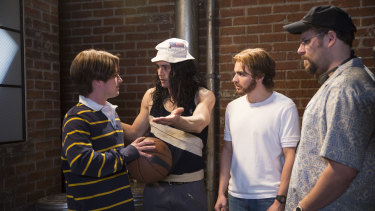 Rogen, far right, with Franco, second from left, on the set of The Disaster Artist. Credit:Justina Mintz

Rogen added the timing for the end of his professional relationship “is not a coincidence.”

In 2014, Franco, then 35, made headlines after he propositioned a 17-year-old girl on Instagram and apologised. Rogen joked about the incident on SNL, with Franco joining him on stage.

In 2018, five women made allegations against Franco of inappropriate or sexually exploitative behaviour, which the actor denied. Two students, who described the behaviour in a class Franco taught at his own Studio 4, settled their lawsuit with Franco in February.

Rogen was not specific about how the allegations have affected his long-time friendship with Franco.

“I don’t know if I can define that right now during this interview,” said Rogen. ” I can say it, um, you know, it has changed many things in our relationship and our dynamic.”

Rogen deflected a question about whether that was painful. “Yeah. But not as painful and difficult as it is for a lot of other people involved. I have no pity for myself in this situation.”

Rogen and Franco have co-starred in several projects since they appeared in the 1999 TV series Freaks and Geeks, including movies such as 2008’s Pineapple Express, 2013’s This Is the End and The Disaster Artist.