Get your laughing gear ready for this month’s Melbourne International Comedy Festival with a funny app or two. I tested Laughable, which offers a curated selection of mostly comedy-related podcasts, and Memedroid, whose community of users can view, interact with and create memes – or at least would-be memes as some aren’t funny enough to go viral.

Laughable is like traditional catch-all podcast apps in that it allows you to browse and search for podcasts, play selected episodes or download them for later listening, and subscribe to series that appeal. Unusually though, it’s focused on people rather than podcasts, particularly comedians. So while Hannah Gadsby, for example, doesn’t have a podcast, Laughable lists the podcast episodes she has been a guest on, and alerts interested users if she pops up on future podcasts. You can also click through to the website, social media and tour dates of people you’re interested in.

Memedroid is a seemingly bottomless well of user-generated visual jokes: usually the classic meme style of an image overlaid with pithy text, but also some text-heavy offerings, animated gifs, short videos and multi-frame cartoons. Users can rate and comment on them, subscribe to content creators they like, and make their own.

Expect the good, the bad and sometimes the slightly ugly of user-generated humour on Memedroid. Check the top-rated memes occasionally and you will probably get a chuckle. By chance or design, you’re bound to find a podcast that tickles your funny bone among Laughable’s curated content, including 2020 Comedy Festival guests’ offerings. 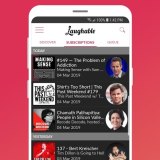 The user-friendly interface includes playback at up to 2.5 times normal speed, and forward or back 15 seconds. The search function handles typos, so it figures you’re looking for Arj not Ark Barker, and users can request additions to the generous suite of podcasts available. The various browse sections include some non-comic categories, including musicians and tech titans. Following certain people could also lead to happy discoveries, as you might like podcasts they are guests on.

The content’s often scrappy nature distracts from a sensible interface. Dropdown options include top-rated (daily, weekly and monthly) memes, your favourites, and the "meme factory". This includes images you can easily add text to then upload to the app, or use elsewhere including other social media. An apparent bug hinders using your own photos within the "meme factory", but it’s simple via the separate meme-maker button. This app contains ads, and inappropriate content is reasonably well moderated. 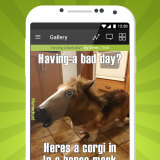 The Unrd app offers mobile entertainment of a different kind, from mystery to romance. It overlays a faux interface on your device, and over several days reveals a character through his or her messages, photos, videos, audio and social-media profiles. Unlike other similar apps that are more puzzle-based games, Unrd tells a story, and there are several to choose from.

Singer Justin Townes Earle Cause of Death Revealed as 'Probable Drug Overdose,' According to Police

Josh Duggars Lawyers Speak Out, Plus His Possible Prison Time Has Been Revealed

How Georgia fought her way into the RAF boys' club