There was once a time, just two short years ago, before "Weinstein clauses" and "Weinstein taxes", before "intimacy coordinators" and "disgrace insurance".

Before, in other words, the #MeToo movement and its chief villain Harvey Weinstein tore through corridors of power and prompted a global reckoning for rich, powerful men. 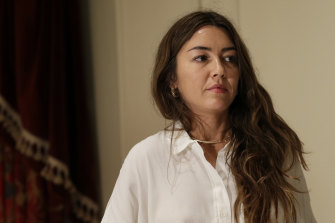 Mimi Haleyi testified that Harvey Weinstein raped her in his New York home in 2006. Credit:AP

Additionally, new guidelines have already been passed that directly target the bad behaviour that Weinstein practiced. The Screen Actors Guild-American Federation of Television and Radio Artists released a guide on the use of "intimacy coordinators" who help prevent abuse during nude and sex scenes. It also opposed meetings and auditions in hotel rooms and private residences. If a meeting has to take place in such "high-risk" locations, the union recommends its members bring a "support peer" to act as chaperone.

At the same time, a new California "casting couch" law clarified that sexual harassment law applies to producers and directors and their informal professional relationships.

Many of the tools that Weinstein and others used to keep their behaviour out of the public eye have come under attack. Some of the biggest US corporations – including Facebook Inc, Alphabet Inc's Google, and, most recently, Wells Fargo & Co – have ended forced arbitration for sexual harassment claims. The dispute resolution process, which forces workers to resolve their complaints behind closed doors, can cover up misconduct from repeat offenders.

The once commonplace non-disclosure agreement (NDA) is now viewed as a way for individuals and corporations to buy silence for criminal or unsavoury behaviour. Around a dozen states in the US have passed legislation banning their use for sexual harassment settlements (although most laws don't fully invalidate them). In the wake of harassment allegations, NBC Universal agreed to release some former staffers from NDAs.

Just last week, Conde Nast and Bloomberg LP both said they would stop using the agreements to settle harassment-related complaints. (Bloomberg's change came after founder Mike Bloomberg was criticised in a Democratic presidential debate for their usage. He also said he would release three women from non-disclosure agreements with his company.)

And when firms do pay out harassment-related settlements, the so-called "Weinstein tax" prohibits individuals and companies from writing off the money, as a result of the 2017 tax bill.

There's also some evidence that office norms have adapted to a new era. In a survey of 1000 executives, a third said they've adjusted their behaviours since #MeToo, such as watching their language and avoiding unwanted touching at work. At the very least, there's an awareness that actions have consequences.

"#MeToo is so far the most successful effort to change the ground rules," said Louise Fitzgerald, an emeritus professor of psychology and gender and women's studies at the University of Illinois at Urbana-Champaign.

Not all the changes have been positive. Some men on Wall Street, and elsewhere, have decided it's better to avoid women completely. This could lead to fewer opportunities for women in fields in which they're already under-represented and under-mentored. In surveys, female employees say they don't think their own workplaces have changed since #MeToo, and many say they still fear retaliation for reporting harassment. Some of the most prominent accused are making professional comebacks.

Indeed, some organisations have made moves more self-protective than introspective. The Weinstein clause has become a fixture of merger agreements on Wall Street. If an accusation of harassment surfaces after purchase, the buyer can recoup some of the costs, the clause says.

Companies can also purchase disgrace insurance to limit damages from incidents like the kind that cost Imperative Entertainment $US10 million ($15.1 million) in 2017 after Kevin Spacey became embroiled in a sex scandal. The production company had to pay to reshoot All the Money in the World with a new lead actor. SpottedRisk, a Boston-based insurer, now offers policies for such events marketed at movie studios, brand advertisers, sports leagues and music labels – with limits starting at $US10 million.

A conviction, if anything, confirms the need for these changes and more.

"Here is the biggest #MeToo offender of them all, and he is going to spend possibly the rest of his life in prison," said Stuart P. Green, a criminal law professor who studies sexual misconduct. That "couldn't help but have the effect of confirming some of the validity of the #MeToo movement".

Kylie Jenner Dragged For Tweeting THIS On Election Night!