China's greatest swimmer risked his career, his reputation and his legacy on a bureaucratic dispute with drug testers over whether they were properly accredited to take a blood and urine sample from him when they visited his home nearly 18 months ago.

After a three-month deliberation, the Court of Arbitration for Sport found the three-time Olympic champion guilty of tampering with a blood sample during an epic folly at the athlete's Hangzhou villa, when drug testers came to his home and, following a protracted confrontation with Sun Yang, his mother and his entourage, left empty handed. 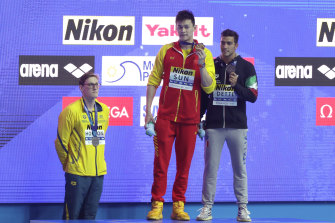 Sun Yang, who has been banned for eight years, and Mack Horton at last year’s world titles in South Korea.Credit:AP

For Mack Horton, the swimmer who called Sun Yang a drug cheat before their Olympic showdown in Rio and caused an international incident when he refused to share a medal dais with his Chinese rival at last year's FINA world championship in Gwangju, it is vindication, but hardly sweet.

As Horton said from Adelaide, where he is in camp with Australia's best freestyle swimmers: "My stance has always been for clean sport. It is not, and never will be about individuals or nations. Today's outcome does not change my stance."

The penalty against Sun Yang is an eight-year ban but effectively, it is a life sentence. He is 28 years old and was already in the final laps of his international career. Unless Sun Yang can successfully appeal this decision before the Swiss Federal Court – the same jurisdiction where he tried and failed to have the entire case thrown out prior to the CAS hearing – there is no coming back from this.

The greatest men's freestyle swimmer of his generation, the winner of more world championship titles than any swimmer other than Michael Phelps, has been banished from his sport. He will be remembered not for the medals he won or world records he broke but for the spectacular fashion in which he unsealed his fate; with a hammer, in the dead of night, by the light of a mobile phone.

It is a wretched outcome for FINA, a governing body which prior to this case was already perceived as weak on doping and compromised by its commercial reliance on Beijing.

It is a devastating decision for highly respected Australian swim coach Denis Cotterell, who has worked on and off with Sun Yang since he emerged as a teenage protege at the Beijing Olympics. Cotterell has dismissed allegations of systematic doping by Chinese swimmers and declared Sun Yang as clean as his other most celebrated swimmer, Grant Hackett.

Sun Yang successfully argued before a FINA anti-doping panel in late 2018 that he was entitled not to submit to a urine test and retrieve a blood sample he had previously given because of the unprofessional conduct and lack of accreditation of the three-person testing team.

That decision, however, came with a warning. Sun Yang refused to co-operate with testers under the guidance of his mother, Ming Yang, and on the advice of his doctor, Ba Zhen, the same medico who provided Sun Yang with a banned heart medication in 2014.

The FINA panel noted the case had been a "close run thing" and Sun Yang was "foolish in the extreme" to wager his career on his understanding of anti-doping procedures.

The World Anti-Doping Agency was flummoxed by the decision. Richard Young, the WADA lead counsel who earned his anti-doping stripes prosecuting the case against Lance Armstrong, told last November's CAS hearing in Switzerland that, as sensational as it was for Sun Yang to break into a secure box with a hammer to retrieve his blood samples, he was cooked from the moment he interfered with the testers doing their work.

"It is one thing, having provided a blood sample, to question the accreditation of the testing personnel while keeping the intact samples in the possession of the testing authorities,'' CAS said in a media release.

"It is quite another thing, after lengthy exchanges and warnings as to the consequences, to act in such a way that results in destroying the sample containers, thereby eliminating any chance of testing the sample at a later stage."

Whether Sun Yang had banned drug in his system that night or is merely a victim of his own hubris will never be known. The judgment detailing how the three CAS panel members came to their decision will be published next week.

8 Sex Toy Deals That Are Better Than Any Human Valentine

Sweaty Group Workout Classes Have Been Linked to Coronavirus Infections

Meghan King Reveals Son Has Cerebral Palsy – And Ex Jim Edmonds Claims He Had No Idea!

Doctor Pens Passionate Memo to Colleagues: 'Forget You Are a Cardiologist. You Are a COVID Doctor’