‘The Talk’s Elaine Welteroth chatted with us about her days as EIC at Teen Vogue and discovering Amanda Gorman before the rest of the world during Black History Month.

One of The Talk‘s newest co-hosts, Elaine Welteroth, 34, knew about poet and activist Amanda Gorman, 21, well from her days as Editor in Chief of Teen Vogue — so it’s no surprise seeing the rest of the world catching on to her beauty. “She is black history in the making,” Elaine told HollywoodLife EXCLUSIVELY during an episode of TVTalk on Instagram Live on Feb. 25 where she discussed the importance of Black History Month. “She was actually one of Teen Vogue’s 21 under 21 that celebrated extraordinary people doing things under the age of 21. She was on that list. We’ve seen her brilliance for a long time.”

Amanda became a household name after delivering a moving poem at the Inauguration of President Joe Biden, 78, and Vice President Kamala Harris, 56, on Jan. 20. Reciting “The Hill We Climb” in front of millions of people only days after the deadly riot at the Capital in Washington D.C., the youngest inaugural poet in U.S. history continued to catch everyone’s attention. On Feb. 7, Amanda was the first poet to perform at the Super Bowl, reciting “Chorus of the Captains” which was aimed at the front line workers who have been saving lives during the coronavirus pandemic. 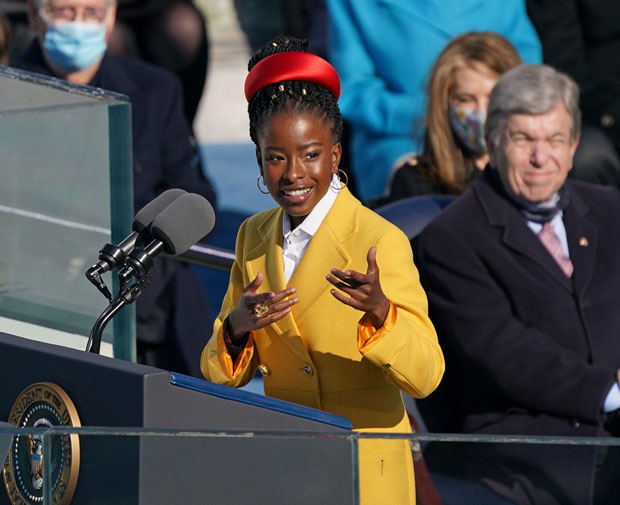 After parting ways with Teen Vogue in 2017, Elaine is not at all surprised to see Amanda making a name for herself all these years later. “It’s so incredible to watch her have this national — This global stage that is watching her,” Elaine added. “That is celebrating her, that is learning from her.”

Elaine grew emotional during a recent episode of The Talk after opening up about her own struggles growing up as in a mixed race household. “I could not watch it back,” Elaine said. “I think you’re asking an interesting question that if I had a Kamala Harris and if I could have a roll in terms of being a multicultural woman. A black woman who comes from mixed race heritage who is well regarded and who speaks openly about her cultural identity and individuality of it all. And her pride, but really acknowledging her blackness. Racial identity is so beautifully complex and we don’t really talk about mixed race identities really often. So I don’t know. Maybe I would’ve felt a little different.”

For now, Elaine is excited to watch the girl she knew about back in 2017 continue to soar. “Her future is so bright that she does have that quality that brings people together across color lines, across generational divides. This is the very, very beginning of what will be an impactful journey for her.” You can catch Elaine and her fellow co-hosts weekdays on The Talk at 2pm est/1pm pst on CBS.

Amid COVID pandemic, flu has disappeared in the US

Is Chinese Food Bad For You?