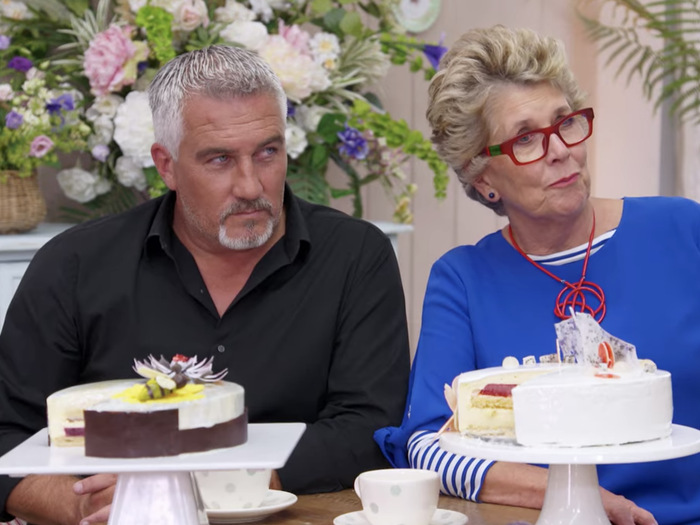 Warning: Spoilers ahead for "The Great British Baking Show."

"The Great British Baking Show" — or "Bake Off" if you're watching it in the UK — just aired this year's finale, capping off a season filled with drama and controversy from start to finish.

The show, which has been on the air since 2010, has followed a similar format for the last 11 seasons: a group of home bakers are tested on their skills in the kitchen each week through three grueling rounds. At the end of each episode, one contestant is eliminated, while another is crowned "star baker," culminating in a face-off between the last three contestants in the finale episode.

Despite the consistent format of the show, this season has been significantly more drama-filled than previous ones. Multiple episodes sparked viewer outrage online, and there were even a few dramatic moments inside the tent.

Between a contestant accidentally ruining another's cakes to the show being criticized for its mishandling of cultural bakes, here's a definitive timeline of all the controversial moments on this season of "The Great British Baking Show."

"The Great British Baking Show" got off to a messy start this year. In the very first episode, "Cake Week," one contestant accidentally slapped a fellow baker's cakes to the floor.

For the technical round, the contestants were asked to present six identical pineapple upside-down cakes to judges Paul Hollywood and Prue Leith.

As baker Sura placed her tray on the judging table, she tried to swat away flies from her cakes — and accidentally knocked fellow baker Dave's cakes to the ground in the process.

To make matters even more awkward, Sura won first place in the challenge, while Hollywood called Dave's cakes "burnt and over caramelized" and noted that the issues with them had nothing to do with being dropped on the floor.

"It's bittersweet because I feel so sad for Dave. I wish it didn't happen to be honest," Sura said to the cameras after the challenge.

Even the official Twitter account for the show chimed in with a tweet that jokingly asked viewers to "spare a thought for the tent carpet too!"

Both Sura and Dave were spared elimination that episode, but the moment got a lot of chatter among fans.

In the earlier seasons of "The Great British Baking Show," original cohosts Mel Giedroyc and Sue Perkins started most episodes by trading banter while introducing the week's theme.

The show has adopted a slightly different format in recent seasons: Before the competition begins, episodes often begin with an opening sketch. The brief scene typically features a pun, a corny play on words, or even elaborate costumes. They're goofy and sometimes cringeworthy, but not typically offensive.

This year, though, viewers were displeased with a number of the show's opening scenes.

Twitter users said that the very first cold open of the season — new cohost Matt Lucas' Boris Johnson sketch in the first episode's "Cake Week" — seemed to make light of the coronavirus pandemic, calling the bit "distasteful." The Independent reported that Ofcom, the UK government agency that regulates TV and broadcasting, had received more than 200 complaints about the bit.

And there was more outcry after the "small hand" scene that opened the season's third episode, "Bread Week."

In the scene, cohosts Noel Fielding and Lucas pretend to discover a box containing the arm Paul Hollywood uses for his infamous handshakes, which he gives out to contestants on rare occasions to acknowledge exemplary bakes. Hollywood walks up and scolds them for messing around with his hand, showing off a fake tiny doll hand where his ordinary hand would usually be.

The Independent reported that paralympian Carly Tait was among the viewers criticizing the show's use of a small prosthetic hand prop in the sketch, and Ofcom recorded 70 complaints about it.

"Oi @Channel4 do you need a #disabled expert or D&I consultant in your organisation as I would love to explain to you why the use of small hand as a comedy prop in #GBBO by @PaulHollywood IS NOT ACCEPTABLE," Tait tweeted.

During the third episode of the season, "Bread Week," the contestants were asked to make rainbow bagels in a technical challenge set by Hollywood.

"The rainbow colors, for me, although it originated over in the States, I think it represents the NHS for me," Hollywood said to Leith, speaking of the UK's National Health Service.

Hollywood's comments didn't sit well with viewers. Mashed and MailOnline reported that Ofcom received complaints from viewers who were unhappy that Hollywood chose to associate the rainbow with the NHS rather than the LGBTQ community.

Forbes reported in May that during the pandemic, the rainbow flag has grown to become synonymous with the NHS, and some in the LGBTQ community felt uncomfortable with that.

Separately, other viewers took issue with Hollywood's idea of a bagel. Shannon Sarna of The Nosher criticized the time allotted to make the bagels and Hollywood's comments that a crispy bagel is "overdone."

"I'm not sure he has ever visited New York City, or even tasted a bagel," Sarna wrote.

She added that a solid bagel recipe requires that the dough be allowed to rise overnight.

"I knew that to make a bagel in the total allotted time of 2 hours and 45 minutes was just ridiculous," Sarna wrote. "And the result of the bakers' bagels proved that it was a disaster."

The bakers struggled to conquer brownies during 'Chocolate Week'

For the first challenge of the fourth episode's "Chocolate Week," the signature challenge, the bakers were tasked with making a batch of 18 chocolate brownies. And apparently, none of them quite knew what a brownie is supposed to be.

Fielding and the contestants echoed each other when pointing out that while brownies are easy to make, the time allotted, an hour and a half, makes things tricky.

"To get them cooked, cooled, and ready in an hour-and-a-half is going to be tough," baker Laura said to the cameras during the challenge.

"This, for me, is going back to basics. If you can't produce a decent chocolate brownie, there's going to be problems," Hollywood said.

The judges didn't seem impressed with any of the finished brownies.

Hollywood said Laura's Italian meringue brownies were "too sweet," baker Linda's brownies were like sponges rather than brownies, and that Lottie's batch looked like "they've been dropped."

"We've all done a botched job of our brownies," contestant Sura admitted to the cameras after the challenge was over.

People took notice online too, with some calling the brownies challenge "an absolute disgrace."

To be fair to the show's contestants, the brownie is an American treat — it's thought to have originated in Chicago in the early 1890s, according to Forbes — though it's still a popular treat in the UK.

For the technical challenge on the season's fourth episode, "Chocolate Week," Hollywood asked the bakers to make chocolate babka, a sweet bread that's deeply ingrained in Jewish culture. As typically happens during each episode's technical challenge, Hollywood and Leith sat at a table discussing the bake and taste-testing Hollywood's version of the treat as the bakers began making it in the tent.

Some viewers took issue with how Leith praised Hollywood's version of the babka, saying the babka she had eaten in New York was "not nearly as nice as" the one Hollywood had made. While babka is said to have originated in eastern or central Europe, it's especially popular in New York City.

Several fans tweeted that Leith clearly hadn't had real babka in New York, with many suggesting she try Breads Bakery, which is said to make New York City's best babka.

Breads Bakery owner Gadi Peleg told Insider that babka is "part of the culinary language" of the city, and that he'd like for Leith to try it at his bakery.

The show attracted a lot of negative attention for its "Japanese Week" episode, with people on Twitter saying that the challenges didn't include a single traditional Japanese dessert. They also noticed that the contestants used pan-Asian ingredients which perpetuated the racist stereotype that all Asian cultures are the same.

Twitter users also called out cohost Lucas for an insensitive comment when he jokingly pretended to mishear a contestant's katsu curry as "cat poo" curry.

Insider spoke to pastry chef Tomoko Kato of Patisserie Tomoko, who didn't take an issue with the nontraditional ingredients and instead said that that Japanese cuisine has "room for both traditional and nontraditional" baking.

Kato did add that it might be a good idea for the show to incorporate more traditional Japanese desserts, like the Japanese cheesecake, if they attempt a similarly themed episode in the future.

There's been no shortage of controversial eliminations over the course of the series' 11 seasons, where a fan-favorite contestant leaves the tent over another baker viewers think should have left instead. But few have sparked as much ire as Hermine being sent home over finalist Laura in the show's ninth episode, the "Pâtisserie Week" semifinal.

Fans were devastated over Hermine's elimination, which came after she opted to improvise her final showstopper challenge recipe and ended up with a lopsided cube cake "failure." Hermine was the season's last remaining baker who is a person of color.

Some viewers upset by Hermine's departure turned on Laura, saying that they felt Hermine's track record was stronger than Laura's on the show. Laura became the target of online bullying, prompting her to speak out against her critics on twitter, writing: "It's ok to be sad your favourite person didn't go through, but please remember it's not my fault. I don't make the decisions."

"It's easy to sit there on your sofa and judge,"Adlington wrote."But I am a real person with feelings. Please take a moment to consider your words before you judge someone you've never met and whose food you've never tasted."

Hollywood himself took to Instagram to ask viewers to "stop trolling" the bakers, reminding fans that "each week stands on its own" and that "it never matters what any baker has done in previous weeks" to explain why Hermine's stronger track record wouldn't have saved her over Laura.

"Please don't be unkind in my name. I am all about #love and #kindness. Honor my time in GBBO by showing love and kindness. Behind what looks like characters on your tele are real people," she wrote.