Giants of the dunes: Shimmering deserts and enthralling wildlife – this tour across Namibia is an adventure like no other

There is rapt, utter silence. We have watched for the best part of an hour as the stately procession makes its way to the waterhole to drink.

A chaotic medley of antelopes arrives first. They give way to a herd of zebras, who in turn scatter to make space for a wary couple of giraffes. Three, now five more, can be seen in the distance, loping closer.

But now the gaze of 18 people is fixed on the two giraffes, who have already approached the water’s edge and turned away. Will they, won’t they, stoop ungainly to drink? 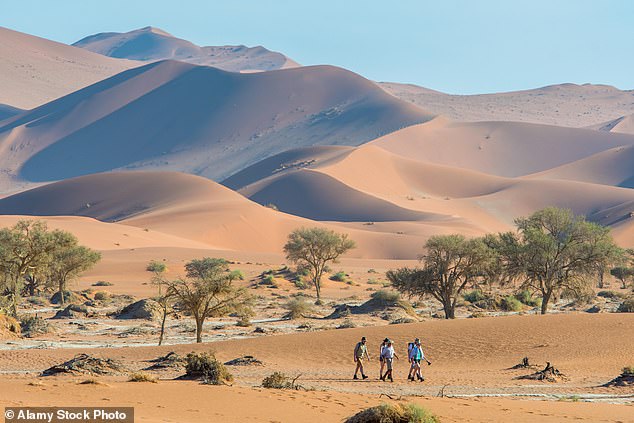 Majestic scenery: Tourists stroll among the sand dunes at Namib-Naukluft National Park in the Namib Desert

The sun is fast setting and our bus has 15 minutes to reach the gates before they close. Hence the disappointment when we leave as the first giraffe still ponders whether to risk a sip.

We are nearing the end of a two-week road trip through Namibia, finishing in Etosha National Park, a glorious highlight in this vast, spectacular and largely empty country.

Etosha includes Namibia’s vast northern salt pan, with its shimmering desert landscapes and abundant wildlife. The country lies to the north-west of South Africa and west of Botswana, and is generally reached by air via Johannesburg.

The short flight to the capital, Windhoek, affords views over Namibia’s dramatic red dune landscape that is its trademark. This is a huge country, larger than Turkey or France, but with a population of only 2.5 million.

I am on an escorted tour, travelling in a comfortable coach large enough for 30.

The dunes of Sossusvlei in the south are still dark when we set off on a white-knuckle ride — you have to assume the driver does this every day, and that the tyres can cope with the sand.

It is the landscape — wind-driven dunes in the south and vast rock jumbles further north, which glow crimson at sunrise and sunset — that sets Namibia apart from its neighbours in southern Africa.

Aside from city hotels in Windhoek and Swakopmund, we stay in game lodges.

Inland from the bleak Skeleton Coast — where many ships once foundered — we drive to Namibia’s first Unesco World Heritage Site, in a landscape that could have inspired Frank Gehry’s architectural wonders.

Twyfelfontein boasts 6,000-year-old rock carvings of birds, beasts, fish and other marine creatures — evidence that inlanders even then had contact with the sea.

Some gentle clambering brings you eye to eye with the images. 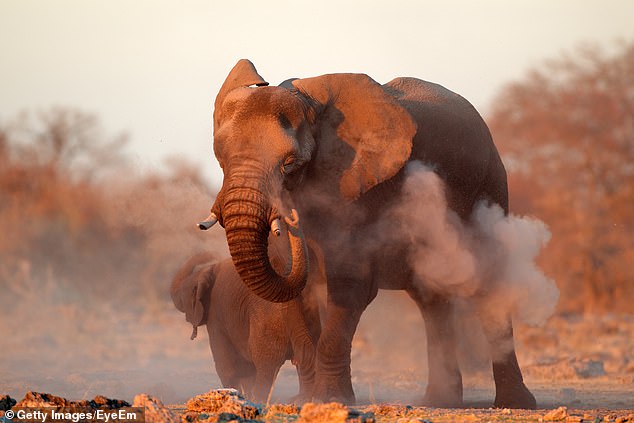 ‘Aren’t you worried about damage?’ I ask.

‘Why would we? The carvings have survived thousands of years in all weathers.’

At the foot of nearby Burnt Mountain, our guide notices four hikers who have set off up the red slope.

‘Stop,’ he says, pointing to the notice that bans walkers from the rocks. A stern mini-lecture follows on the fragility of the landscape, and the hikers reverse track.

Windhoek, where most tours start and end, is so close to the wild you can see monkeys and gazelles by the roadside on leaving the airport.

It is not without its strange reminders of history. Beside the Independence Memorial Museum (built by North Koreans), on a mound overlooking the city, is a monument to freedom, and behind that the decaying, old German fortress.

An elderly custodian emerges. ‘Come up, come up,’ he beckons, as I tackle the stone steps. 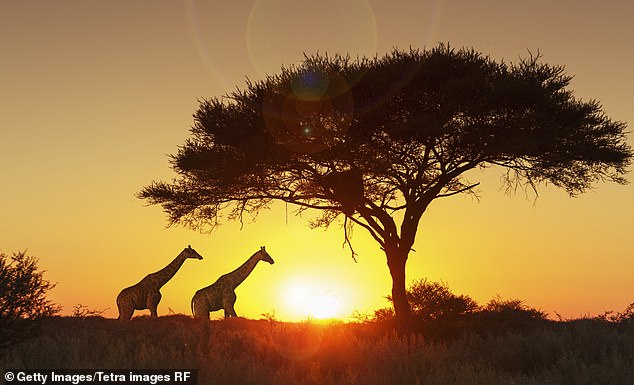 Two giraffes pictured under a tree at sunset in Etosha National Park, Namibia

In an overgrown courtyard is a huge equestrian statue, built as a monument to fallen German soldiers in 1911. It doesn’t fit into today’s Namibia; the Germans don’t want it either, so there it is, trapped.

This road tour from Riviera Travel covers a sometimes gruelling 1,700-mile circuit, but there is wildlife to rival the game parks of Kenya and South Africa, desert scenery equal to that of America’s south-west; and people who are curious, generous and proud of their country. A bonus in most places is tap water you can drink.

Yes, the distances are long, and I would have loved another day at coastal Swakopmund, and to have stayed past sunset at Etosha — not least to see if that giraffe ever got his drink.

Riviera Travel’s Namibia 14-day/13-night tour includes South African Airways flights from the UK to Windhoek via Johannesburg, all ground transport, accommodation, most meals and trips, plus the services of a tour manager, local guide and driver. Trip costs from £3,149pp, plus a supplement if travelling solo (rivieratravel.co.uk).