THOUSANDS of West Ham fans have gathered in protest against the club's board ahead of today's game with Southampton.

Many supporters are unhappy with David Gold, David Sullivan and Karren Brady's running of the club and have organised a march as part of ongoing action against the Hammers' hierarchy. 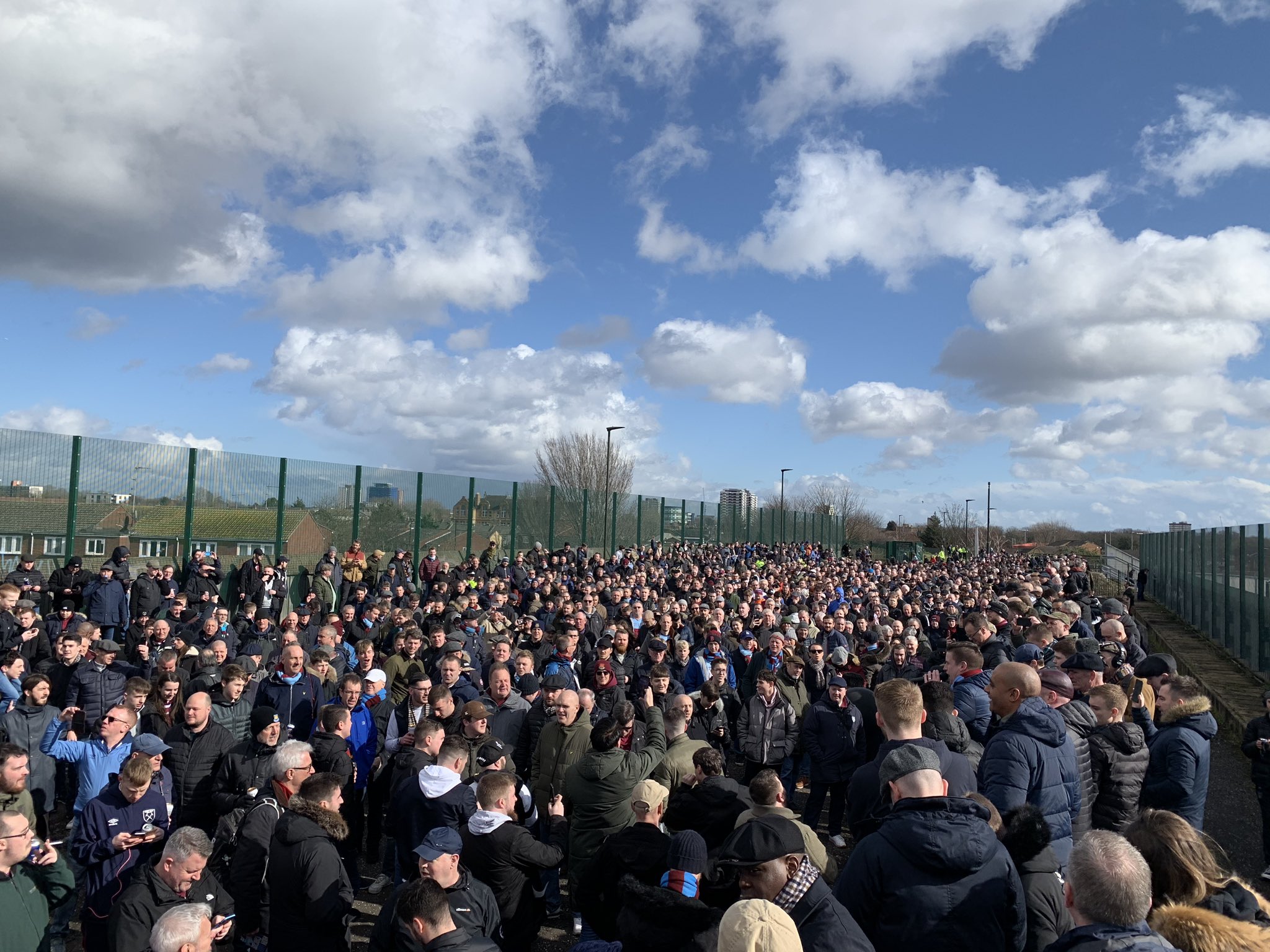 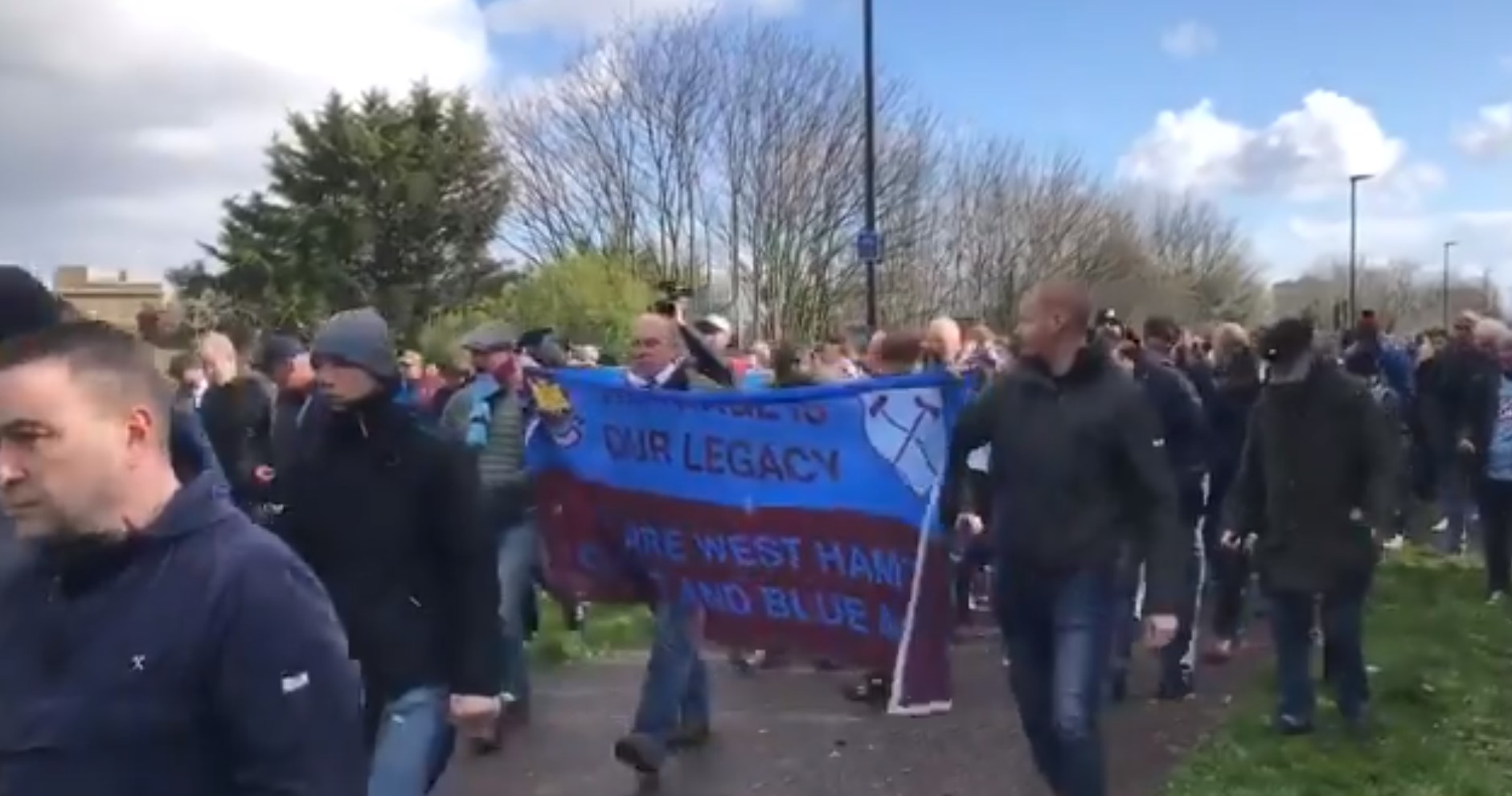 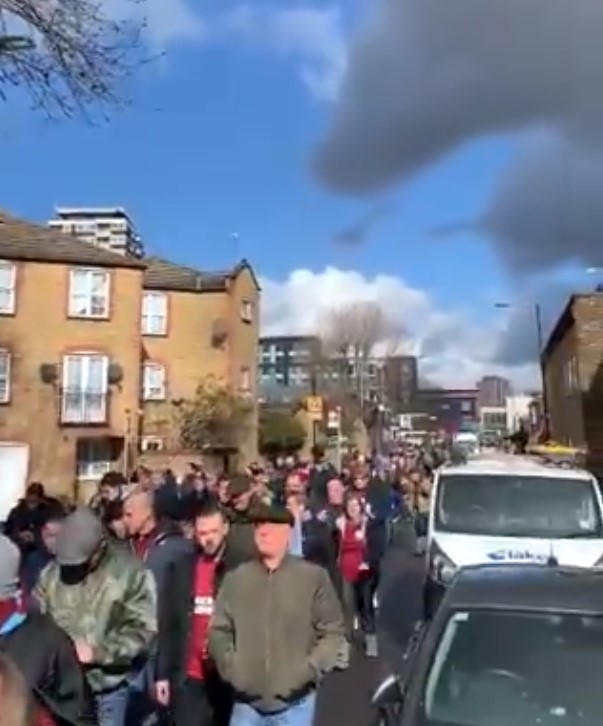 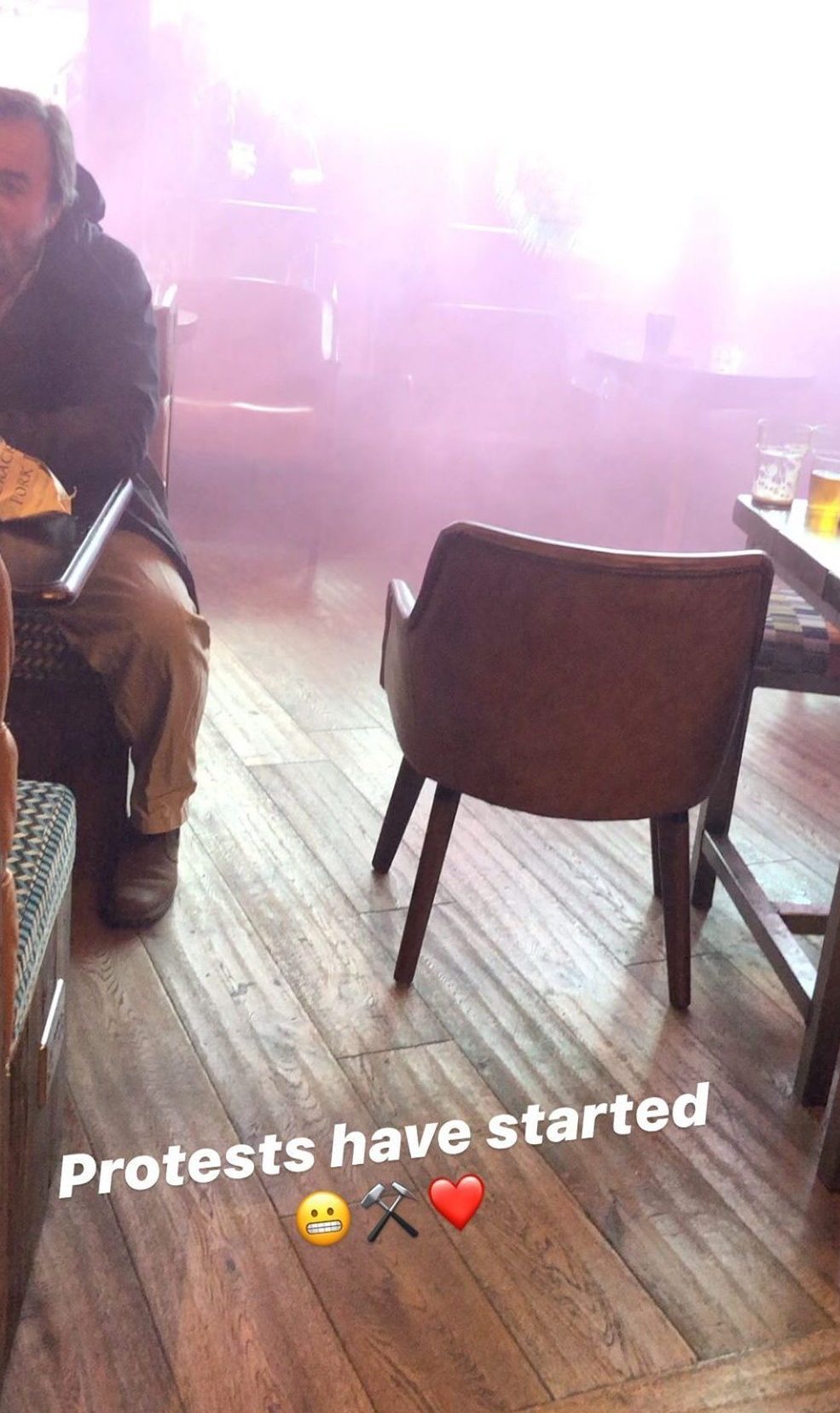 A flare was let off in the Abbey Tap pub in Stratford but the protests have remained largely peaceful elsewhere.

Supporters were pictured marching through the streets singing "F*** off Gold and Sully, it's all lies lies lies!" as they made their way toward London Stadium.

West Ham currently sit 18th in the Premier League and fans feel aggrieved at the club's performance since their 2016 move from Upton Park to the former Olympic arena.

A similar protest was arranged before the Everton home game last month but it was not as widely attended.

Reports put that number between 900 and 2,000 but images from today suggest a far greater turnout.

Supporter group Hammers United – whose chairman Paul Colborne is banned from West Ham for planting a corner flag in the centre circle against Burnley in March 2018 – are the main body behind the action. 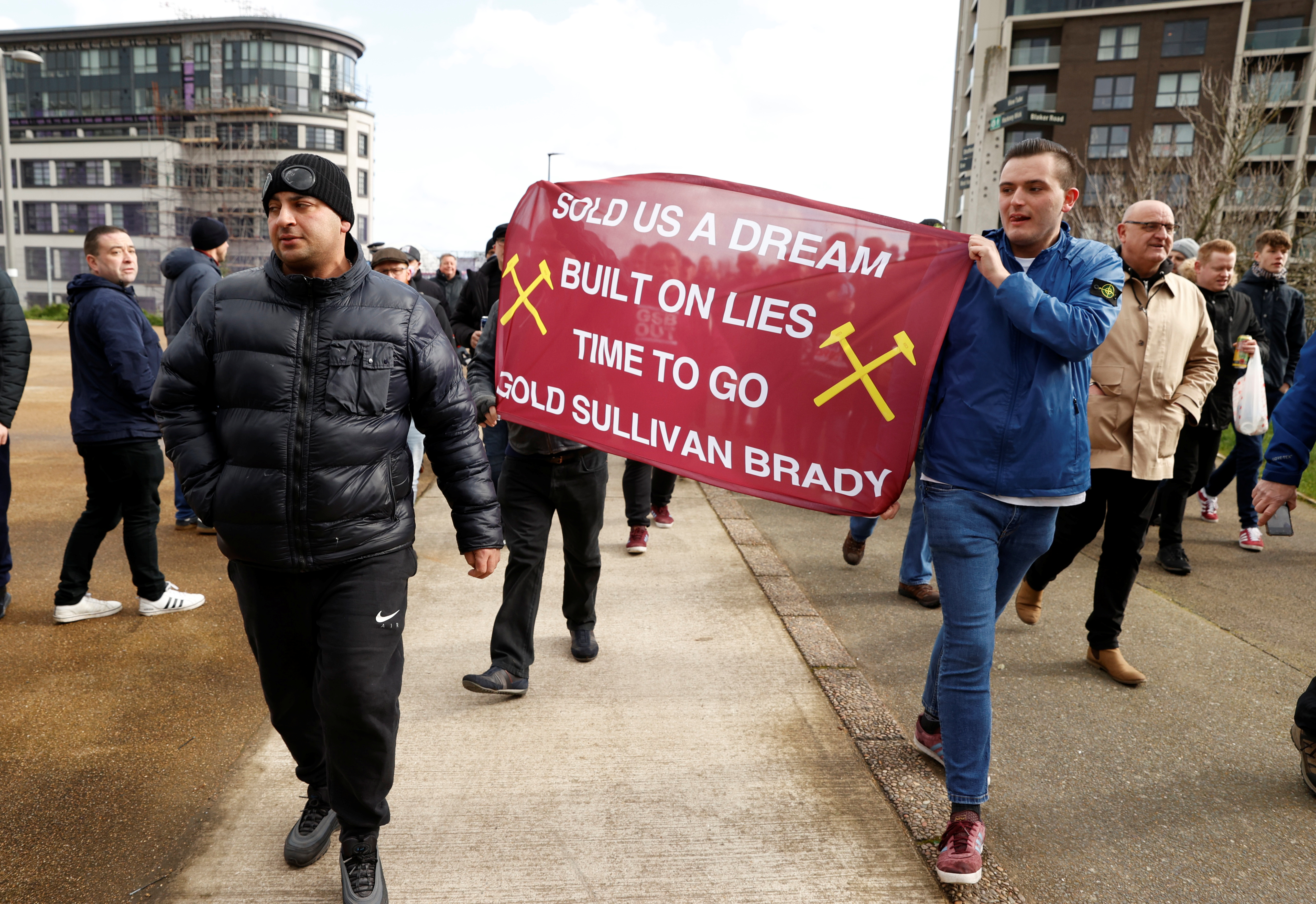 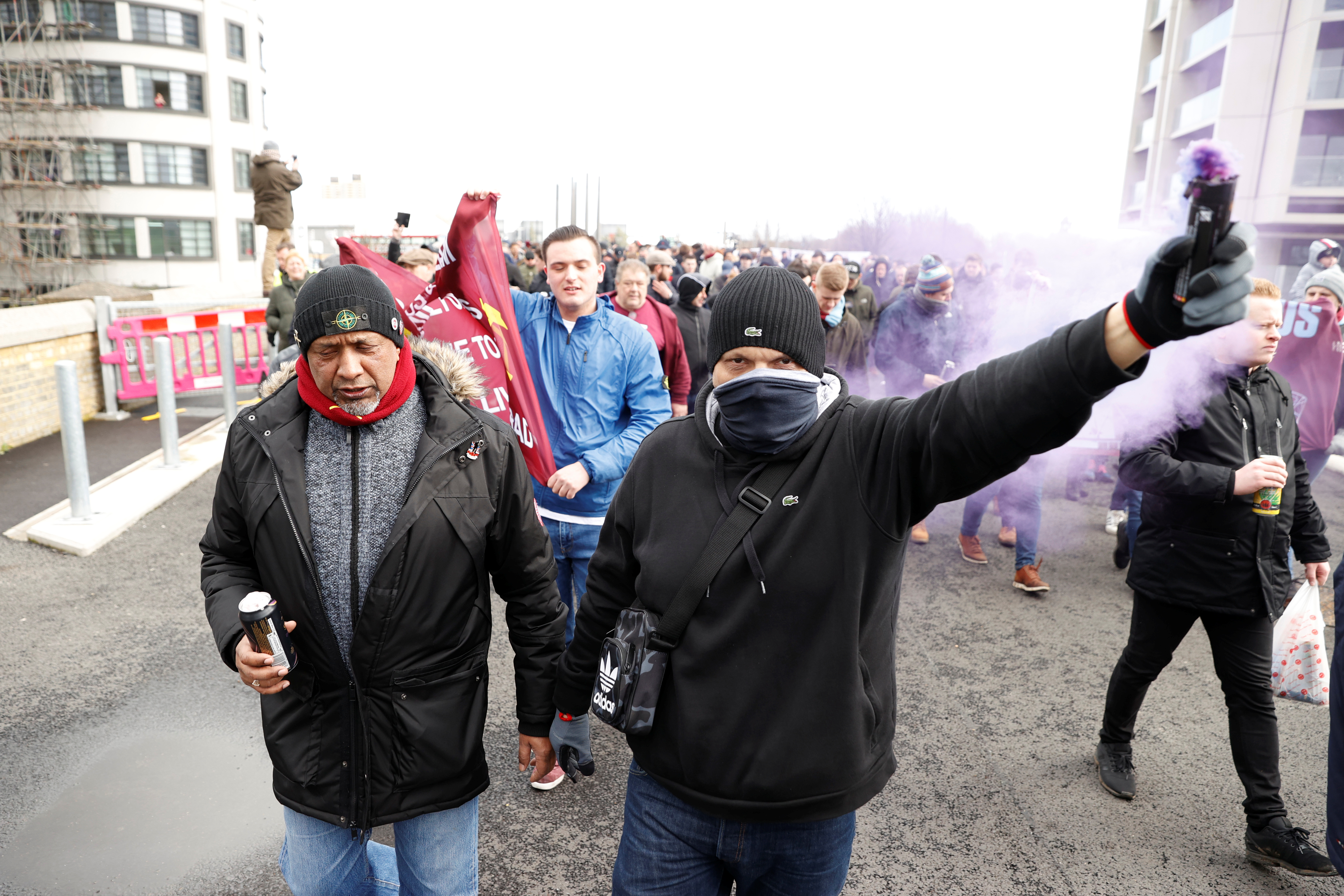 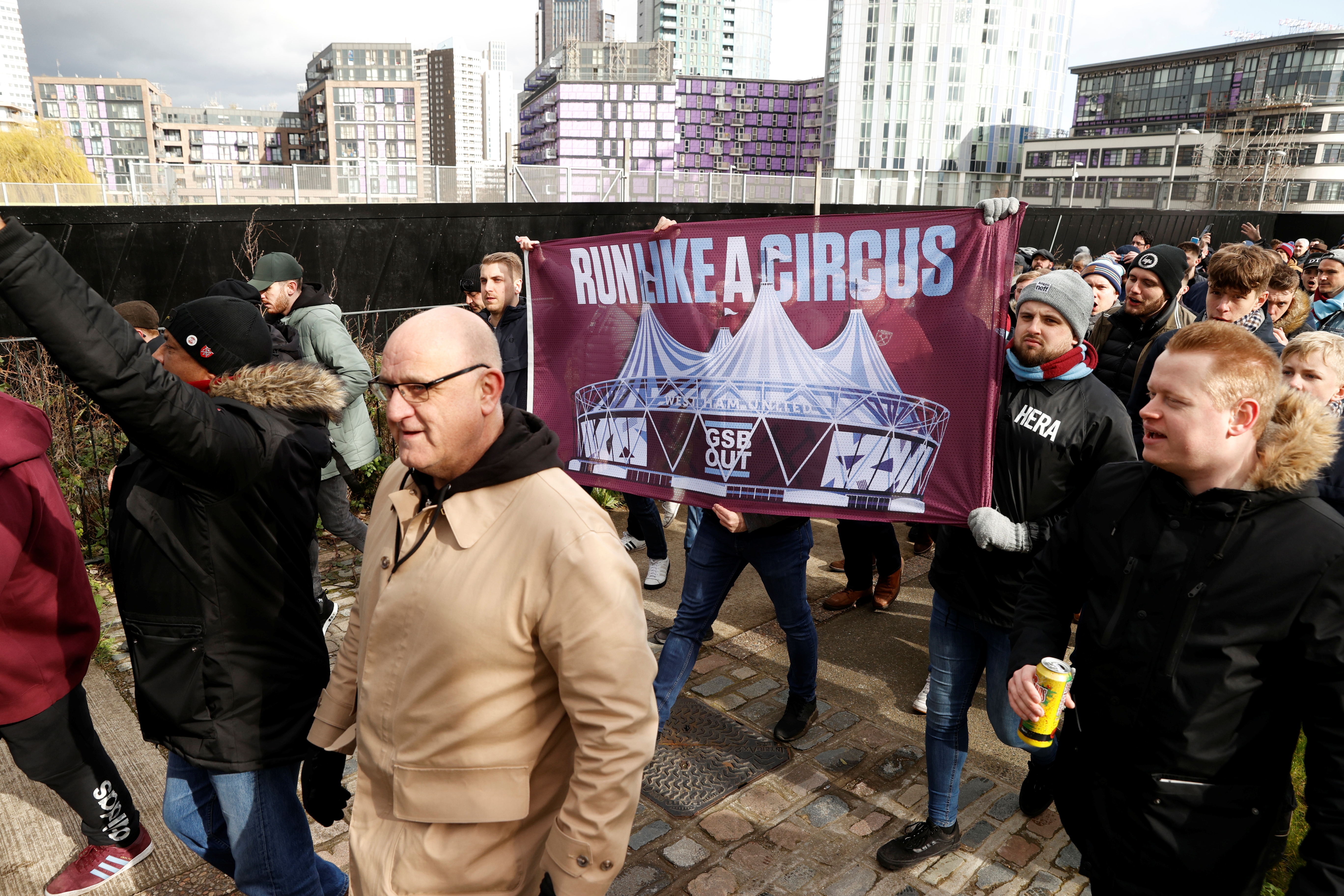 In a recent interview with the Telegraph Colborne said: "In my opinion, the owners have killed a football club with the move.

“Sullivan and Gold also love to tell people that they do not take a salary. Maybe not, but they have taken £18.6m in interest payments on their loan.

"We believe that the board have seriously underestimated us and that we can force real, big change."

Hammers United – who boast more than 12,000 members – claim their original goal was constructive dialogue with the club but having repeatedly found that hard to come by have decided anti-board action of this nature is the only way to proceed.

Colborne added: "In the short term, just stop all this wriggling and talk to us.

"Just agree to a meeting with us, Hammers United and a representative of the FSA.

"That would be a good start and, hopefully, a start from which everything else could follow.

"We’d also like to see some evidence that there is a strategy and a plan for the direction of the club because that appears to have been sadly lacking.”

West Ham recently postponed a fans' meeting with the club's board originally scheduled for Tuesday 25 February after Hammers United refused to take part due to the attendance of the 'Official Supporters Board'.

The club now plan to overhaul the 'OSB' and will introduce democratic elections to ensure dialogue with all supporters groups rather than just some.

Having engaged the Football Supporters' Association, the Hammers will also appoint an independent company to administer the election process.

West Ham have suggested a new meeting date for May – once the election process is complete – and the board have committed to attend and answer all questions put to them.

Gold, Sullivan and Brady took charge at West Ham ten years ago with the club in dire financial straits after the calamitous Icelandic stewardship of Eggert Magnusson and co.

The Irons were £110m in debt at the time but were recently named the 17th richest club in Europe by the latest Deloitte football money league.

The Rock Shared His Best Advice for Getting Back Into Training

Rihanna Shares Photos from Her Visit to the Lorraine Motel: 'Can't Describe the Feeling That Came over Me'