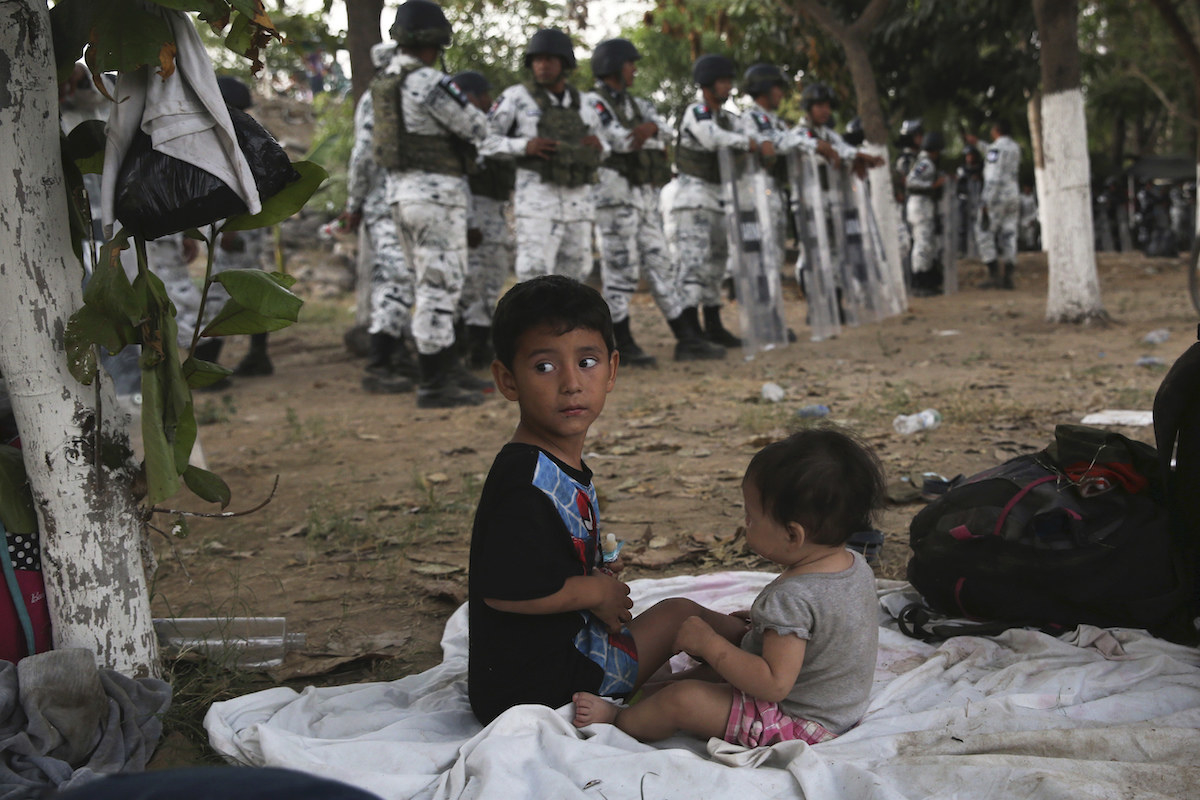 A couple of immigrant children camp out on the Mexican shore of the Suchiate River on the border with Guatemala, with a line of Mexican National Guard members behind them, Jan. 20.

A federal appeals court on Friday blocked the Trump administration’s policy of forcing asylum-seekers to wait in Mexico while their cases are processed in the US, delivering a major setback to efforts to restrict migration at the southern border.

The so-called Remain in Mexico Policy — officially called the Migration Protection Protocols — has sent roughly 60,000 asylum-seekers to Mexico as they await the outcome of their immigration proceedings in the US. The policy, which first went into place in early 2019, has been a pillar of the Trump administration’s approach to not only restrict asylum access but also deter those seeking protection from coming to the border. In the meantime, immigrant advocates have reported cases of kidnapping, rape, torture, and other violent attacks against those forced to wait in Mexico.

US 9th Circuit Court of Appeals judges William Fletcher and Richard Paez in California ruled to affirm a 2019 preliminary injunction blocking the policy.

“The MPP has had serious adverse consequences for the individual plaintiffs. Plaintiffs presented evidence in the district court that they, as well as others returned to Mexico under the MPP, face targeted discrimination, physical violence, sexual assault, overwhelmed and corrupt law enforcement, lack of food and shelter, and practical obstacles to participation in court proceedings in the United States,” the panel wrote.

The ruling Friday was met with celebration by immigrant advocates and others within the Department of Homeland Security who had long had serious concerns with MPP. Many asylum officers, housed within the US Citizenship and Immigration Services, have criticized the policy as they have been forced to implement it. The union representing the group even wrote an amicus brief imploring the 9th Circuit judges to immediately block the policy, a filing the panel cited in its decision Friday. 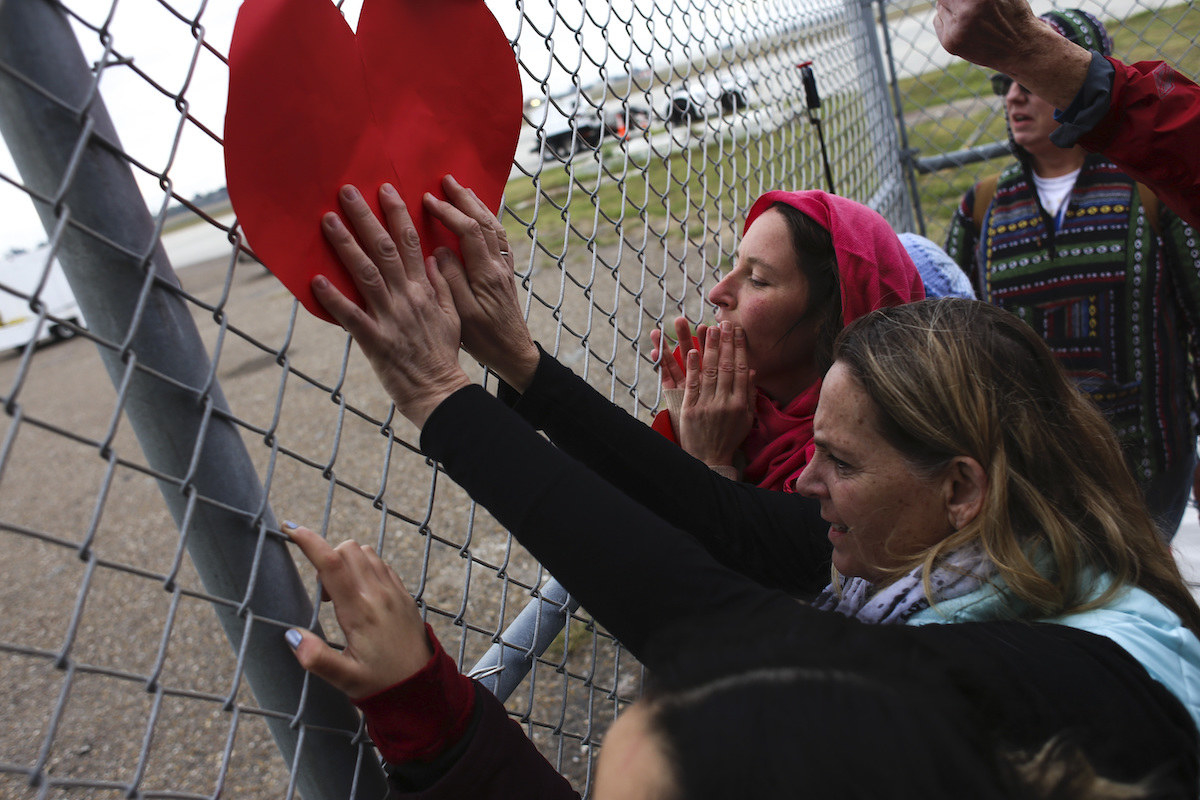 Demonstrators with Witness at the Border hold up paper hearts as buses holding immigrant deportees arrive at the Brownsville-South Padre Island International Airport in Brownsville, Texas.

“This injunction restores some semblance of reason to asylum policy that has become increasingly bizarre and illegal over the last two years,” one asylum officer, who spoke on the condition of anonymity, told BuzzFeed News.

Another officer added: “This program has been an absolute disgrace. When applicants return for MPP screenings after already waiting in Mexico for months, they have almost all been personally harmed, many by Mexican police.” 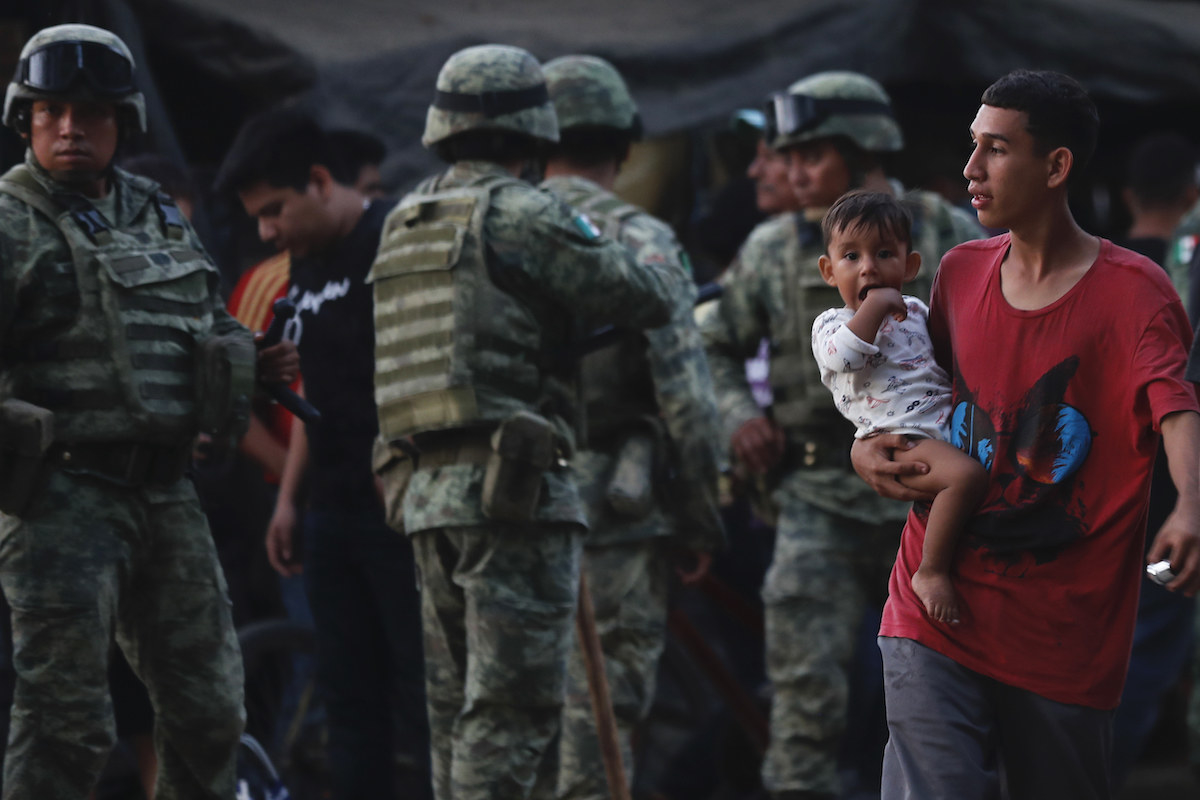 With members of the Mexican National Guard behind them, a man carries a child on the Mexican shore of the Suchiate River on the border with Guatemala, Jan. 20, 2020.

The decision to implement the Migration Protection Protocols in early 2019 came amid a surge of families crossing the border and claiming asylum. In the early days of the policy, the administration was seeing upwards of 100,000 border crossers a month. In recent months, those numbers have dropped precipitously.

“Regardless of your position on MPP, if you measure success in resulting in a number of apprehensions at the southern border, then it has been a resounding success,” said one former DHS official. “The question now will be in an election year what steps are they going to take in response to this injunction? Because in this election year, I don’t think they can afford for the numbers to go back to late 2018 or 2019 levels.”

Late last year, BuzzFeed News obtained a draft report from a team of senior Department of Homeland Security officials who examined the policy and found that US border officials apparently pressured USCIS officials to deny immigrants entry into the US.

The “Red Team” recommendations call on agencies within DHS, including Customs and Border Protection, to provide immigration court hearing notices in multiple languages, improve language access for immigrants, and ensure that they understand the “questions asked and can make informed decisions.” They also recommended that procedures for screening vulnerable populations like children and people with disabilities are standardized and that the role of CBP officers in the process is clarified.

“Glad to see this long-awaited ruling, which vindicates concerns that asylum officers have raised since this program was initially implemented over a year ago,” said an asylum officer, who also spoke on the condition of anonymity.

It’s unclear what happens to those already scheduled for immigration court hearings. The Department of Justice and Homeland Security did not respond to requests for comment.

In its lawsuit, the ACLU claimed that the statute could not be used against asylum-seekers and that it violates legal protections that prohibit the removal of individuals to a country where they would face persecution.

In the meantime, the Trump administration will likely continue to rely on other policies at the border, including two that fast-track deportations for Mexican and Central American asylum-seekers.

The decision from the appellate panel comes nearly a year after a separate 9th Circuit panel instituted a temporary stay of the injunction, which had been issued by Judge Richard Seeborg. In the months since the stay, the administration grew the program exponentially as an attempt to persuade those seeking protection from Central America and elsewhere to avoid coming to the southern border.

In September, US Customs and Border Protection acting commissioner Mark Morgan told reporters that one of the most significant thing MPP was doing is “telling the cartels and this vulnerable population the game has changed.”

“If you come here, even with a kid — it used to be, you come here with a kid, that was your passport into the United States,” he said. “MPP is saying, ‘That’s done. That’s a lie now.’ So don’t mortgage your home. Don’t pay the cartels. Don’t risk your life. Don’t risk the life of your family.”

The decision Friday will likely be appealed by the Trump administration, which could go also to the US Supreme Court to request a stay of the order.

“It’s been a long time coming,” an immigration court official told BuzzFeed News. “There are still a lot of legal questions that have been avoided, but I’m glad that the 9th finally stopped the program.”

Why the Murder of Notorious B.I.G. Remains a Mystery for the Ages

The Challenge's Trishelle, Beth and More Returning for 'All Stars': Teaser

This Ruched Tank Top Flatters Your Waist Without Squeezing It

The Masked Singer: Robin ‘confirmed’ as Aston Merrygold after Joel Dommett’s slip up?