For the 31 years that disability support worker Faye Frazer has helped to look after Guy, Carl, Jonathan and John, she has lived by the same motto.

"When I first moved here, I thought, 'I'm going to treat these boys how I would expect my kids to be treated if they were in the same situation.' And I worked on that the whole time," she says. 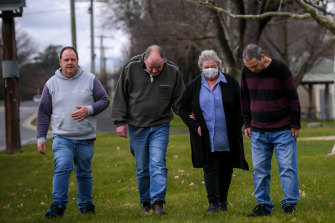 Faye Frazer has cared for the same group of autistic men for the past 31 years.Credit:Eddie Jim

Ms Frazer has been a constant in the lives of the four autistic men from Mansfield, who were in their late teens when she met them.

The men are now aged in their late 40s and early 50s, and Ms Frazer is retiring after three decades in a job she has loved.

"We have sort of grown together. Every time they learnt something new, being able to shave themselves or just a new skill they have been able to do, you are just so proud of them. You have to tell everyone," she says.

The 67-year-old says it has "been like a little family".

"The four boys know all our friends, our family, and we have taken them to family functions," she says. "I always call them my boys because I’ve worked with them for so long." 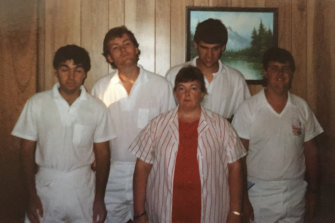 Ms Frazer with Carl, Jonathan, Guy and John on their way to the Special Olympics in Wodonga.

Ms Frazer was aged 35 in 1988 when she moved with her husband from Melbourne to Mansfield for a change of scenery.

She went to the offices of Mansfield Autism Statewide Service, which started 50 years ago to support families living with autism, and met founder Joan Curtis. After a week's trial she was offered a job.

About the same time, four young men – one of them Ms Curtis' son – were moving into a share house. Ms Frazer and her family moved in with them. She has continued to provide live-in support to the men on a rotational basis throughout her career.

Having the same carers for such a long time has been important.

"Autistic people are really not very good with change and the continuity is a real bonus," says Ms Frazer. "We have had continuous staff that have been there for a long time. That, I’m sure, has helped."

The men have a daily work program that includes lawn mowing and car washing, and do activities such as art classes before exhibiting their work in town.

"When I came to Mansfield, it was a smaller town than it is now, and everyone knew them and in a way they looked out for them as well," says Ms Frazer.

"It was really nice. The community have been very good to the boys." 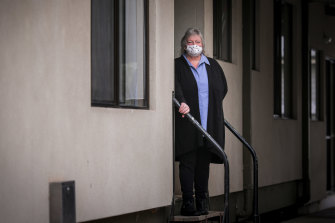 Ms Frazer plans to spend more time with her husband in retirement.Credit:Eddie Jim

The men are all accomplished skiers and love bushwalking, camping and riding their bikes along the rail trail.

After a rewarding three decades, Ms Frazer says it's time to retire.

"As much as I am so fond of those boys and they are an extension of my family, I couldn’t keep up with things," she says. "It was time to move on and spend time with my husband."

She will, of course, stay in touch, visiting the men in town every six weeks for morning tea.

She highly recommends such a career.

"I've enjoyed every minute of it," she says. "There is such a shortage of disability workers, and it’s a job that we do need people to do.

"Without the disability workers, they aren’t able to run a lot of things that would help the clients. The quality of life is no less than they all deserve, and they are entitled to have that quality of life."

Get our Morning & Evening Edition newsletters

The most important news, analysis and insights delivered to your inbox at the start and end of each day. Sign up here.

Birds Of Prey Nearing $200 Million Globally, Which Is More Than Double Its Budget