We’ve quit our jobs for pet-eternity! How could they abandon the cuddly friends they adopted in lockdown when the office asked them back? For these ladies, the solution was purrfectly simple

When lockdown forced the nation to work from home, many of us craved the kind of companionship that comes with four furry paws.

According to one survey, a staggering 3.2 million households have acquired a pet since last March. But as freedom day loomed, pet psychologists warned around 80 per cent of dogs would experience separation anxiety when their owners returned to work. As a result, many owners have rethought their lives. SAMANTHA BRICK spoke to four women who acquired a pet during lockdown and have made the dramatic decision to walk away from their careers…

I prefer puppy talk to those dull Zoom meetings 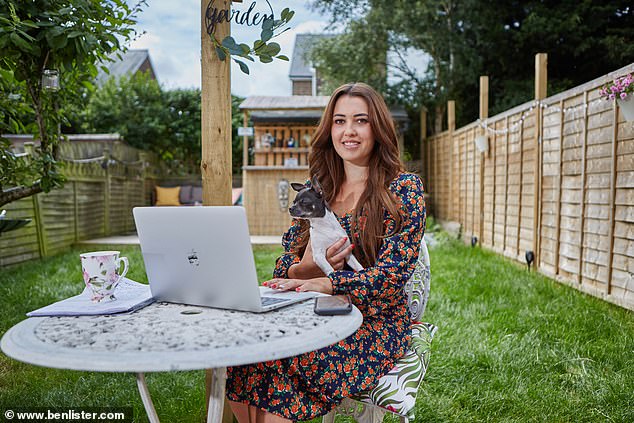 In January, I came across an advert for a litter from a reputable breeder. I had a virtual viewing and, even with a £1,500 price tag, I fell in love

It’s hard to believe that nowadays my coffee break centres on a 3lb bundle of excitement spinning around until she gets a treat. But that’s life with Minnie!

During the first lockdown last spring, my company asked us to work from home. I moved out of London in the May and I’d promised myself that when I did, I would get another chihuahua.

In January, I came across an advert for a litter from a reputable breeder. I had a virtual viewing and, even with a £1,500 price tag, I fell in love. Minnie was a week old, white with grey patches. Weighing less than a kilo, she’d easily fit in the palm of my hand.

She arrived in March, and I took two weeks off work as ‘maternity leave’. It was just as well because the first few nights were horrendous — she cried every two hours.

When I began working from home again, it was difficult, Minnie constantly wanted to play, running across the keyboard of my laptop. During virtual meetings, Minnie, who is rather vocal, would make funny noises.

On more than one occasion I found myself apologising to my bosses. Minnie just wasn’t up for occupying herself — after all, she’s a puppy, and she cried if I went out and left her on her own.

A month after Minnie arrived, I was informed we were returning to the office three days a week. I realised I just couldn’t leave my puppy home alone while I commuted to London.

I talked it through with my mum, who was very supportive. Yes, I’d spent two-and-a-half years in a glamorous role on photoshoots with TV personalities and actresses, but Minnie won the day.

So in April I handed in my notice and went freelance. Hand on heart, I wouldn’t have done that if I hadn’t got Minnie.

Mum has her once a week so that I can get on with work. Minnie is very attached to me but she’s so loving, she makes me laugh every day. I’m glad I did it. 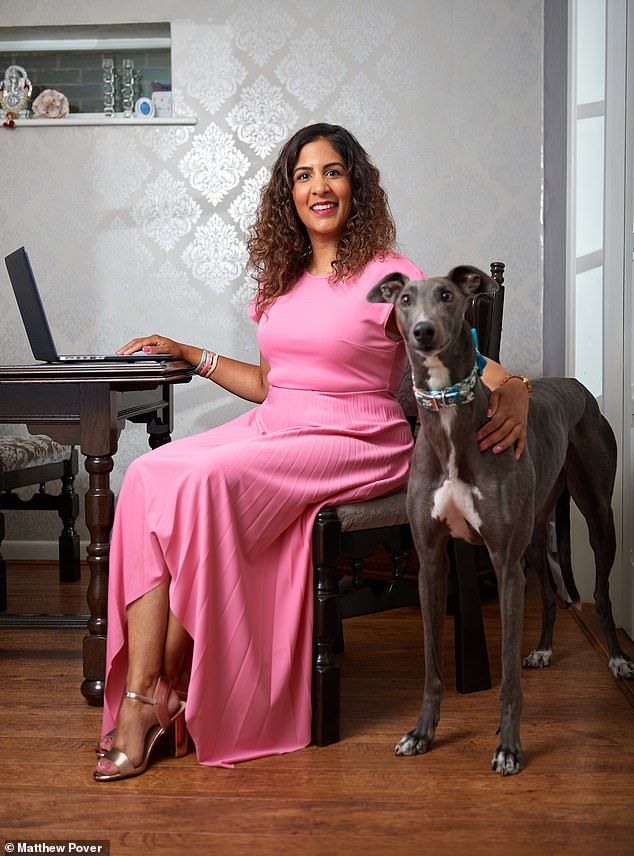 I found out about Theo, a former racing dog, in April 2020 just after the first lockdown when I saw a plea for an emergency foster carer

For Theo, I left my job, a flat I adored in a city I loved and a life of independence, to move back in with my family. But every morning he comes up to my bed for a snuggle and when he lets out a contented sigh, I know it’s all been worth it.

How to describe Theo? He’s a beautiful blue greyhound with white paws and a white tip on his tail. Almost a metre in length, he’s nearly seven years old, is going grey around the muzzle, yet he has the most expressive hazel eyes.

I found out about Theo, a former racing dog, in April 2020 just after the first lockdown when I saw a plea for an emergency foster carer. I had never fostered a dog before but I’d always wanted to try.

At the time I was living alone and working part-time as a vet receptionist, so I felt I was in a good position to help him.

On arrival he was so anxious, he piddled all over my shoes in the hallway. He was terrified, riddled with worms and malnourished. Theo got anxious if he was left alone, so I asked a neighbour to work from my flat when I had to go out to work.

We would walk at 5am when there was hardly anyone around because Theo couldn’t cope with busy environments. He’d been in kennels for all his life and had never been socialised with any other breed of dog.

When restrictions were lifted, life with Theo was quite lonely. We couldn’t meet friends at the park as it was too busy and he was scared of other dogs.

I’ve lived aboard, travelled extensively and yet I found myself restricted to home because it was the only place Theo felt safe. I couldn’t even run errands without relying on someone to sit with him.

The pressures of looking after Theo and juggling part-time work contributed to my decision to quit my job and move back home in Preston.

The final straw came when I was given the ‘choice’ by the rescue charity of either returning him to kennels or adopting him. I couldn’t bear the thought of leaving him in kennels again, so I chose to adopt him.

At the end of July we left London and I was unemployed until the end of the year because Theo was a full-time job.

A year on, Theo has a lovely group of greyhound friends — all rescues. I’ve started a dog walking and puppy training business and work part-time as an animal care assistant, a job I accepted because Theo can come to work with me.

If he could talk, he would say: ‘Home is not a place. Home is the person who rescues you.’

Satisfaction for me is no longer found in my decades-old legal career. Instead it’s with my cocker spaniel puppy Ziggy. We’re kitchen disco dancers — I shimmy my hips while Ziggy excitedly wags his tail.

While I’d temporarily left practice a couple of years ago to write my family memoir, the plan had always been to return to my job as a lawyer and mediator.

While I’d been writing, my cocker spaniel, Pippin, had been my companion. She has the sweetest temperament, and reminds me of Goldie Hawn with her strawberry blonde hair!

As she’s Kennel Club registered, it’s not surprising I was often asked about puppies.

Eventually, we decided to go for it. Pippin had a litter of six in September 2020. Instead of going back to work, having delivered my manuscript, I found myself caring for her and the pups.

When he was five weeks old, I decided I couldn’t live without him. Luckily, my husband agreed we could keep him.

Ziggy’s default mode is happy. He adores people and other dogs. He’s also rather intuitive, I recently had a cataract op and he has continually checked on me. Whenever he’s asleep next to me, there is always a paw touching me.

I’d planned to return to work in January 2021. But in December, when Ziggy was three months, I made the decision not to.

Puppies need fun, regular walks and boundaries. Family lawyers work hard and it wasn’t uncommon to start seeing clients at 8am and keep going for nine hours. I couldn’t do it to Ziggy.

My husband has a very busy therapy practice and needs to put his clients first, so it wasn’t possible for him to give a puppy the attention he needed.

Yes, giving up my salary would have a significant impact, but having enjoyed writing so much I’ve decided to make it my career. It’s the perfect combination — in between stints at my computer I can play and take Ziggy out for walks. 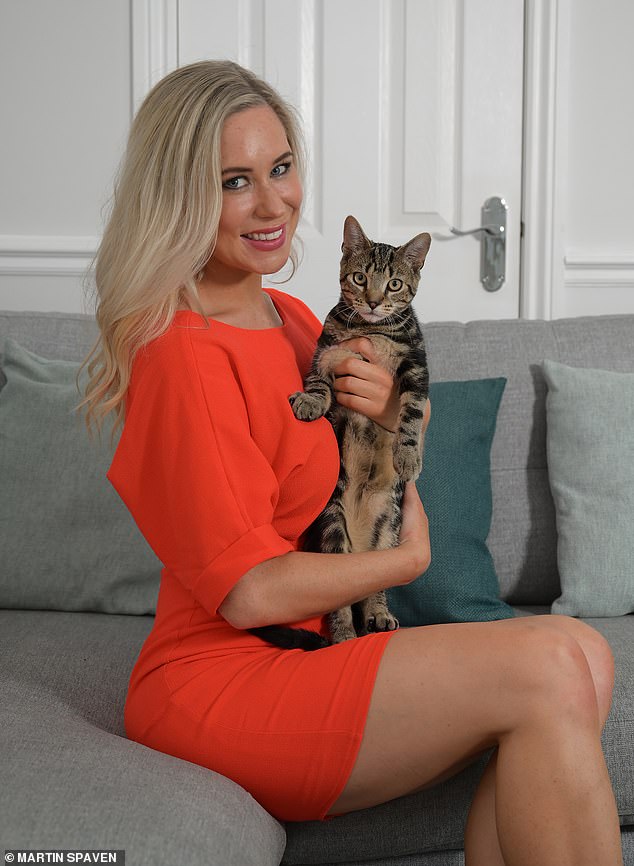 Gizmo came to live with us in March this year, and while he was very lovable, he was full of energy, wanting to climb, chase and scratch everything

my job was managing large-scale digital projects. I commuted to London, leaving at 7am and not returning until late, so it was out of the question to have a pet.

But when the first lockdown happened, I started working from home for large chunks of time. And when a cat streaked across a colleague’s screen during a virtual meeting last autumn, it melted my heart and I was determined to have one, too.

After some research, I found some tabby kittens for sale nearby. Gizmo was just eight weeks old when I met him and I immediately knew I’d found ‘the one’. His eyes are yellow-green, and he has the classic black tabby stripes, grey body and paws. He was worth every penny of the £400 my partner paid for him.

Gizmo came to live with us in March this year, and while he was very lovable, he was full of energy, wanting to climb, chase and scratch everything.

But once he’d calmed down, he liked to snooze on my lap while I worked and made regular cat-cameos on conference calls.

I slowly evolved into a proper cat mum who worried about leaving him alone even for a few hours. And that’s why I handed in my notice in May, two months after Gizmo arrived.

As other people started to drift back to the office as lockdown restrictions eased, I knew I couldn’t leave him to spend long days in an office. We’d formed a bond and it forced me to think about my options in life.

So I left my secure job in favour of staying at home with Gizmo, and am now building up what had previously been a side interest — running a digital marketing business for the tech industry.

While I don’t have the luxury of a guaranteed salary, I’m determined to gradually build my earnings back to where they were before. People thought I was a mad leaving a secure career in the middle of a pandemic but I worried that if I didn’t, I’d regret it. And getting Gizmo was the catalyst for this decision.

In fact, he’s changed my whole life. I’m making changes to my home to keep Gizmo safe in the house and garden, and I schedule in short work breaks to spend time with him during the day.

My partner works long hours away, so it’s often just the two of us at home. Having Gizmo has made me reassess my priorities. He is my fur baby, and as I don’t have children, he is just as important to me as a child.

NHS doctor explains why gloves won't protect you from coronavirus

Reese Witherspoon Fans Can't Get Over How Much Her Daughter Looks Like Her; 'Twins!'

Pub rules: How will pubs reopen after lockdown?