Ah, travel. It’s so aspirational. So enchanting. So desirable. I have devoted my life to exploring the world, but in doing so I must point out that sometimes, travelling is anything but enjoyable. In fact, it can sometimes be a hell even Dante couldn’t conjure.

Let’s start with the actual travel part, shall we? There is a great saying that it’s not the destination but the journey that matters. And to that I say, like hell it is! 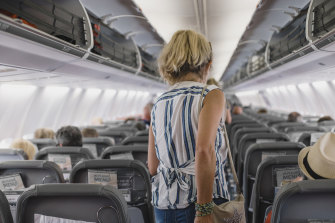 I have devoted my life to exploring the world, but in doing so I must point out that sometimes, travelling is anything but enjoyable.Credit:iStock

Even if I were trapped in a world with Coldplay on constant repeat, I can’t imagine a punishment like some of the flights I have taken – mostly in the middle seat of the middle row on long-haul economy.

But worse is when that row is the very last on the plane, sharing a wall with a bank of toilets where you can not only hear whether it’s a one or a two being evacuated, it’s followed by a crescendo of noisy flushing and a deodoriser mist so noxious it would make napalm smell like cologne in comparison.

To avoid the banging of the dunny doors on one trip, I took so many sleeping tablets that I woke up with my head resting on the shoulder of the man seated beside me, a trail of drool running down his arm. Yet even this is nothing compared to the too many trips where, sick with Delhi/Bali/whatever belly, I’ve ended up as a self-imposed prisoner in the toilets for so long I’ve asked the flight attendants if a seatbelt could be installed.

Then there was the time, on a flight in South America, the pilot pointed out we were passing over the Andean glacier where, in 1972, a plane went down forcing the 28 survivors to resort to cannibalism. Problem was, minutes after the announcement, the interior lights suddenly shorted and the oxygen masks unfurled. Mine landed on my lap, completely untethered, while the cabin crew screamed and scurried around in the dark like headless chooks.

If getting there isn’t fun enough, there’s the hell of navigating a new destination upon arrival. Apart
from getting on the wrong ferry or train (it happens, okay!), there’s the Survivor-worthy test of driving on the other side of the road while trying to navigate using a map in another language. Double that frustration should a man be reading said map. (One dear ex of mine turned out to be working off a map from a city we had left days ago!)

Then there’s accommodation. At one hotel in Tonga, I went to make a cuppa and the teabag literally ran away, propelled by the critters inhabiting it. And the hotel room in Madrid which had something living in the toilet that I’m sure inspired Ridley Scott’s Alien. Oh, and let’s not forget the crabs contracted from a bed in Florida, which required medication and an awkward explanation to my partner.

And while there can be joy in trying delicacies from different cuisines, that isn’t always true. On a press trip to Peru, I felt obliged to try the special dish cooked in our honour: guinea pig congealed in its own fat. As I was the only one polite enough to do so, I was given seconds and thirds. In France I’ve tucked in to a delicious steak in red wine, only to discover I’d just eaten horse. And in Thailand, on a dare from my brother, I not only ate fried spiders but followed them up with crackling
cockroaches.

No, alcohol was not involved in this last instance, but it certainly was when I won free jugs of margaritas for all after eating bulls’ balls (yes, testicles!) in a New York bar (I believe my name is still on its “legends” wall). I also blame booze for enticing me to down tequila-and-oyster shots in Mexico. Sadly the oysters were off, which is why they were in glasses and not on plates. I lost five kilos in the four days I survived until an ambulance was called (doctors told me I could have died).

But you know what? I’d go through it all again. Because it’s the stuff that goes wrong that creates the memories we cherish as much as what goes right. See you in the middle row!

This article appears in Sunday Life magazine within the Sun-Herald and the Sunday Age on sale March 1.

Doctors are now decorating their Christmas trees with PPE

After a lemur was stolen from the San Francisco Zoo, a 5-year-old boy helped zookeepers track it down

What planets can I see tonight? Jupiter and Saturn are in conjunction

PJ Harvey Drops Raw 'Down By the Water' Demo