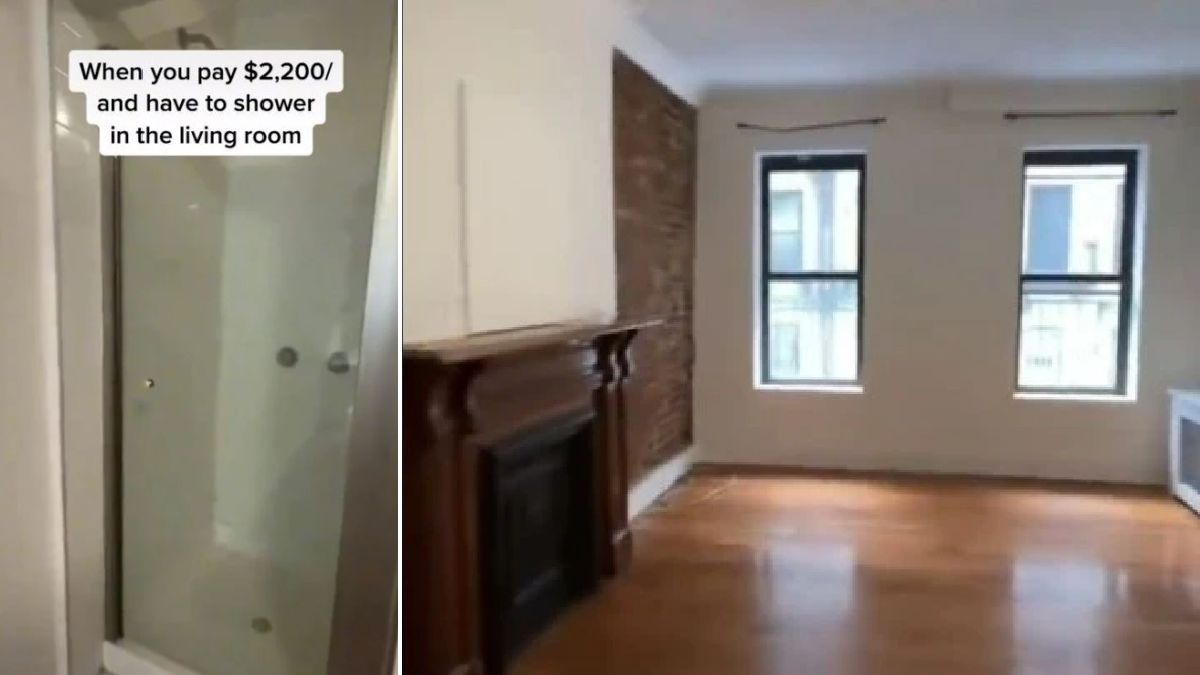 Here in the UK we’re used to overinflated rental prices, with London in particular being the epicentre of the property madness.

Across the pond the issue is much the same. If you’re renting in hotspots like New York and San Francisco’s Bay Area, you’ll be spending a pretty penny on a roof over your head.

One illustration of the kind of living conditions you can expect for your hard earned cash is this apartment in the Big Apple that costs £1,625 ($2,200) a month.

Real estate agent Claudia Degteva gave us a sneak peek of the peculiar flat on TikTok recently, captioning the video: ‘When you pay $2,200/ and have to shower in the living room.’

Sure enough, as Claudia pans around the interior of the space, you can spot a clear glass walk-in shower in the main living area – not exactly what you’d expect beside a sofa and fireplace, especially at this high monthly rent.

Would you? #nycrealestate #foryou #americandream

The small home is an anomaly all round. The kitchen is a good size with an oven, a refrigerator, and a sink (a rare find in New York). It actually has a bathroom too, but it’s only big enough for a lonely toilet.

Why did designers of this property chose to plonk the shower in the living room? And why they didn’t frost the door to at least preserve some of their tenant’s modesty? These are questions we’ll probably never get the answer to.

Claudia’s virtual tour of the flat has now been viewed over 1.4 million times on TikTok, and commenters appear to be as baffled as we all are.

One read: ‘New York can’t keep getting away with these god-awful apartment layouts. Were the architects drunk,’ while another person added, ‘I really don’t get how so many NYC apartments have ridiculous layouts like this.’

‘Were the architects drunk?’ asked another.

It’s difficult to comprehend the reasoning behind this odd layout and lack of privacy, but at the end of it all, it’s essentially about money. Developers converting old, large buildings into multiple apartments don’t want to spend extra on layout changes and eat into profits.

Rather than having to pay for costly construction, they can use awkward workarounds like this and still charge thousands a month. They aren’t the ones who’ll need to wash in front of guests, after all.

Our advice? Don’t (if you can avoid it) pay over the odds for somewhere you can’t comfortably live.

Find somewhere that has functioning amenities fit for human habitation: a small stipulation that property developers appear to have missed with this place.

Kurt Russell Thinks Celebrities 'Should Step Away' from Being Vocally Political: 'We Are Court Jesters'

'Between the World and Me' Adds Mahershala Ali, Angela Davis, Tip 'TI' Harris to Cast

‘It was coach’s call’: Swifts to revert to co-captaincy system