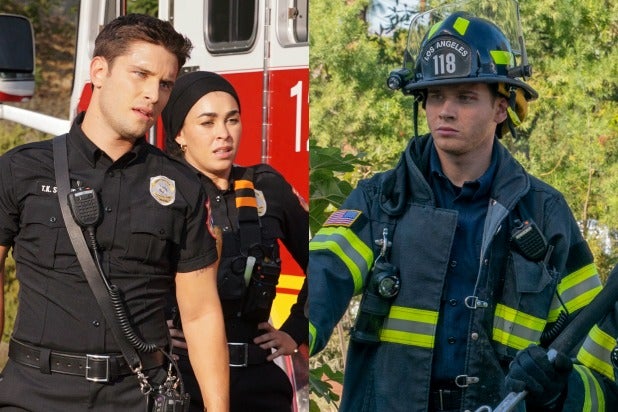 Just ahead of the “9-1-1” and “9-1-1: Lone Star” season premieres, Fox has set the air date for the long-awaited crossover of the Ryan Murphy-produced first-responder drama and its spinoff series, TheWrap has learned exclusively.

The event will take place Monday, Feb. 1, starting with “9-1-1” at 8 p.m. and continuing into the Rob Lowe-led “Lone Star” at 9, with that second hour containing the bulk of the crossover story.

In the episodes, which are set as the series’ third installments of their respective seasons, “9-1-1” characters Henrietta “Hen” Wilson (Aisha Hinds), Evan “Buck” Buckley (Oliver Stark) and Eddie Diaz (Ryan Guzman) will be traveling from their Los Angeles-based Station 118 to help out the members of “Lone Star’s” Station 126 in Austin, Texas as they fight a massive wildfire, according to Fox. You can expect to see the “9-1-1” staples paired off with “Lone Star” fan favorites during the crossover.

“9-1-1” and “9-1-1: Lone Star” co-creator and showrunner Tim Minear first teased the crossover in November by tweeting a photo of Buck and Eddie alongside “Lone Star’s” T.K. Strand (Ronen Rubinstein) and Marjan Marwani (Natacha Karam) asking, “I wonder what that’s about?”

Of course he didn’t give more information that that, and fans have been left waiting to find out exactly when and how the “9-1-1” and “Lone Star” characters would come in contact in the shows’ upcoming fourth and second seasons, respectively.

Oprah With Meghan and Harry: 9 Major Bombshells From the Tell-All Interview

Julianne Hough Picks Up Coffee with Her Mom During Christmas Weekend