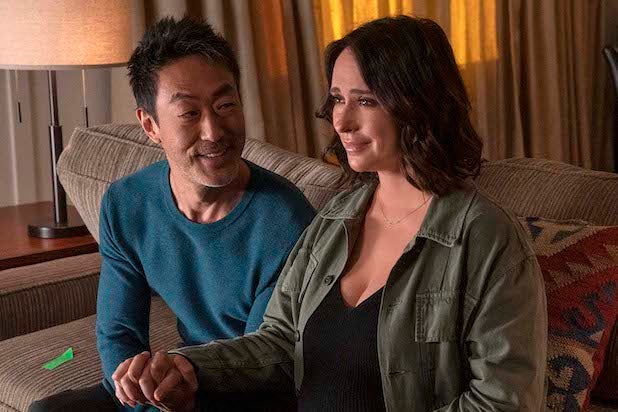 (Warning: This post contains spoilers for Monday’s episode of “9-1-1.”)

The fact that Chimney (Kenneth Choi) almost explodes while out in the field on this week’s episode of “9-1-1” is nothing compared to what the poor guy deals with in his personal life during the episode. The hour sees Chimney meet the parents of his pregnant girlfriend, Maddie (Jennifer Love Hewitt), and her brother and his good friend Buck (Oliver Stark), an already stressful situation made even more stressful because Maddie has let him in on a family secret that is kept from Buck until the end of the episode: Maddie and Buck had an older brother, David, who died.

“I think everybody has been in a position where you have to choose between your friends and your partner in life, and that’s happening here. And it’s a lot of stress for Chimney. It’s a huge struggle because, apparently, everyone knows that Chimney is just a blabbermouth,” Choi told TheWrap. “He’s the one person you can count on. I think we all have a friend like this as well, you know, that if you want a secret to get out, just tell this one person, don’t tell anybody else, and for sure this person will tell everybody. So him coming to terms with trying to keep a promise to the love of his life in holding this deep, dark secret from one of his friends and colleagues, it is stressful, to say the least. Which mirrors the kind of situation he encounters with the bomber. He’s about ready to explode, as Chimney is about ready to explode.”

Right, so about that whole exploding thing — we weren’t kidding: Chimney encounters a bomber while the 118 is out on a mission, and he talks him down from pressing the button that will blow them both up by telling him the secret he’s not allowed to tell anyone else. Chimney’s ability to remain so calm during the bit — which cuts around the big reveal, so as to keep fans guessing along with Buck until the end of the episode — is a twofold feat, according to Choi.

“One is that he’s finally getting to get this off his chest. He’s finally able to release this secret he’s been holding onto throughout the entire episode. But part of it is also calculated,” Choi said. “He knows he has to make a move — he has to make a move soon — and this is his way to get the bomber comfortable. To give him a false sense of security so he can make his move. But it’s binary, he gets to relieve all of this pressure as well, at the same time.”

Now that Maddie has told Buck the secret that their parents Phillip and Margaret, played by Gregory Harrison and Dee Wallace, have insisted — for some reason — that she keep from him his entire life, we’re hoping the siblings can sort through the skeletons their parents have put in the family closet and begin to heal. Especially because Maddie and Chimney are starting their own family now, expecting a little girl in the coming months, and we’d really like those two to be happy together and with Buck. But then this is “9-1-1,” and Choi can’t make any promises about what showrunner Tim Minear has in store for the couple, one a first-responder and one an emergency operator.

“I think the great thing about this show is that they give characters a lot of room to struggle, they give them a lot of conflict, which enables a lot of drama, but they also like to give them moments of levity,” Choi said. “They like them to overcome their struggle, overcome that conflict so they can find some peace at the end of that dark tunnel. And then they just throw another obstacle in their way. So having a baby is a huge obstacle for Chimney, because he seems to be a guy who is always super cautious as he goes throughout the world, kind of unsure of himself, unsure of his surroundings. And throwing a baby into the mix, that just turns his world completely upside down. And I’m hoping that, now that he’s made the decision to move back in with Maddie, that he’s going to turn a corner. I don’t have a child, but I know several people who do, all my friends have children.”

Choi added: “And I know it parallels that feeling of absolute fear because of the unknown, and then you sort of get a handle on it in your head and you think that everything will go the way you want it to go. And then once you have the baby, every plan you have goes out the window. So I think Chimney will get a false sense of security, and once the baby is born, I’m sure there is going to be a lot of conflict thrown at him and Maddie as they’re trying to juggle their lives, they’re trying to juggle their jobs. Their jobs are so stressful. And one of the pitfalls with first responders is coming home and trying to leave all that drama at work and not bring it into the family life. So I think it will be interesting to see how they juggle their professional life with the personal lives with this new addition.”

Maddie and Chimney are having their baby amid a pandemic, as many people in real life are, something they never expected seeing as they didn’t originally intend to be expecting. But now that they are, will they be tying the knot some time soon?

“I don’t know. And if I did, I probably couldn’t answer that,” Choi said. “I don’t know. It could go either way. They could throw a bunch of obstacles in their way or make it a feel-good sort of storyline. A wedding is always positive; a wedding is always wonderful and lovely. In the world of ‘9-1-1,’ we like to throw our characters into perilous situations but we also like to come out of it stronger. And I’m hoping that the same happens here.”

Choi says the other big relationship in Chimney’s life, the one he has with his little brother Albert (John Harlan Kim), will be unpacked more this season, too.

“I foresee some events happening to Albert that will force Chimney to explore this new relationship with his brother. I mean, it is still pretty new. Even though it is his brother, it is a new person in his life. So I think the best way you get to explore a relationship is when pressure is applied to it. And I think that Tim is great at exploring characters through applying pressure to them. And I think that’s going to happen between Albert and Chimney.”

'The Brady Bunch': 1 Story Line Was Scratched for Being Too Taboo at the Time

Who Is The Actor In The Mattress Firm Commercial?

'Girlfriends': Why Did the Series End So Suddenly?