The coronavirus outbreak has already wreaked havoc on the global box office, with Asia suffering a $1.91 billion loss in two months, and further impacts rippling across Europe. The U.S. market is next: Within a week, studios canceled every wide release on the schedule for the month of March. The specialty market faces a dicier challenge. While many movies may see the bulk of their business on VOD — especially in the months ahead — proven crowdpleasers have been banking on the word-of-mouth potential of a platform release. “The Climb,” which premiered last year at Cannes, sits at the center of that conundrum.

The boisterous and innovative buddy comedy from director Michael Angelo Covino and co-writer Kyle Marvin was acquired by Sony Pictures Classics after its festival launch, and the company still plans to release it on March 20 in New York and Los Angeles, with additional showtimes already booked in Atlanta and Knoxville, among others. The company’s platform release strategy was designed to hit 200-300 screens across several months.

Covino and Marvin, a rising filmmaking duo whose movie was one of the great festival discoveries of last year, embody the conundrum facing filmmakers poised to lose the most from empty theaters — or, with everything from “A Quiet Place II” to “Mulan” off the screens in March, and James Bond entry “No Time to Die” pushed from April to the fall, they could also have the most to gain.

At least, that was the optimistic spin the pair could muster as they considered the situation in an interview this week. “Some movies have to stay on screens to eat up the ones that 007 won’t be on!” Covino said on Wednesday, and chuckled. The pair, who previously produced festival hits like “Hunter Gatherer” and “Kicks,” have a lively chemistry that has contributed to their rising stature in the industry over the past year. At the same time, their current attempt to soldier on despite mounting uncertainties speaks to the many open questions facing filmmakers and the industry at large in a rapidly changing situation.

Marvin stressed the importance of the theatrical model in what they viewed as success for their first feature. “For the spread and the reach of the film in the immediate future, it’s critical for us,” he said. “We really want a theatrical opening, and feel it’s important that independent comedies do well in theaters. Whether or not that happens, I want to support that possibility.”

As the coronavirus situation picked up steam throughout the week, Covino and Marvin continued their work as usual, traveling through New York for press and a premiere party in downtown Manhattan hosted by the Cinema Society. “The Climb” had been set to play at SXSW until its coronavirus-related cancellation. That would have completed an impeccable festival run that went from Cannes to Toronto and Sundance, where the short film that inspired the movie launched three years ago. The feature is actually the rare title to be accepted to SXSW twice: Covin and Marvin submitted an unfinished version to festivals in late 2018, including around 15 minutes of voiceover explaining events set to take place in scenes that had yet to be shot.

While Sundance passed on that round, SXSW Film Producer Janet Pierson actually invited the movie, on the basis of compelling earlier scenes. “Janet said, ‘That’s the most innovative way to keep us engaged with the movie,’” Covino beamed. “Smartly, our financiers decided to have faith in the film and said we should finish it, and premiere wherever we can.”

That paid off when “The Climb” found its way to the Un Certain Regard section at Cannes, and became one of the few standout American movies at the festival last May. But it also represented a risk, as few U.S. movies sell out of the festival, hence Covino and Marvin’s original desire to make the cut at Sundance, SXSW, and Tribeca last year. “There’s this system in place that can be broken, but it’s not necessarily easy to break,” Covino said. “The system says distribution companies have X amount of dollars in January, and they go to Sundance, and they spend some of those dollars. There aren’t many marketplaces for selling films like this.”

“The Climb” is the kind of festival breakout poised to please several contingencies at once. Unfolding across several years, the movie follows characters played by Covino and Marvin as their friendship collapses when one man sleeps with the other’s fiancé. Lives fall apart and come back together over the course of the running time and hilarious hijinks ensue, but so do dazzling long takes and surreal musical interludes. There’s also a whole lot of biking — bikes as metaphors, bikes as escape devices — and the real-life cycling enthusiasts even rode onto the blue carpet at the Independent Spirit Awards in January, when the movie was nominated for Best First Screenplay.

And the hype is justified: “The Climb” delivers both as a refreshing cinematic gamble and a genuine comedic achievement. “We’re trying to make things that people will enjoy,” Covino said. “The general audience that isn’t a cinephile can hopefully still enjoy this film and realize there’s something different about it.”

While coronavirus developments have yielded a rising interest in the potential of the streaming market, Covino and Marvin stood by their decision to press for a traditional theatrical release, and recalled passing on overtures from Amazon and Netflix after the movie premiered at Cannes. “For us, the best place to watch a comedy is in a theater with a bunch of people,” Covino said. “That’s something that doesn’t get talked about when people discuss Netflix.”

In conversation together, Covino and Marvin often finish each other’s thoughts, oscillating between playful observations and the practical know-how of their producing background. That balance became especially clear as they dug deeper into disconnect between streaming and theatrical opportunities. “Netflix is buying up almost all the comedy,” Marvin said. “They’re coveting the best creators that exist, and they’re saying, let’s go straight to the platform because people like to sit in their beds at home to watch something while folding their laundry while laughing. That’s great, too. But laughter is contagious. And…” He paused, thought for a moment, then went for it: “And so is coronavirus.”

Covino cackled. “That’s our tagline!” he shouted. “Oh my god… You know, I just remember a different landscape of comedy growing up that excited me about making movies in the first place. That landscape keeps changing. I don’t think we should be reliant on a movie like ‘Central Intelligence’ — these big, formulaic studio comedies — to be the only thing we say can go out to see in theaters. There are smart, elevated comedies that are character-driven. If they can find a place that’s good for cinema.”

He turned back to the streaming conundrum. “We have to look at how to preserve the theatrical window in general,” he said. “If every great filmmaker said, ‘I will not work with Netflix unless you preserve a theatrical window,’ what would Netflix do? They wouldn’t have the Cuarons and Scorseses to work with. It’d be ‘Stranger Things’ and Adam Sandler movies. That’s not to say their subscriber base wouldn’t make a dent. It’s just about whether we value it or not as a community of filmmakers.”

Marvin piped in. “Netflix is symbolic here,” he said. Covino shot back: “Well, it’s just Amazon and Netflix, pretty much,” he said, noting Apple’s theatrical partnerships with A24, and the impact of Hulu money on sales like the reported $17.5 million spent on “Palm Springs” at Sundance, which was initially attributed to theatrical distributor NEON. “That’s the way it feels like it should function,” Covino said. “The streamers should be fighting over the rights for where these movies finally end up, what SVOD platform they finally land on. They can underwrite the entire thing. That can prop the whole industry up.” 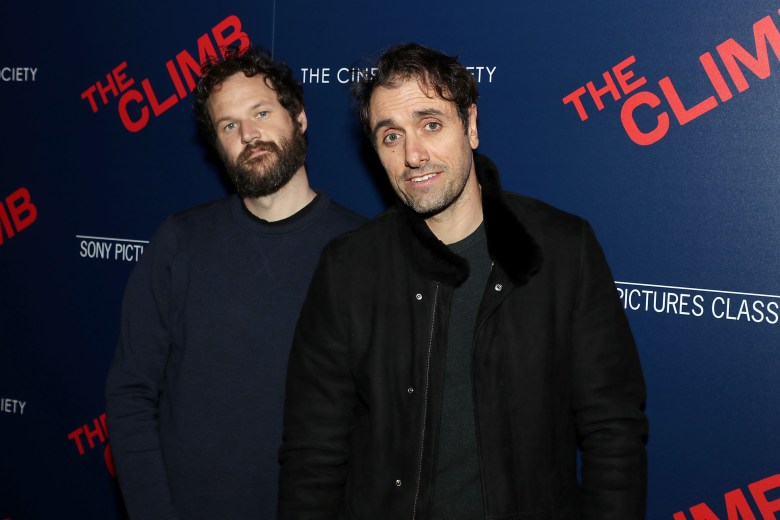 Kyle Marvin and Michael Angelo Covino at a special New York screening for “The Climb” this week.

Despite their convictions about the market, they were less reticent to explore the options that Hollywood could provide them. Covino recently co-starred opposite no less than Tom Hanks in Paul Greengrass’ upcoming western “News of the World,” and they had a secretive new writing gig they planned to start working on in the weeks ahead. “ I think we can smuggle our sensibilities in, because I always have the ejector button ready to go,” Covino said. “The beautiful thing about the position we’re in is that we’re not precious.”

However, they were still counting on the future. Two days later, they milled about their premiere party at the upstairs bar of the IPIC Theater on Fulton Street, receiving various well-wishers with a mixture of tentative handshakes, elbows, and nods, while Sony Pictures Classics co-presidents Michael Barker and Tom Bernard worked the room. (Ironically, the theater was once a dumping ground for Netflix’s day-and-date release strategy before it took over other theaters.) Covino and Marvin hovered by the bar, talking to Cinema Society members who said they enjoyed the movie, while looking ahead to a busy schedule.

Covino splits his time between New York and Los Angles; Marvin lives in L.A. with his family. They still planned to head to Los Angeles on Saturday, despite multiple promotional screenings at USC, the WGA, and the Academy being canceled, and hoped to squeeze in some writing sessions. While musing on their unusual situation, a nearby partygoer held up a glass of wine and smiled. “Maybe this is the last movie premiere…ever!” he said. Awkward laughter followed.

Marvin shrugged. “For us,” he said, “it’s important that people wash their hands, take care of themselves, and go out and see movies.”