The fourth episode of season 7 of Brooklyn Nine-Nine ended on a bit of a cliffhanger involving Vanessa Bayer’s character Debbie Fogle. In “The Jimmy Jab Games II,” Debbie stole evidence from the precinct after Charles Boyle helped her discover her confidence. On Feb. 27, “Debbie” picked up where the last episode of Brooklyn Nine-Nine left off and revealed what Bayer’s character was up to.

[Spoiler Alert: This article contains spoilers for the most recent episode of Brooklyn Nine-Nine.] 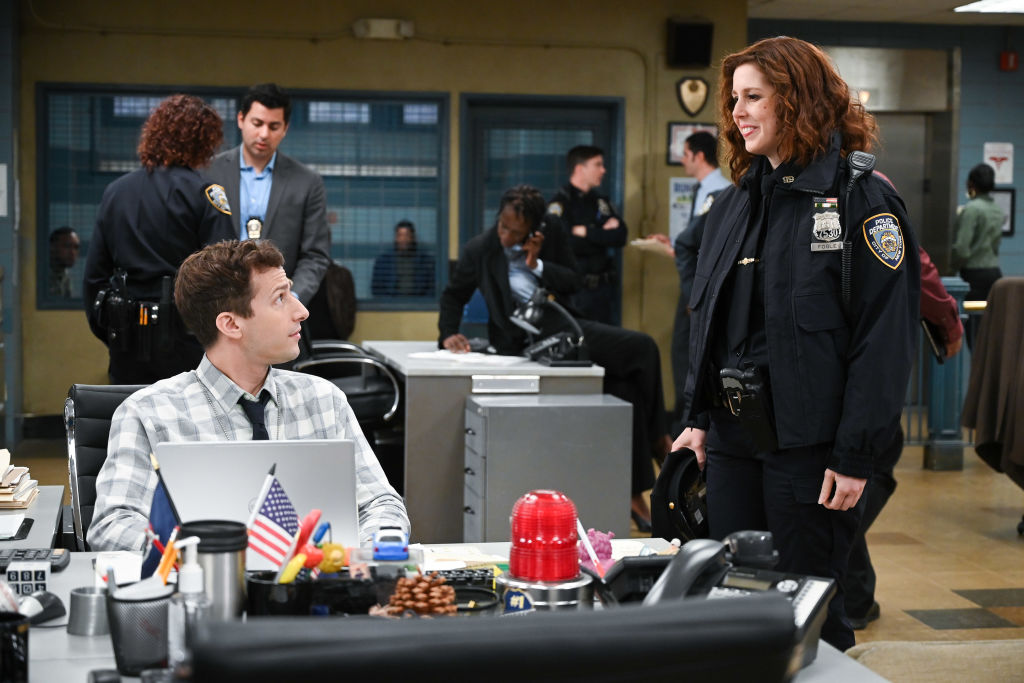 The Brooklyn Nine-Nine episode begins with a stressed out Debbie doing her best to cover up her crime. She tells Jake to kill whoever did it, and then blames someone else in the precinct because he “has a hot tub.”

Holt tells Debbie that it was clearly an inside job and that everyone is a suspect until the investigation is over. Rosa adds that Scully and Hitchcock are not suspects because whoever did it needed to take the stairs. Debbie asks what would happen to whoever did it, and Holt replies that they committed several felonies so they would receive a prison sentence of 30 years to life.

From Studio 8H to the Nine-Nine, these two will always make us laugh. Drop your favorite #Brooklyn99 joke and @nbcsnl character below. ?

The cold open then jumps to Debbie in the bathroom talking to someone on the phone. She assures whoever is on the line that she isn’t a suspect because she is playing it so cool. Because Hitchcock was using the women’s restroom, he overhears everything. He’s proud of himself for figuring it out, but it turns out everyone already knew it was Debbie because of her highly suspicious behavior.

Jake and Rosa clash over how to handle the situation

While everyone knows Debbie stole the cocaine, Jake and Rosa have different opinions on how to deal with Debbie. In questioning, Debbie admits that she took the drugs, but she won’t admit that she is working for crime boss Silvio Nucci like Terry suspects.

Jake wants to find a way to help Debbie, because even though she committed a crime he does not think she’s a bad person. Rosa insists that Debbie is an adult who can make her own decisions. She admits that she ended up in juvenile detention when she was younger, and that she needed the toughness of facing her mistakes with no help.

What's the TV equivalent of the term "a real page turner?" ? #Brooklyn99

Despite Rosa’s story, Jake comes up with an idea to try and convince Debbie to lead them to the stolen cocaine and guns. Jake and Rosa pretend to be working for Nucci too, and break Debbie out of the precinct. The plan seems to be going well, until Debbie decides to do some of the cocaine.

As Debbie keeps doing the cocaine, she becomes even more of a loose cannon. By the end of the episode, she has her mom, Jake, and Rosa tied up in a mansion she rented on Airbnb. Debbie’s mom antagonizes Debbie for her mistakes, and denounces Debbie as her daughter.

Rosa tells Debbie that she knows what it is like to have family look down on her, and she wishes her parents had accepted her past mistakes instead of forcing her to deal with it alone. Her backstory causes Debbie to have a change of heart, and she unties Rosa and Jake.

When Nucci arrives, the Nine-Nine show up as well and arrest him. Rosa tells the D.A. that Debbie cooperated and as a result she will most likely only receive 10 years in prison instead of 30 years.

12 Campervans To Rent In The Spring For The Ultimate Friendcation