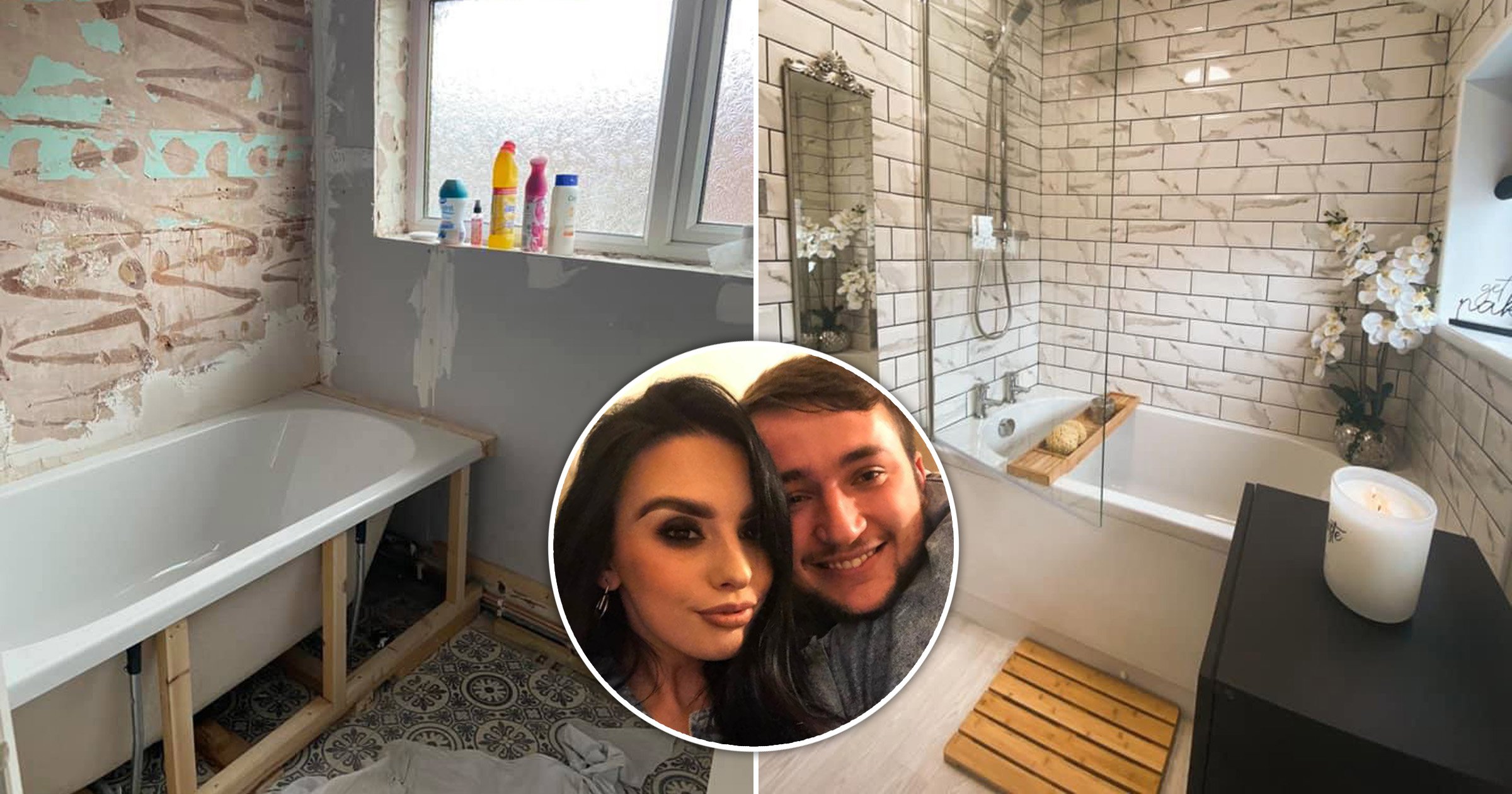 With some smart moves, you can transform your home for very little.

Well, one couple has saved thousands by transforming their outdated bathroom by themselves.

Tyler-Mae Conway, 24, and her boyfriend, George Coomber, 25, moved into their three-bedroom terraced house in Lincolnshire with two-year-old daughter Delilah-Rose in 2020.

Both felt the original bathroom was ‘dull and miserable,’ but after receiving an expensive quote of £5,250 to update it professionally, they took matters into their own capable hands.

In the space of one week, they revamped the old-fashioned bathroom into a modern masterpiece.

Now sleek and stylish, the majority of the work was carried out by Tyler-Mae and George, with some extra help from their friend Kevin, who is a professional.

‘We wanted to transform our old bathroom from how it was when we first moved in because it had carpets and a walk-in shower with cream-coloured cladding,’ said stay-at-home mum Tyler-Mae.

‘It also had built-in brown units, which made it feel smaller than what it was.

‘We both have experience in DIY but not to the extent of plumbing and groundwork, so we got someone [Kevin] in to do that.’

First, the couple ripped out the old bathroom from top to bottom, walls included. Next, they fitted plasterboard, added a new bathtub and basin from B&Q (which cost only £80), and added taps gifted by George’s aunt. Meanwhile, a Victorian radiator that they found on Facebook Marketplace for £80 was installed.

The thrifty pair then went on to source their dream tiles from a local supplier for just £160, and their professional friend Kevin fitted them before adding a new shower.

Finally, a new floor was laid, and the walls were painted to complete the bulk of the initial refurbishment.

‘The linoleum flooring we picked up for £40 from a local carpet shop, and my partner fitted it himself,’ Tyler-Mae explained. ‘He’d never done it before but watched YouTube videos to teach himself how to do it.

‘Once all the main work was done, I got down to decorating, which is where I could get more hands-on. I painted the walls using B&Q’s own brand wall and ceiling paint in the colour Tijuana, which only cost £16 for a 2.5 litre tub. I only used half of it, which means I have more left over for touch-ups too.’

Tyler-Mae kept decorating costs down by focusing attention on supermarkets and hunting online for bargains.

‘I got a mirror from Asda when I was food shopping, and it only cost £8. I also bought my funny ‘nice bum’ lettering from a small business on Etsy,’ she said.

‘I picked up things like bath salt storage and wicker baskets from the British Heart Foundation’s charity shop. Then I upcycled a few things I already had to fit them in the bathroom, like the picture frames, and bought a cheap bath rack and bamboo board from Home Bargains.

‘I also used some leftover wall paint to make the star in the window look a little more rustic, which I feel fits in with the look.’

In total, the remodel cost just £1,854, with plumbing, pipe, radiator, and shower installation included. This saved them a whopping £3,400 from the first quote they obtained and gave them the space of their dreams.

‘We saved so much by buying everything ourselves and are overwhelmed with the finished results,’ Tyler-Mae said. ‘The bathroom was closed in, dull and miserable before, and I have changed it dramatically by putting my own personality into it.

‘It’s now a more open and airy space and is finally somewhere I can relax and take some time out.’

Have you completed an amazing DIY transformation?

'The Hunger Games': Jennifer Lawrence Had No Idea She Was Famous Until She Was Accosted at Whole Foods

Corrie reveals Ray is alive — after Debbie admits to his murder

Does Javi from Teen Mom 2 have a past with this Love After Lockup star?