Death In Paradise viewers saw DI Neville Parker (played by Ralf Little) struggle to settle into island life as it soon became apparent he had a host of minor ailments. Tonight, he was set to leave as he solved his last murder case but he quickly had a change of heart. However, could this mean an exit for another major character after it was hinted JP Hopper (Tobi Bakare) could leave?

Ralf Little’s bumbling detective initially couldn’t get off the island quick enough after being drafted into solving a murder case after the departure of Ardal O’Hanlon’s DI Jack Mooney.

However, after successfully getting to the bottom of the murder mystery, he was told by Commissioner Patterson (Don Warrington) he couldn’t leave just yet.

The Commissioner told him he would have to stay until a replacement was found as he has spent the past few episodes annoying his colleagues with his various allergies.

Tonight, the inspector was due to return home but he had a change of heart after murder suspect Olivia Reeves (Frances Tomelty) issued him some sage advice.

Neville was star-struck to meet Olivia, an actress, as he quickly got to work trying to find out how her husband Robert (Peter De Jersey) was killed. 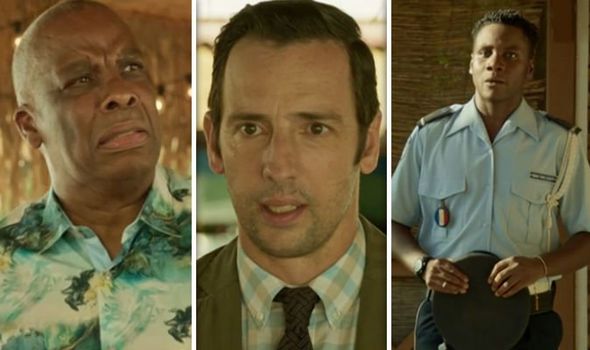 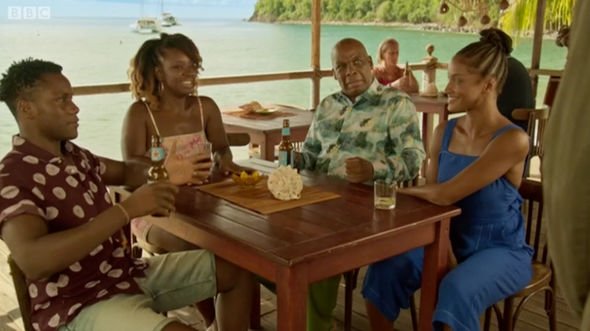 It later came out she was innocent despite being the only suspect spotted on the beach where her husband’s body was discovered.

It was in fact his son Archie (Ukweli Roach) who killed him after Olivia had fired a blank shot by accident as Neville’s future was then addressed.

Neville was set to leave after solving the latest case and had even thrown a leaving party with his colleagues as he looked to be returning home.

Later on, he got talking to Olivia as he expressed his concerns about going home after he quizzed her on why he decided to move to the island after losing her sight. 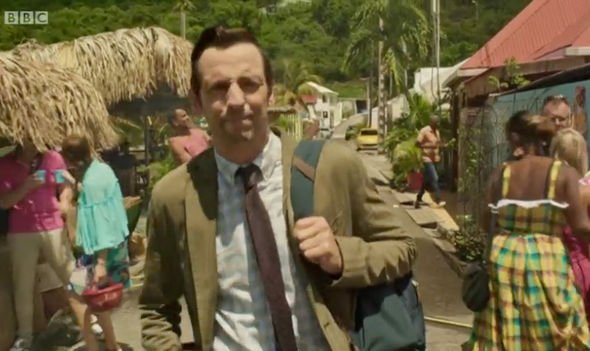 Olivia told him: “Something in me wanted a fresh start and I thought, if I can never see the sun again then I want to feel it, and so I came here.”

He told her: “Going home, it scares me,” as she replied: “I thought it was what you wanted?”

Neville noted: “It was, then I drank rum and danced on a beach,” before Olivia advised him to stay.

“That scares me even more! And there’s my taxi,” he said, before making a shock return later on as he announced his plans to stay put on the island.

However, some fans think there’s a possibility an exit could be on the cards for another fan favourite character after JP finally passed his sergeant exams this evening.

JP had sat his Sergeant exams this evening as Commissioner Patterson later informed him of his result: “Now the case is over I expect you would like to know how you performed in your sergeant’s examination. How do you think you did?”

“I thought it was tough, really tough, so I kind of guess, not that great,” JP replied.

Commissioner Patterson: “Interesting, because since the St Marie police force was founded, you have scored the highest mark of any officer on this island.

“You passed with flying colours, curious to know why you thought you failed, you are an outstanding officer JP, everyone can see that,” he added.

However, some fans now believe an exit could be on the cards for JP after the news, with one saying on Twitter: “Woah JP well done but don’t leave #deathinparadise.”

Another echoed: “I’m suddenly getting vibes that JP is leaving  #DeathInParadise.”

Death in Paradise can be streamed on BBC iPlayer

Bad Bunny Does Not Know Who Won the Super Bowl (Video)