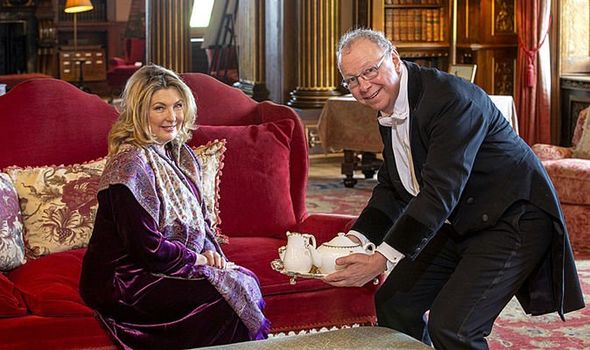 Butterflies perform cartwheels in my ­stomach as I contemplate the day ahead and the tasks I will have to perform as part of a day-long test to see if I can hack it as under butler for the castle’s real-life owners, Lord and Lady Carnarvon.

As role models go, none could be better than Carson, played superbly by Jim Carter in the TV series and film, but he was playing the role of butler. I want to be a real butler. Before I have even touched the knocker, the enormous solid-wood door opens and head butler Luis Coelho appears with a jaunty: “Welcome to the castle.”

“How on earth did you know I was here?” I ask. “Butlers have to know who is visiting and when and be ready at the door with a smile,” he says. Then, laughing mischievously, he adds: “Actually, I looked out of the side ­window and saw you coming.”

Even so, his timing is perfect and it is clear to me I will have to be on my toes to impress Luis who is ready with my first test.

Can I prepare a cocktail for her ladyship with egg white, Highclere Gin, lemon juice, Cointreau and ice?

I look around the grandeur of the main hall, with its ornate stone arches, and a fever sweeps my brow as I envisage the contents of the cocktail shaker exploding over the ­centuries-old paintings and beautifully woven carpets.

“Don’t worry, just bang the glass down on the mixer and it will seal it and then start shaking. But hold it tight – please!” warns Luis, now looking a little shaken and stirred at the efforts of his clumsy pupil. 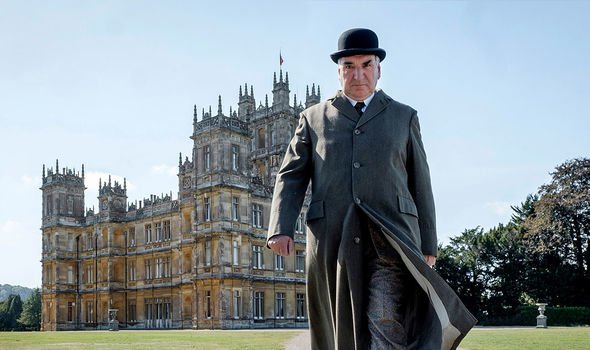 With great care I shake vigorously, but while the egg produced a mouth-watering fluffy foam in his cocktail glass, mine looks more like something a five-year-old uses in a painting class to clean the brushes.

Still it tastes lovely, although I am warned that butlers are never allowed to sample the drinks they prepare. Matters improve when I manage to carry the cocktail on a silver tray without spilling a drop – although the prospect of taking it upstairs, along corridors and across cavernous rooms induces palpitations.

Talking and walking while trying to stop a tiny cocktail glass sliding off a silver tray is not for the faint hearted, but I pass that test. By a whisker.

Luis patiently leads me to the jaw-­dropping dining room, where Lord and Lady Grantham, played by Hugh Bonneville and Elizabeth McGovern, entertain so lavishly in the period drama.

Looking down sternly on proceedings is Charles I, painted by Anthony van Dyck some years before his head was chopped off, alongside family portraits.

“This table was made in 1881 and now we are going to lay it as it would be laid for a dinner,” says Luis presenting me with a ­bundle of Sheffield steel knives, forks and spoons, glasses and napkins. 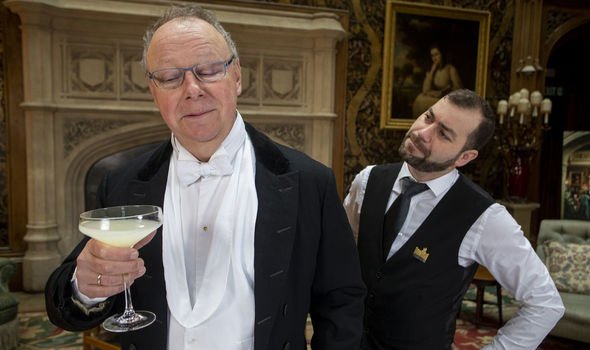 First a protective mat is laid on the table, covered with a rectangular white cloth bearing the family crest, always positioned on the bottom right-hand corner.

As I lay pudding spoons and forks across the top, Luis wags a finger. “All the cutlery is placed at the sides of the plates, nothing at the top,” he says firmly. Once laid I double check everything is perfectly symmetrical and, even if I say so myself, it looks pretty good. Next come the engraved crystal glasses with gold rims. The water glass is aligned directly in front of the main-course knife with the red wine glass in front on the left, the white wine one on the right and the pudding wine at the back. “Wine before water, always, and always hold the bottles of red and the white in your left hand, so, once the guests have chosen, you can pour with your right hand from the right while holding the bottle at the bottom to keep it steady,” says Luis, who wonders if I would like to open a bottle of vintage red wine, probably worth thousands of pounds, on the very table where the 5th Earl of Carnarvon entertained guests with stories of funding Howard Carter’s discovery of the tomb of Tutankhamun.

And just feet from the Van Dyck, worth at least 10 times more than my house.

It has been going so well, so I decline the invitation, imagining what the room would look like doused in vin rouge. 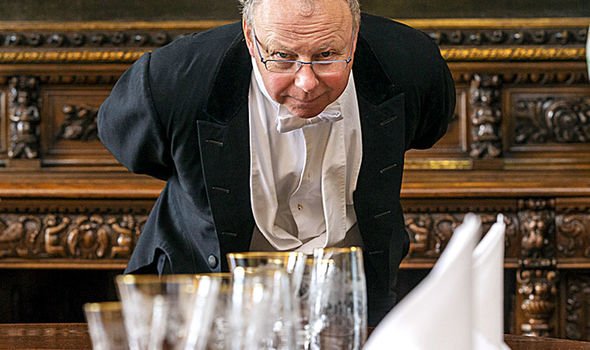 Next task is fashioning a bishop’s hat out of a starched napkin to sit decoratively on a plate. Easy. In a blur of hands, Luis creates the perfect hat. Mine, I’m afraid, looks more like a well‑worn nun’s habit. Food must be served from the left – dirty plates cleared from the right – and drinks always poured from the right. Tablecloths are only used at breakfast and lunch, never for dinner.

When I point out that in Downton there is always a tablecloth for dinners, Lisbon-born Luis, 38, fixes me with a steely glare which would have Carson bursting with pride: “This is Highclere, not Downton,” he snaps. Lord and Lady Carnarvon prefer to sit opposite each other in the middle of the table, not at the ends, and I am to walk ­clockwise to avoid bumping into other staff.

The final test is serving afternoon tea to Lady Carnarvon in the library. I control my nerves to stop the china rattling and successfully land the tea tray in front of her ladyship without any spillage. “Jim is a very good name to come here with,” Lady Carnarvon jokes. Aside from the name, what qualities is she looking for in a 21st century butler? “To be timely, accurate, well prepared and good at planning,” she says. “To have a good sense of humour and be a team leader.

“Here, the butlers don’t do just as Jim Carter was doing, serving the Crawley family. Luis runs quite a sophisticated ­banqueting set-up in summer, helping feed and look after 1,500 people a day. He enjoys the challenges. Unlike the very precise roles which ­everybody had in the time of Downton Abbey, it is very different today. We have our roles and we step outside them.

“I was feeding the horses this morning. We all pitch in.”

She has very fond memories of filming and hopes the sun has not gone down on Downton, which was meant to be set in Yorkshire, not on the border of Hampshire and Berkshire where Highclere Castle, built in 1679, actually is.

“I don’t think Downton is ­necessarily over,” she says. “There’s so many references to it everywhere. In some way I think it has entered the English language which I don’t think has happened for many other series. We’ve been very lucky to be part of the journey. I would be surprised if they don’t do another film.”

Carson is the spitting image of Robert Taylor, who served as butler at Highclere for 50 years until ­retiring in 1987. “Robert had both the height and look of Jim Carter but the job of butler has changed a lot over the years,” says Lady Carnarvon. “In the summer we created a bar outside the castle from which we sell our Highclere Gin and Luis loves coming up with cocktail recipes. He is very much a showman, more flamboyant than Carson.” 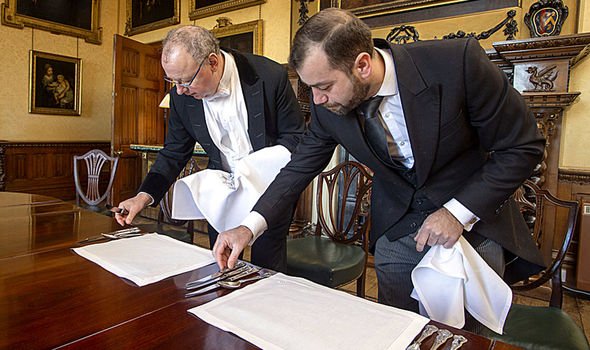 Vines have even been planted to produce a Highclere pink sparkling wine in five years’ time, a project Luis, a sommelier, has taken a close interest in. “If I’m completely overwhelmed with some crisis, he’s always there,” adds Lady Carnarvon.

“Strong winds completely wrecked a Peach house, so we are all trying to work out who to call and he’s always there to help.

“If the alarms go off in the middle of the night, he gets out there. He and his dog (a spaniel called Ted) and his family live in the castle too. It’s great.”

Interview over, I prepare to leave, feeling pretty pleased with my efforts. Sadly, I am informed I haven’t got the job. Perhaps unsurprisingly, it has gone to a more suitable applicant. But I walk away from Highclere relieved to see the stately pile has emerged unscathed from a somewhat unwieldy attempt at ­butlering by a novice.

Carson can sleep easily in his bed.

Before 'West Side Story,' This Steven Spielberg Movie Was Adapted Into a Musical

Kate Chastain Would Return to 'Below Deck' Under One Condition

MPs 'are considering launching their own probe' into Bashir