Ruth Langsford was missing from her usual This Morning Friday spot as her co-host Eamonn Holmes teamed up with Rochelle Humes. First up on the show was a discussion about coronavirus and, as the segment came to a close, Eamonn teased Rochelle as he warned her not to get too close.

As the singer moved closer to Eamonn on the sofa, he warned her: “Don’t touch me!”

Joking with Eamonn, Rochelle suggested: “Can we have a line drawn on this sofa, just in case.”

“I’m sorry,” she remarked while cheekily rubbing her hand on Eamonn’s arm.

Eamonn then questioned Rochelle on an upcoming segment where Alice Beer would be showing them the correct way to wash your hands. 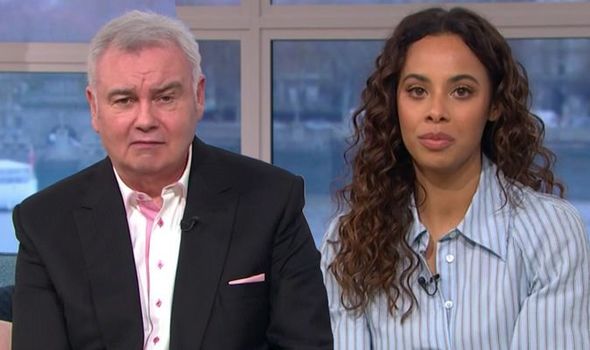 “Alice Beer is going to teach us [to see] if we’re washing our hands properly,” Rochelle explained.

“Cause we all go to the loo and wash our hands afterwards but are we doing it right, that’s the question. She’ll be here a little later on.”

“What were you telling me earlier today?” he asked Rochelle, to which she responded: “Apparently you’re supposed to sing Happy Birthday twice.” 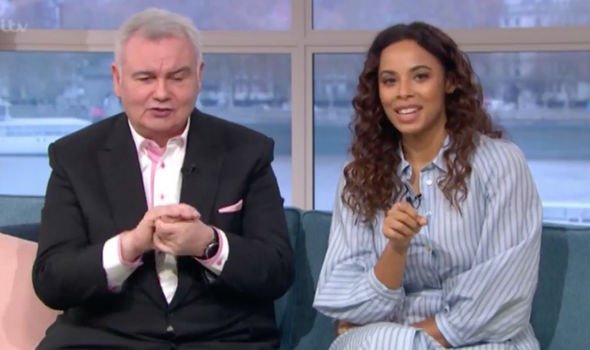 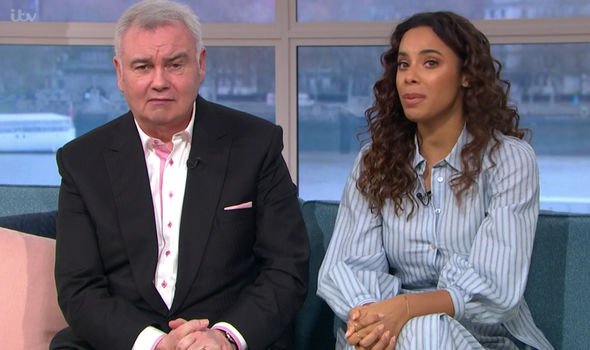 Eamonn proceeded to mime out washing his hands while singing the birthday tune.

“I’ll let you do that and I’ll read this,” Rochelle remarked. “In just a moment Martin Lewis is here to help you save some money.”

While he carried on with the motion, Rochelle jokingly ordered: “One more time!”

Earlier in the show, Eamonn explained why Ruth wasn’t by his side co-hosting the show in the usual fashion.

He began: “Lots of you thinking that Ruth looks really well today.”

As he put an arm around Rochelle, she replied: “Every time this happens you say the same thing, and I’ve told you not to do that.”

Eamonn explained: “Ruth has other things to do today, she can’t be here but Rochelle and I are pairing up.”

“I always say we don’t have to change the mugs in here, the props can stay the same,” Rochelle remarked.

Viewers were confused by the shake-up as one tweeted: “#ThisMorning Omg where is Ruth?”

“Eamonn lost Ruth but looks not that bothered #ThisMorning,” a second joked.

This Morning airs weekdays on ITV at 10am.

Save Me season 3 release date: Will there be another series?