Sharon Mitchell (played by Letitia Dean) is currently overwhelmed with grief after her son, Denny (Bleu Landau) was tragically killed during EastEnders 35th anniversary boat trip on the Thames. On the night of Denny’s death, Sharon was rushed to hospital where she later gave birth to son. Understandably, Sharon has been in automatic mode, not paying a great deal of attention to her surroundings, just going through the motions as she mourns for her eldest son. Because of this, she is yet to name her baby, but Karen Taylor (Lorraine Stanley) provided one this evening and fans thought there was a touching meaning behind it.

Earlier this week, Karen spotted Sharon out with the baby and stopped her for a quick chat.

“I am so sorry, I really don’t know what to say, there’s no word is there?” Karen explained in reference to Denny’s loss.

Turning her gaze to the pram, Karen couldn’t resist: ”He’s beautiful, any chance I could?” And Sharon nodded.

“He looks just like his dad, has he got a name yet?” Karen continued to whittle. “Keanu’s gutted you know, he’s lucky he got off that boat in one piece. I swear, if I ever see Phil again, I won’t be responsible for my actions.” 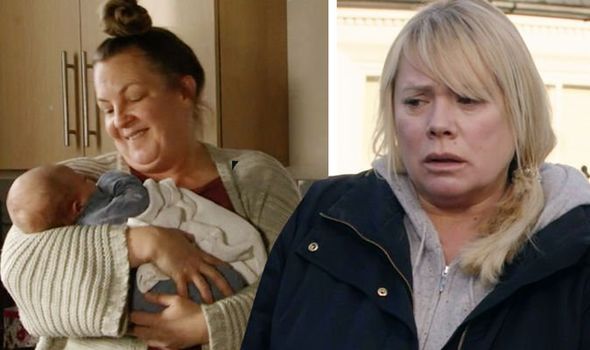 Sharon’s husband’s name perked her attention: “Phil?” And Karen explained: “It was him attacking Keanu which caused the crash. I thought Keanu would’ve told you?”

“Phil killed my Denny?” Sharon stared and Karen ignored answering her question: “Thank God you got this little one hey?

“You can have him for a couple of hours tomorrow if you want?” Sharon remarked which delighted Karen: “Really? That would give you a break, I’d love to.”

Tonight’s episode saw Sharon drop the baby off at Karens: “This means everything to me, it really does. He’d be safe, I won’t take my eyes off him for a blink. You ain’t planning on running away and leaving him with me are you? Not that I would complain?” 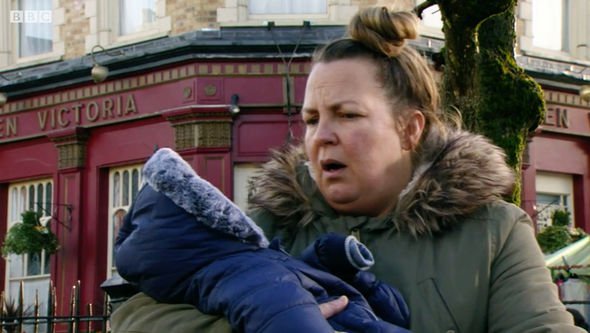 “You know what it’s like, if I’d only bought one, you’d end up needing more so,” Sharon said.

“Thought of a name yet? I was like that with Keegan, I could not for the life of me work out whether he was a Keegan or a Kayden or a Sid. That’s what Chantelle thought he looked like, in the end we went with both,” Karen commented.

“Do you know what? I think he’s got the look of a Kayden don’t you think?” 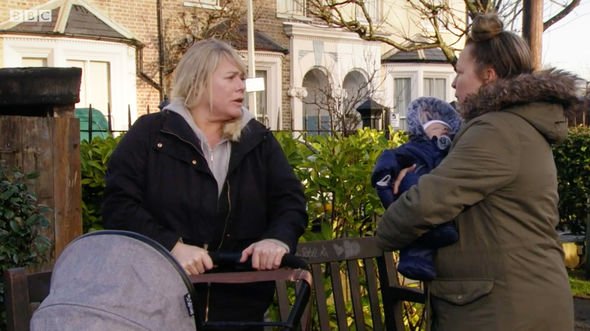 “Karen look I better get off, I’ve got stuff to do,” Sharon replied and left her baby with its grandmother.

Fans took to Twitter to discuss the name chosen for the newborn and many were convinced there was a touching tribute behind it.

One said: “It seems they’ve called the baby Kayden. KayDEN. Get it? Because his dad (possibly) is Keanu and his brother, dad and Grandad were called Dennis. See what they did there? Is that not a stroke of subtle genius? That is a Hitchcock style plot twist for sure. #EastEnders.”

Another surmised: “So Kaden it is, I wondered if she’d get a little Den in somewhere  #EastEnders wonder if she’ll go back to being Sharon Watts now, and the baby will be Kaden Watts.”

“Why do I feel the reason @bbceastenders has gone for the name Kayden for Sharon’s baby is because of the DEN at the end… Coincidence? I feel not! #EastEnders,” another added.

One tweet read: “Laughing at KayDEN. Took me too long to get that one.”

NBA Christmas Day matches: Which TV channel and live stream can I watch on in the UK?