It’s time to get real. Zoey’s Extraordinary Playlist addresses racial bias — unconscious and not — in Tuesday’s episode, which puts John Clarence Stewart’s Simon front and center as he navigates the uncomfortable waters after his company, SPRQ Point, found itself in hot water after its facial recognition technology was revealed to have a disproportionally high error rate when it came to identifying people of color. As the de facto company spokesperson, Simon was supposed to toe the company line but instead he went off-script, choosing to speak the uncomfortable truths about the diversity failures of the company.

Shaped by Black creatives — writer Zora Bikangaga, director Anya Adams and choreographer Luther Brown — the episode focuses on the aftermath of Simon’s comments and further explores the consequences through difficult, painful conversations about systemic racism in the tech industry and in America, and the damaging effects of virtue signaling. The idea for the hour came last summer when creator Austin Winsberg and the writers discussed a multi-episode arc for Simon. “My immediate response was just an immense amount of weight of responsibility that we have to tell the truth, and to do it right,” Stewart tells ET. “And the understanding that I’m a Black man and I didn’t want to tell a story that was inauthentic in any way, shape or form.”

Stewart and Bikangaga connected once the episodes were locked, having very real discussions about their real-life experiences operating through the world as Black men “in white spaces,” the actor recalls. “We got these really frank conversations that found their way into the script, found their way into the dialogue,” the actor shared. “One of the things we also talked about was making sure that everything’s earned, making sure that we don’t shy away from the idea of characters having blind spots, specifically white characters in the episode like our titular character Zoey and [SPRQ Point CEO] Danny Michael Davis, and learning. Fortunately, Austin didn’t shy away from that.”

“Everybody felt an immense amount of responsibility to make sure that all of the characters were [truthful] and that Zoey ends the episode in a different place than she begins. Yes, Simon is moving through this and he is learning the cost of standing up, the cost of responsibility, what it’s like to fully embody and fully embrace his Blackness in a white space, with all the costs that come with that,” he explains. “We’re following her through her journey, learning what allies should be, learning what it is to be really close friends with Black people and without intentionally meaning to harm, but blind spots causing debris and affecting the people that she cared about in ways she did not know. We have the opportunity to have these conversations that are layered and intricate and vulnerable in ways that I’m proud we had in mind. Everybody was game for it and that’s a beautiful thing.”

If there was one thing that Stewart felt important to communicate through the creation of the episode, it was that systemic racism isn’t magically solved by the end of the hour. Far from it actually. And to have the characters address their blind spots, whatever they might be.

“It was important to me that we not soften the white characters, that we make sure they are moving and that they’re fully fleshed out, and that they have these blind spots. The thing about blind spots is that we all have them. Nobody is without a blind spot,” Stewart says. “You can have all of the great intentions. You can be really close friends to people. You can love people dearly and still have these blind spots, and not to shy away from them because if we shied away from the blind spots, then what we have is this story where we conveniently get to these spaces… We conveniently have this capsule episode that is [wrapped up neatly]. We’ve seen things like that before, honestly.” 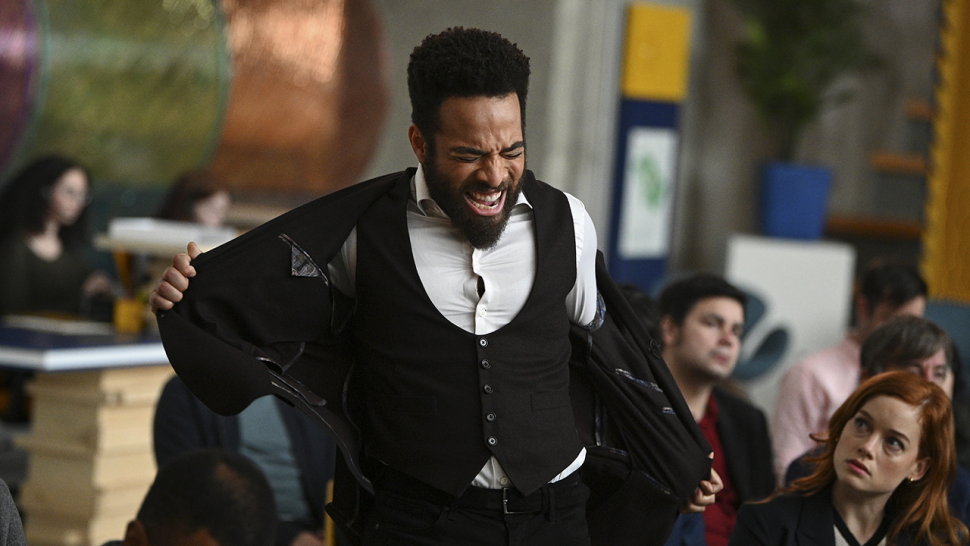 “The only way to get to that space is to earn those moments. Having our characters — all of them — make mistakes and then have to learn from them in real time and have to apply the new lessons they learned in real time, and fumble, and try, and get back up again. It was important to me to highlight that with respect to being in process,” he adds. “A lot of people are afraid to admit that they don’t know what they don’t know. Afraid to admit and take responsibility for the fact that, in their relationships, they said or done things that hurt people, even when they didn’t mean to. Everyone wants to do the thing where they look at the people who are blatantly, in an egregious fashion, hurting people. They don’t want to take responsibility for the subtle lashes, but they’re responsible for it.”

“Here, we have this gift of these characters and this show and a showrunner who aims to create, to fight for the truth, to hold space for conversations that are uncomfortable,” Stewart says, crediting Winsberg. “At the end of the day, through that labor, we birthed something that I’m proud of, that I can put my name on, that I’m OK with being in the world and proud of being a part of.”

Unlike past episodes, this one features a handful of songs by Black artists that are exclusively performed by BIPOC cast members. Lead choreographer Mandy Moore brought in Brown, who has extensive experience choreographing routines for the So You Think You Can Dance franchise and over a hundred music videos for artists like Janet Jackson, Christina Aguilera and Nicki Minaj, to help bring a new perspective to the show’s signature musical numbers.

“It was a transformative experience all around,” Stewart reminisces. (One of the songs he performs is Michael Kiwanuka’s “Black Man in a White World.” Watch it below.) “Having Black bodies and space maneuvering through this material, maneuvering through these given circumstances, [it was] very close to home. They intersect directly with my life, with all of our lives, in various ways. To be able to dive into these songs by Black artists, a direct link into the soul of the actor, and then to have Luther come in stewarding moving along with Mandy, but Luther steering the ship in this circumstance, it creates room for the mind and creates room for magic. It creates room and safety.”

As for what Stewart hopes viewers take away from watching the episode, it’s that they look inward at their own blind spots.

“Specificity breeds universality, right? In this episode, what we tried to do was get really, really, really specific — as specific as we can get — to these characters with where they’re going and what they’re doing. That they move through unpacking systemic racism in their personal relationships, in the workplace. I hope they see themselves, hope they see people they love, I hope that they confront parts of themselves that make them uncomfortable. But I also think that this episode is aspirational,” he says.

“Someone posted on my Instagram a few days ago, and I understand it. They said, ‘I hope that they do this right because this is something that we’re going through now. This is something that’s happening right now.’ We all feel this responsibility because it’s not like anything has been solved. But along with that, the aspirational quality of this episode is that we’re reaching for a fix. We are looking into what we can do, what is possible,” Stewart continues. “We acknowledge that it’s not solved, but we also acknowledge the importance of celebrating wins. Is this by any means a silver bullet? No, there’s still a lot of work to be done. We have a lot of accountability that needs to be taken. There are a lot of corporations in the industry that have to be inclusive at the highest levels of infrastructure where decisions are being made in the boardroom. That said, what we’ve done here is a big, big step in that direction.”

On a lighter note, Stewart praised Zoey’s Playlist star Jane Levy for becoming a first-time Golden Globe nominee. “It’s so f**king exciting,” he celebrated. “Jane is so deserving. She puts in a ton of work and I have the utmost respect for her as an artist and as a collaborator. From top to bottom, what she’s had to do, she’s the reason the show is what it is. We follow Zoey through the ins and outs. She’s in every single scene. We experience every musical number through her lens and it’s crafted meticulously. Her craft in it is just… it’s beautiful to see. So happy that she’s getting recognized by the voting body.”

Zoey’s Extraordinary Playlist airs Tuesdays at 8 p.m. ET/PT on NBC. For more on the series, watch below.

To stay up to date on breaking TV news, sign up for ET’s daily newsletter.

Jersey Shore Bridezilla: Is Angelina Going To Ruin Her Own Wedding?

Kate Mara Says A Teacher Meant to Be Disturbing: 'Comfortable Is Not the Word We Were Going for'