JOJO Siwa confirmed her relationship status after she shared the first photos with her girlfriend, Kylie, and called her "the most loving person in the world."

Just a few days ago, fans were excited when JoJo came out as a member of the LGBTQIA+ community. 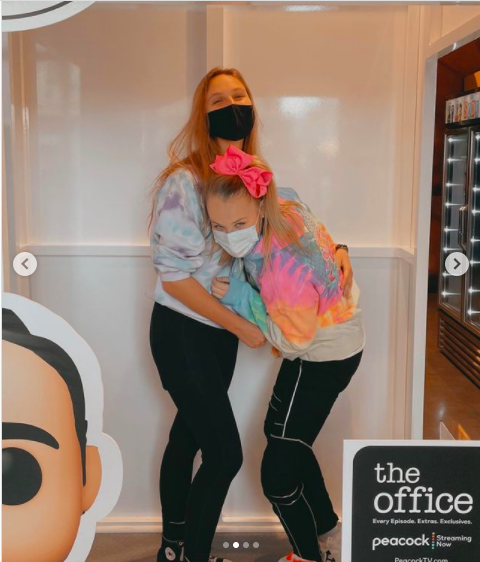 JoJo, 17, took to Instagram on Monday to gush over her girlfriend on their one-month anniversary, making this their social media debut.

The former Dance Moms star shared pics of them holding hands while walking towards a ride at Disney World.

She also shared pics of them hugging while visiting an exhibition for The Office and singing together while riding in the backseat of a car.

Along with the pics, she said: "After being my best friend for over a year, January 8th 2021 I got to start calling this exceptional human my Girlfriend… and Since then I’ve been the happiest I have ever been!

"She seriously is the most loving, supportive, happiest, protective, and just the most beautiful perfect person in the world.

"And I get to call her mine! Happy one month to my girl! I love you more and more everyday!"

Just a few weeks ago, JoJo had revealed in a lengthy Instagram video that she was a proud member of the LGBTQIA+ community.

The Kid In A Candy Store singer stopped for a moment before she went on to explain her thought-out answer.

“I have thought about this, but the reason I'm not going to say this answer is because I don't really know this answer,” the blonde teen confessed.

“Right now, I'm super duper happy and I want to share everything with the world but I also want to keep things in my life private until they are ready to be public.

And when one person asked her how long she had been part of the LGBTQIA+ community, she said: “I don't know. I think my whole life. Because my whole life, I've really really been, I just liked people. But I have never fallen in love before.

“But I always believed that my person was just going to be my person. If that person happened to be a boy, great!

“And if that person happened to be a girl, great! I think I'm just really happy. I think in life you know when you meet your person, I really do."

Following the news, she then also confirmed that she had a girlfriend, who had supported her in coming out publicly.

JoJo told Jimmy Fallon in an interview: "The day after I posted on TikTok, I was on FaceTime with her and we were talking about it, and talking about all of the love that came in and technically I still hadn't confirmed it.

JoJo seemingly first confirmed the news as she took to Twitter to share the photo of herself sporting the tee which read, "BEST. GAY. COUSIN. EVER.”

She wrote alongside the tweet: "My cousin got me a new shirt.”

The dancer first sparked speculation after lip-syncing to Lady Gaga's LGBTQIA+ anthem Born This Way in a series of TikTok videos.

She then continued to spark speculation when she posted a photo of herself posing in a $2,200 Gucci rainbow jacket.

Pop Stars Are Finally Bringing Back This Once-Hated Fall Essential

Jimmy Fallon’s Net Worth: The Tonight Show Host Makes More Than You Think