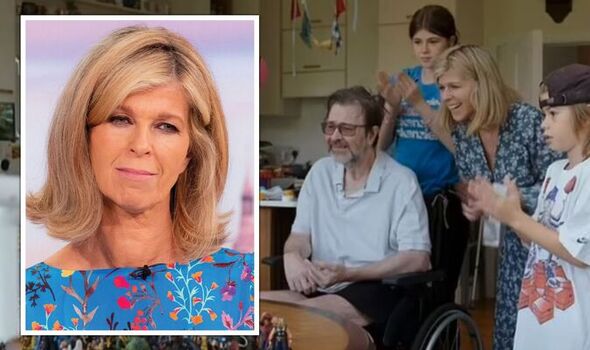 The presenter, 55, returned to Good Morning Britain yesterday having taken time off after Derek’s latest health scare. She explained the full extent of her husband’s condition on the show, saying he had been rushed to hospital on July 9 after taking a turn for the worse – while she was on air.

Kate said: “I got a phone call from the person who was looking after him saying, ‘Right, we’re really worried.’ I whizzed home and it just sort of went boom from there.

“We called an ambulance, went to A&E, where they said he had very severe sepsis, life-threatening sepsis. So it was really dramatic.”

She said they had needed to find the source of the infection fast and get Derek, 54, on the right antibiotics.

Kate added: “His blood pressure was so low. A really junior doctor said, ‘What did you think it might be?’

“He knew that it wasn’t Covid-19 because we tested before we left the hospital on Thursday.

“I said, ‘Well, I did wonder if it was a urine infection, but weirdly we couldn’t get anything for a sample.’ And they just went, ‘Kidneys.’

“Unfortunately, his kidneys were really badly infected, blocked. The challenge now is to save them.

“So that’s where we’ve been for the last three weeks.”

The I’m A Celebrity star confirmed her husband is still in hospital “waiting for his next procedure” but said he is no longer in intensive care.

She said: “One kidney is looking really good. Just need to look at the other one. Still in high dependency [unit].”

Derek has been bedridden since he contracted coronavirus early in 2020. He spent 13 months in hospital, months of it in a medically-induced coma.

The former Labour aide finally returned home from hospital in April 2021 after Kate converted their home and recruited carers to help her and their children.

'Into the Spider-Verse': Fans Could See Will Smith In a Fitting Recasted Role

Coronavirus World: Which countries have banned alcohol while in lockdown?