Venice 2021: The actors’ megawatt charisma is enough to carry the show, at least for a while 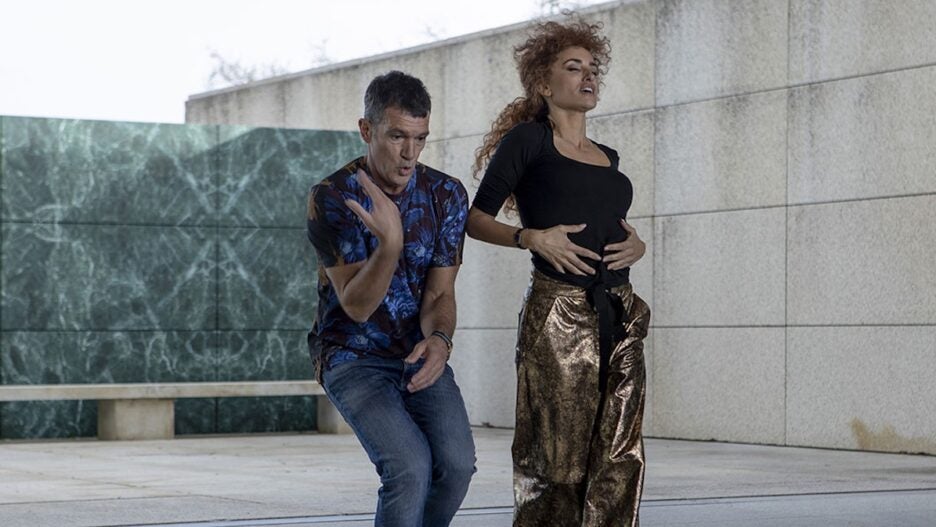 To trot out the old adage, “scratch a cynic, find an idealist” in reference to “Official Competition,” a modest showbiz sendup that premiered, fittingly enough, in official competition at the Venice film festival on Saturday might be putting it a bit too harshly. Frankly, it wouldn’t take more than the morning breeze or the soft touch of an infant to wipe away the thin layer of satire that (barely) covers a deeper, almost evangelical belief in the power of movie stars.

In some ways you could call it a throwback in the sense that it runs totally counter to the high-concept, IP-driven model of recent Hollywood output. “Official Competition” co-directors Gastón Duprat and Mariano Cohn would rather offer viewers a no-concept, light and breezy big-screen hangout, betting that audiences will turn out to watch a pair of beloved celebs cut loose, and that the actors’ megawatt charisma will be enough to carry the show. At least for a certain amount of time, the bet pays off.

Before we’re allowed the warm pleasure of seeing Penelope Cruz and Antonio Banderas at play, we start with a bit of scene-setting: Fresh off his 80th birthday, pharmaceutical magnate/billionaire Humberto Suarez (José Luis Gómez) wants to secure his legacy and his name for perpetuity. Maybe he’ll finance a brilliant art film, or maybe he’ll build a bridge. You can guess what idea wins out (though, to be fair, he also builds the bridge).

If an American studio comedy might do more with the idea of a deep-pocketed old coot happy to pay for anything, here the premise serves a more utilitarian aesthetic role: It offers a convenient excuse to set the action in a handsome, Frank Gehry-inspired art institute the financier owns instead of the more drab decors of a soundstage, which would hardly make for the most visually interesting playground.

Soon we’re off to the races as the two bickering leads take an instant dislike to another, giving the film’s test title another kind of resonance. Over the weeks rehearsing for the upcoming shoot — an overwrought melodrama about two warring brothers, named, naturally, “Rivalry” — they start competing for their director’s attention and for bragging rights as to who is the better performer.

Stage and screen actor Martínez and recent Oscar nominee Banderas both play with comically exaggerated versions of their public personas, with Banderas strutting around as the swarthy Hollywood lothario (asked whether his many children were all with the same, he points to his crotch. “Yup, this guy”) and Martinez as the Argentine theater actor living a life of self-serious disdain for the lower arts.

“I don’t want to be the token Latino that puts a bit of color into an industry for numbskulls,” he answers when asked if he’d go Hollywood. It might not come as a surprise that the next scene finds him practicing his Oscar speech in the bathroom when he thinks no one is looking. Such is the simple set-up/payoff style of the film, which leaves nothing at stake and no one the butt of the joke for too long.

Only Cruz plays a character further away from her public image, not really riffing on any one figure in particular but playing her harried film director as a composite of every unstable auteur. That doesn’t stop filmmakers from playing with Cruz’s own celebrity, shooting a scene where the actress angrily flosses — the dance, not the lie you tell your dentist — because, hey, wouldn’t it be funny to see Penelope Cruz floss? (I guess she doesn’t have TikTok.)

In order to elicit greater emotional depth from her two leads, the director comes up with a series of elaborate exercises, which make up the backbone for the narratively slight shenanigans. In one perfectly illustrative example, Cruz’s character has her two actors perform their lines as a crane dangles a massive boulder over their heads. We know no one is really in peril — no one could be in a film this effervescent — but the scene works all the same, carried by three performers’ delightful screen presences and effortless comic timing as they find new shades of discomfort to play.

Running just under two hours, the incredibly slight film overstays its welcome and then sticks around a good deal longer, especially when it didn’t have that much to say to begin with. But in the end, those flashes of annoyance fade and we can think about the good times, all agreeing that it’s always nice to see old friends.

EastEnders' Mila opens up about her FGM torture in devastating scenes

DC Universe’s ‘Stargirl’ Gets Official Premiere Date on The CW