Sherry Pie’s disqualification made the second half of this premiere a little awkward. Still, fans were excited to watch the next batch of queens showcase their charisma, uniqueness, nerve, and talent. Here’s what you might’ve missed from episode 2 of RuPaul’s Drag Race season 12.

This article contains spoilers from the second episode of RuPaul’s Drag Race season 12. Read at your own risk, squirrel friends!

Note: Due to Sherry Pie’s disqualification, the contestant will be mentioned sparingly in current and future articles. 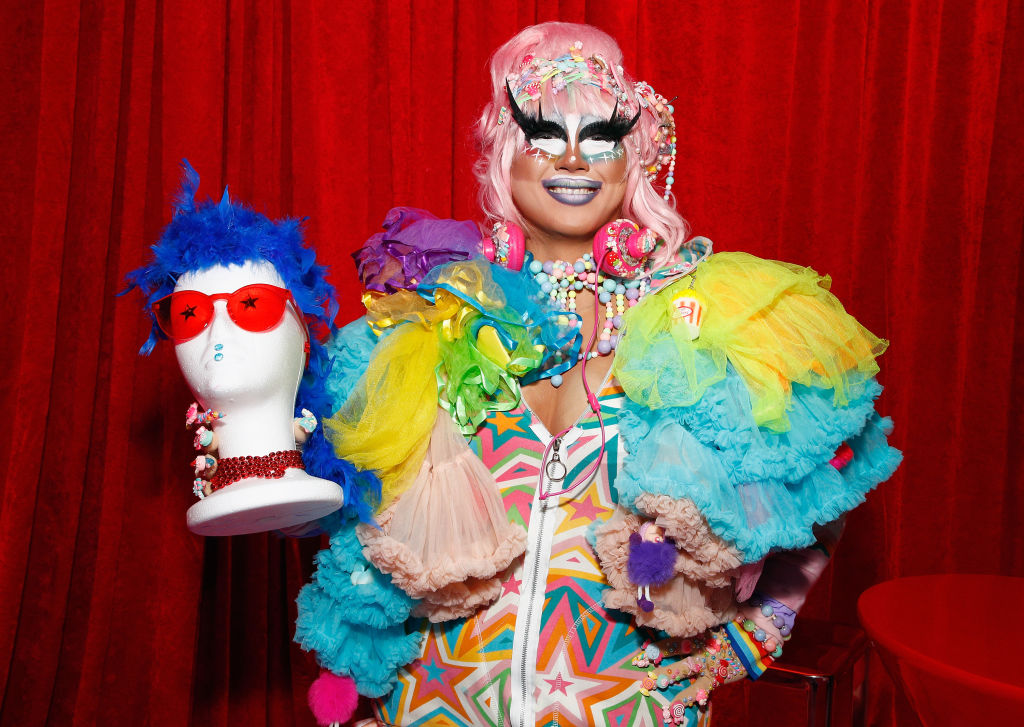 RuPaul debuted the second half of the season 12 premiere

The episode one contestants are just settling in when they get a message from RuPaul — the premiere isn’t over yet, henny. Before walking out of the Werk Room, Widow writes a message on the mirror for the next set of queens. “We done already done had oursus.”

Six other contestants give their introductions. The outgoing-anime loving Rock M. Sakura, the Haus of Aja’s Dahlia Sin, Sherry Pie, the fun, flirty, and fierce “Just” Jan, the self-proclaimed “essence” of beauty, Jaida Essence Hall, and Aiden Zhane, a mysterious queen who loves to act.

Once the queens are all there and trying to decipher the message on the mirror, they hear the she-mail call from Ru. The host welcomes them to the second premiere of RuPaul’s Drag Race 2020. For the mini-challenge, the contestants will be modeling a spring and fall look, similar to the queens on episode one. Understandably, some are more excited about this challenge than others.

Category is: TULLE! Whose lewk was your fav? ✨ #DragRace

The queens get ready for the mini-challenge and maxi-challenge

The mini-challenge is pretty much the same as last week, with each queen serving two looks. Dahlia seems to be grabbing the most attention, but Rock M. Sakura and Jan have pretty fierce outfits, too.

They head back into the Werk Room and are given the maxi-challenge. They must write, choreograph, and perform an original verse to the song “You Don’t Know Me,” a Fosse-inspired musical theatre number. Jan is super excited because one of the first shows she did in New York included songs from Chicago.

After they each write their verse, they head to the mainstage to work on the choreography. Rock M. Sakura is in charge, but, again, other queens keep chiming in and Jaida Essence Hall is visibly frustrated. Through all the blocking and the arguing, they manage to work it all out. They hope.

As they’re getting ready for the mainstage, Rock M. Sakura opens up about her past experiences, primarily with her mother’s addiction issues. Being a leader kind of triggered something in her, because she doesn’t want to lead anyone down the wrong path.

The remaining queens comfort her and reassure her that they’re a family and Rock’s mother’s addiction wasn’t Rock’s fault. Then, Aiden opens up about how she’s feeling going into this musical number. She’s feeling better than the day of the rehearsal, and the others reassure her that it’ll be great.

The category is: tulle

The queens head to the mainstage for their 1920s, Fosse-esque performance of “You Don’t Know Me” and everyone does considerably well. On the runway, the category is tulle and as they get their critiques, it looks like Dahlia and Rock did the worst overall. (A personal favorite is Jan, who dressed as a construction worker, carrying a “tool.”)

The judges deliberate and then bring back the girls. One by one, the contestants safe until its down to two contestants. Just like last week, RuPaul announces, no one will be going home. Jaida Essence Hall and Sherry Pie are the top two of the week, lip-syncing to “Call Your Girlfriend” by Robyn.

After a ruveal and a split, Jaida is the winner and RuPaul says her classic exit, “if you can’t love yourself how in the hell are you going to love somebody else?” Speaking of somebody else… it’s time for these queens to meet their competition. Back in the Werk Room, the other group of girls is waiting. And they have one thing to say: meh.

New episodes of RuPaul’s Drag Race premiere on a weekly basis on VH1.

Arrow Spinoff, The 100 Prequel Still Under Consideration at The CW

Next James Bond: Idris Elba has ‘missed the boat’ but Tom Hardy has a chance (EXCLUSIVE)

Riverdale Reveals the Truth About Jughead