The pandemic has reverberated across all city life, but its impact is especially noticeable in New York. The virus has confined people to their cramped apartments and aggravated the already-strained relationships that most of the city’s renters have with their landlords. Quarantine forced New Yorkers to live in private, and made those of us who live here long for the world outside our windows as we stared out at a place that looked a lot like New York City but lacked its life-force. At first we couldn’t see each other, and then we couldn’t see ourselves. Needless to say, it was a disorienting spring, as even those of us who have lived here our entire lives struggled to remember where we were.

Then came the curfew. Just as the Black Lives Matter protests brought us back onto the streets as part of a defiant reminder that they should belong to all of us, the mayor turned the lights out on the city never that never sleeps. It felt like the most direct assault yet on the identity of New York itself, and reminded me of a movie that someone made during the last time that the people of this city banded together to reoccupy our own spaces; an ecstatic kind of cinematic protest about the fight to take back a place that’s always been promised to us.

Filmed at the height of the Occupy Wall Street, as New Yorkers began to organize against financial inequality, Jacob Krupnick’s “Girl Walk//All Day” is essentially a feature-length music video that uses the Girl Talk mashup album “All Day” as the soundtrack for a joyous urban ballet. It erases the border between public and private spaces by remixing the entire city into the most honest version of itself.

The story, such as it is, bears the simplicity of a silent two-reeler: A rebellious young dancer known only as The Girl (played by the fearless, Moira Shearer-worthy Anne Marsen) breaks free from a stuffy barre class, explodes her black-and-white world into living color, and starts gyrating from Staten Island to Central Park and all stops in between. Along the way, she catches the attention of a suave Gentleman (Dai Omiya) — their unforgettable meet-cute finds them swanning around each other along the High Line — and a limber Creep in a skeleton jumpsuit (John Doyle) who tries to mobilize an athleisure-clad army while Bruce Springsteen and N.E.R.D. trade lyrics in the background.

But “Girl Walk//All Day” is less interested in that bizarre love triangle than it is in the way that New York ripples around it. The movie was produced through Kickstarter donations and shot renegade style on “stolen” locations full of real people who gawk at/ignore/engage with the cast in a way that creates a perfect cross-section of how New Yorkers respond to dramatic self-expression. The result isn’t just the most danceable movie ever made, it’s also a documentary portrait of how capitalism has made us too self-conscious to be ourselves in the city we share with each other.

The obvious realism of Krupnick’s footage endows every scene with the anxiety that his performers will get caught or otherwise called out so far. You marvel at the grace with which the Gentleman dances atop Wall Street’s “Charging Bull” statue, but one of your eyes is watching for someone to yank him down. Later, the Girl briefly lets consumerism get the best of her, as she embarks on a full-body rampage that ends with her being kicked out of Bloomingdale’s and an Apple Store for having the nerve to shop in style. There’s nothing fake about the part where a cop ejects the (utterly fearless) Marsen from Yankee Stadium after she dances on the stands during a game that she paid to see — even our national pastime is policed within an inch of its life, and there’s no telling how that scene might have played out if Krupnick had cast a black man in the lead role. 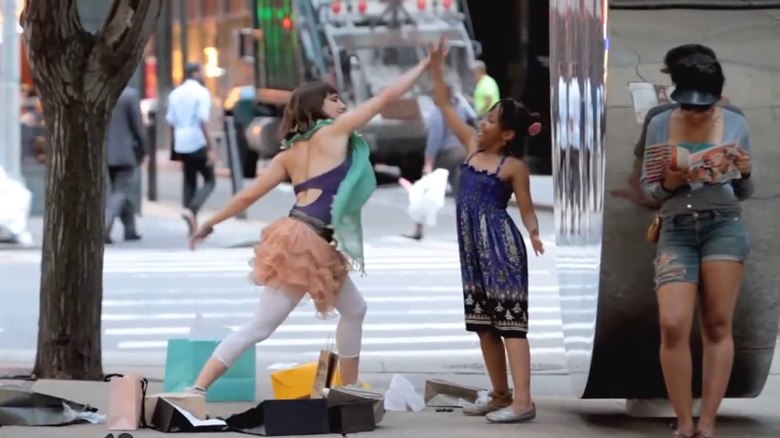 One yuppy in the crowd turns his palms up to the police as if to say “c’mon, she was just having fun,” but he doesn’t take things any further. Other bystanders in the movie get more engaged in the action, as the Girl convinces a chorus line of random women to join her in a “Single Ladies” dance in the heart of the Financial District. A Hassidic passerby gets a rare line of (subtitled) dialogue. A diverse, pre-choreographed group of teens assemble behind the Girl and vogue across the Williamsburg Bridge, displacing any foot traffic going in the opposite direction. Some people on the subway want to get up and dance along with the movie’s characters, while others are still too timid to so openly celebrate the personal freedoms that New York is meant to enshrine.

That’s a personal freedom of its own kind, of course (there’s no introvert-shaming here), but “Girl Walk” is filled to the gills with the singularly digital-age sense that the world is our canvas, and we all have the power to project ourselves onto it. The project was made at a time when most creators were too focused on how smartphones and DSLRs can simulate traditional equipment to realize how this tech can do things that film cameras never could (and that remains the case). Krupnick’s movie dismantles the idea that art has to exist in the spaces that our institutions have reserved for it, or be disseminated through rusty pipelines that keep old systems in place (“Girl Walk” was screened as a series of live events before it was made free to stream on Vimeo).

By the time this endlessly rewatchable film arrives at its massive love-in of a finale in Central Park, it feels like both a party and a call to action. As New York reopens and its political and police leadership face a long overdue reckoning, “Girl Walk” reminds us that this city belongs to its people, who in turn belong to each other. And it won’t be the city we were promised until everyone who lives here is free to dance where they please.

James Bond: No Time to Die will bring back a key part of classic movies

Australian racing tips: Preview and best bets for the Group 1 action on Queen Elizabeth day at Randwick on Saturday

The Queen approved Royal Ascot plans to save meeting in June

Customers Can't Stop Raving About These 16 Face Masks, and You'll See Why