TAYLOR Swift has had her fair share of feuds over the years, including falling outs with Kanye West and Kim Kardashian, Katy Perry and Justin Bieber's manager Scooter Braun.

Her feud with music executive Scooter Braun has been reignited with the release of new song and video, The Man. 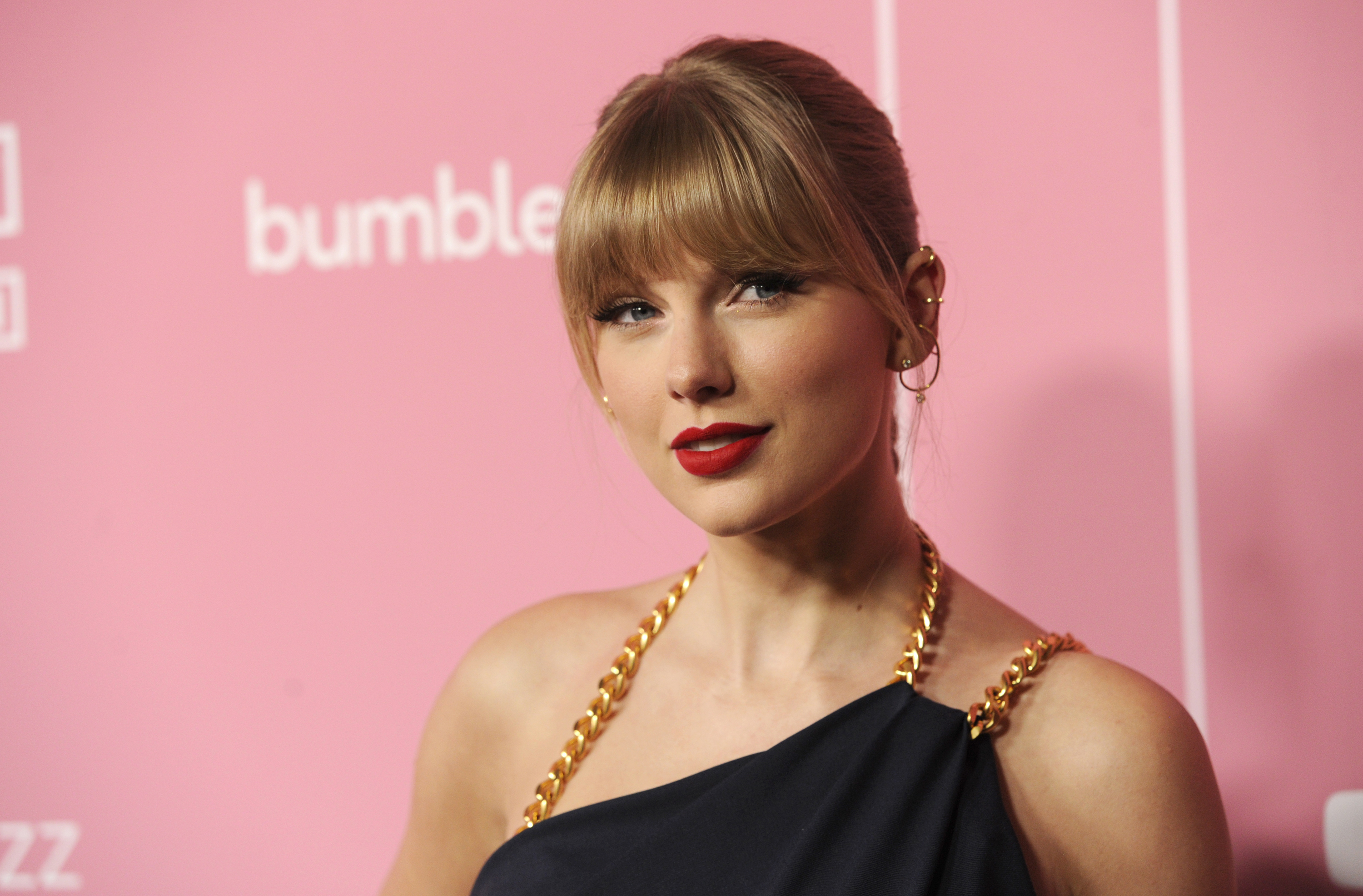 Why has Taylor Swift and Scooter Braun fallen out? 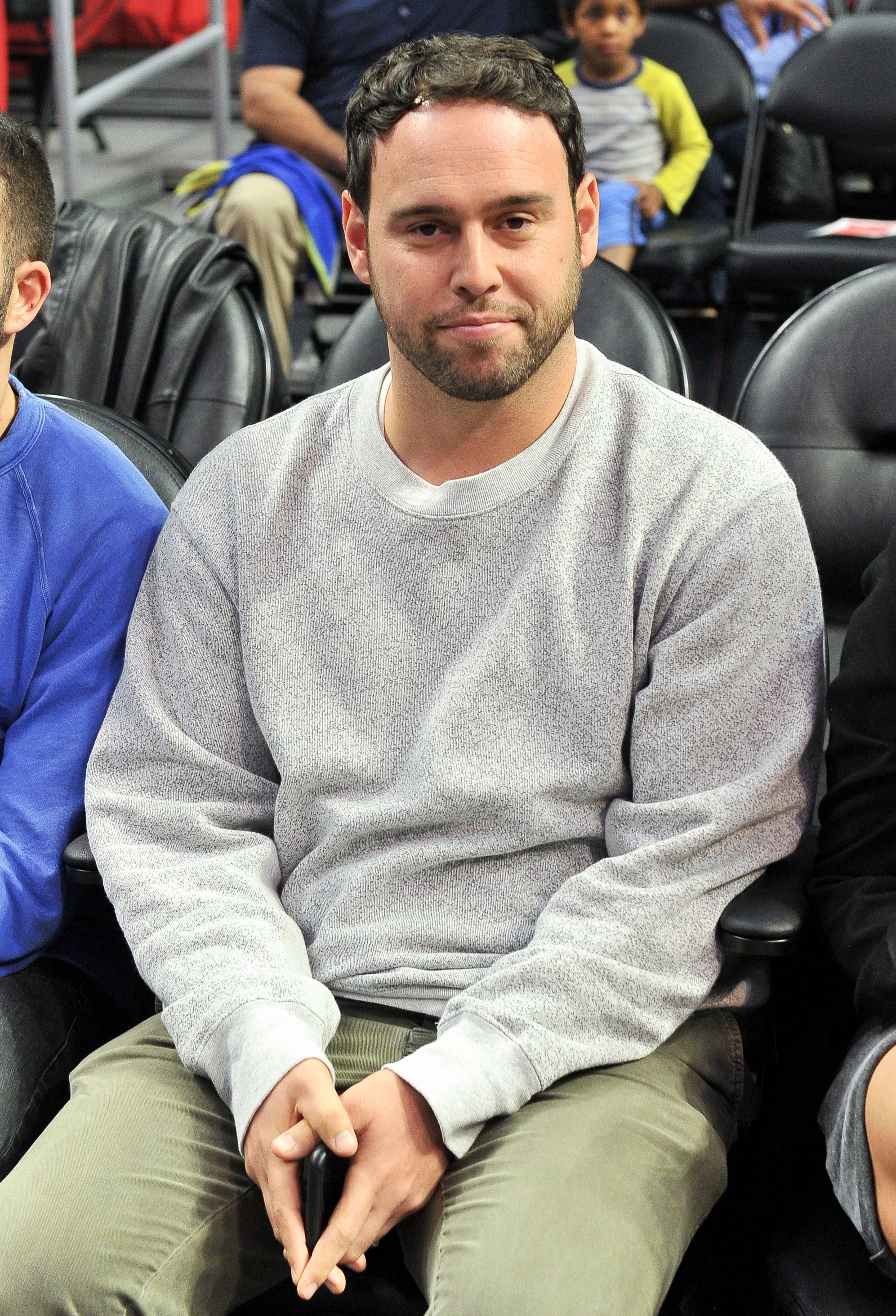 The feud dates back to last summer when reports surfaced about Scooter Brown's $300 million deal to purchase Big Machine Records.

Big Machine Records at the time had a long standing partnership with Taylor Swift.

The deal meant that Scooter Braun now owns the singer's master recordings, which Taylor wasn't too pleased about.

She made her frustrations public in a Tumblr post describing the deal "her worst case scenario".

She said: "All I could think about was the incessant, manipulative bullying I've received at his hands for years."

CEO of Big Machine Records Scott Borchetta countered Taylor's post by claiming he offered her the opportunity to own her masters by way of a potential deal in 2018.

In her new music video for The Man, Taylor takes a swipe at Scooter with a sign which reads "No Scooters". Next to that is another which says "Missing. If found return to Taylor Swift." 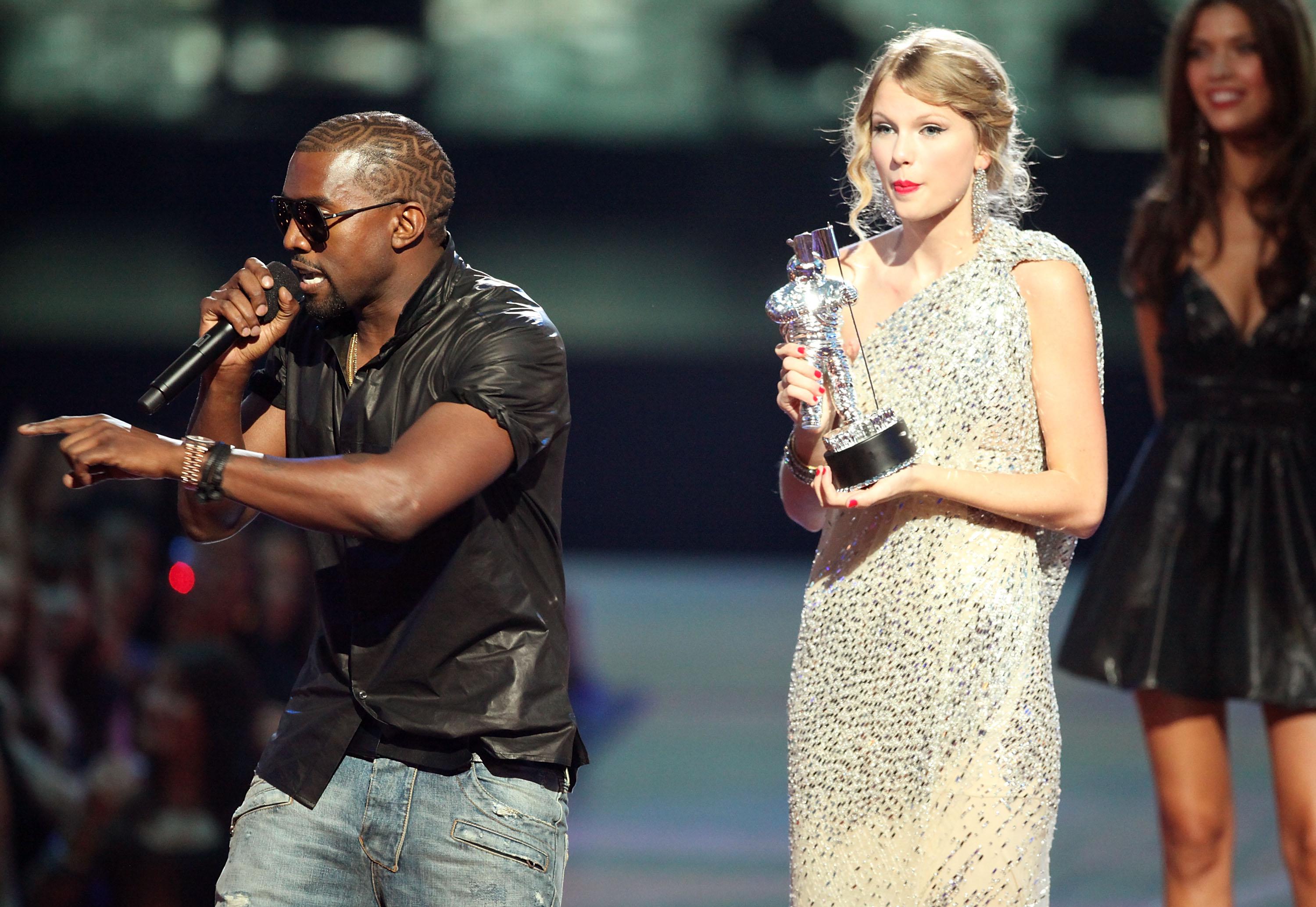 When did Taylor Swift's feud with Kanye West start?

The main celebrity Taylor has fallen out with is Kanye West, with the pair having a spectacular on-off feud which began at the MTV VMAs in 2009.

Taylor, then 19, accepted the Best Female Video award for You Belong with Me, but Kanye stormed the stage and infamously declared "I'mma let you finish" before insisting Beyonce should have won instead.

Kanye later apologised and the pair moved on for a while, before Kanye retracted his apology in 2010 and reiterated it again in a 2013 interview with The New York Times, adding: "I don't have any regret".

But at the 2015 Grammy Awards, the pair appeared to have a massive U-turn, posing chummily for pictures and Kanye talking of a collaboration with Taylor.

In August of that year Taylor presented her former nemesis with the MTV Video Vanguard Award and all seemed well, until February 2016 when Kanye released his new track, Famous.

The song includes the line: "I feel like me and Taylor might still have sex / Why? I made that bitch famous" but Kanye insists he sought Taylor's approval first.

However, Taylor's camp denied this happened before the singer mage a dig at her frenemy during her acceptance speech for Album of the Year at the Grammy Awards later that month.

But then Kanye's wife Kim Kardashian West stepped in (read all about that below) and released a video which revealed her rapper husband did make a call to the singer to tell her about the track.

Taylor hit back and explained that she never knew the word "that b***h" was going to be part of the lyrics. 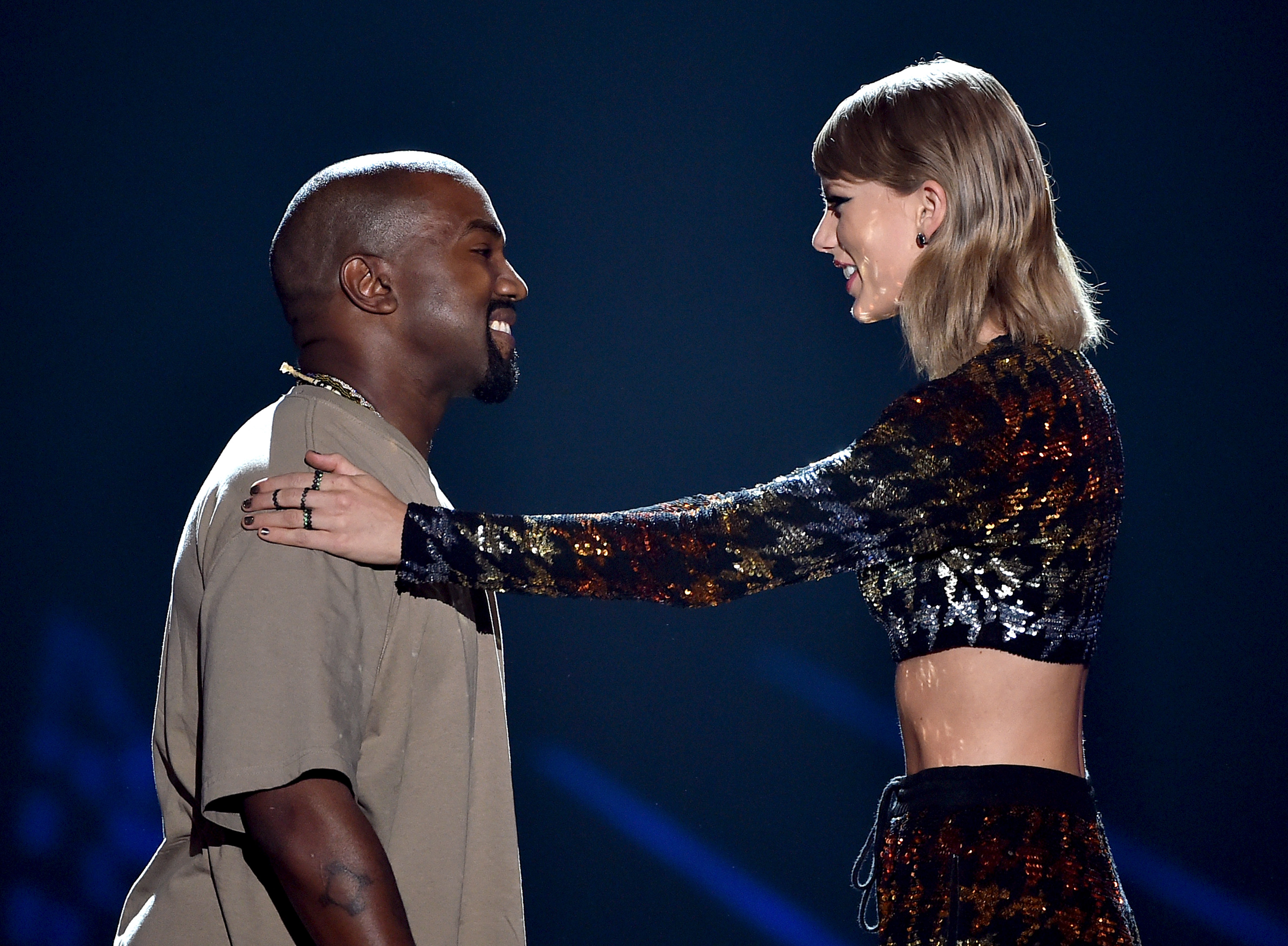 The singer has since made not so subtle digs about the couple in songs featured on both her Reputation album and newest release, Lover.

But in an interview with Rolling Stone, Taylor explained that there had been more going on behind the scenes that fans realised.

She explained that Kanye had been the one to ask for her to present his Video Vanguard Award in 2015.

She said: "He called me up beforehand and we had maybe over an hourlong conversation, and he's like, 'I really, really would like for you to present this Vanguard Award to me, this would mean so much to me', and went into all the reasons why it means so much, because he can be so sweet. He can be the sweetest.

"And I was so shocked that he asked me that, And so I wrote this speech up, and then we get to the VMAs and I make this speech and he screams, 'MTV got Taylor Swift up her to present me this award for ratings!' [His exact words: 'You know know many times they announced Taylor was going to give me the awards 'cause it got them more ratings?']"

She added: "And I'm standing in the audience with my arm around his wife, and this chill ran through my body. I realised he is so two-faced."

While she chose to forgive the rapper after the incident, she explained that they next butted heads when he called her to tell her some of the lyrics of his song Famous, only for her to hear him call her a "b****" in the final version of the track.

Something Taylor had not approved. 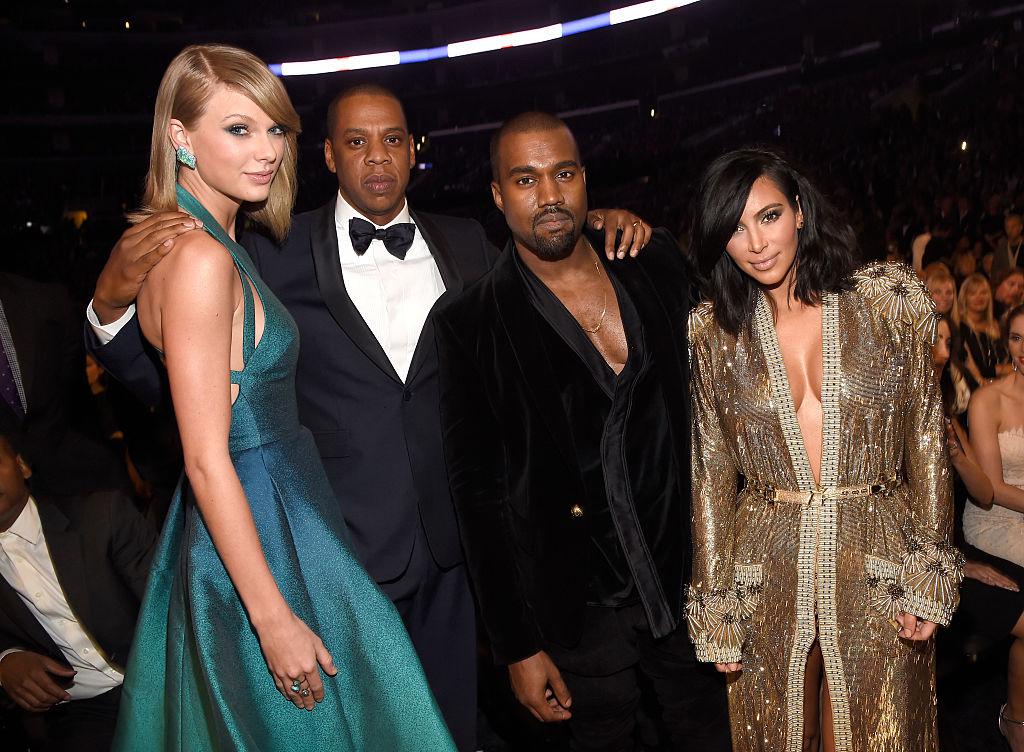 Why did Taylor Swift and Kim Kardashian fall out?

Kanye's wife and reality star supremo Kim Kardashian entered the feud when she told GQ that Taylor had given her husband her blessing over the Famous lyrics.

She said: "She totally approved that, she wanted to all of a sudden act like she didn't.

"I swear, my husband gets so much s*** for things [when] he really was doing proper protocol and even called to get it approved."

But Kim went one step further adding the conversation had been recorded on camera, and the following month she released the recording on her social media for all to see and hear.

However Taylor hit back again on Instagram, saying she never knew the word "that b***h" was going to be part of the lyrics.

In December 2017, Kim reignited the feud after posting a throwback snap of the singer's naked wax lookalike, which appeared in Kanye's Famous exhibition and video.

The mum-of-three posted the pic of her husband’s controversial art exhibit from 2016, which featured a lookalike of the singer in bed alongside Kim, Kanye and a whole host of other big names.

After Kim posted the snap online, she was inundated with comments from Taylor’s fans accusing her of picking on the singer.

They went on to fill Kim's comments with thousands of rat emojis.

Taylor appeared to hit back just 24 hours later, posting a picture of herself from her new Vogue shoot.

She wrote next to the picture: “I never trust a narcissist. 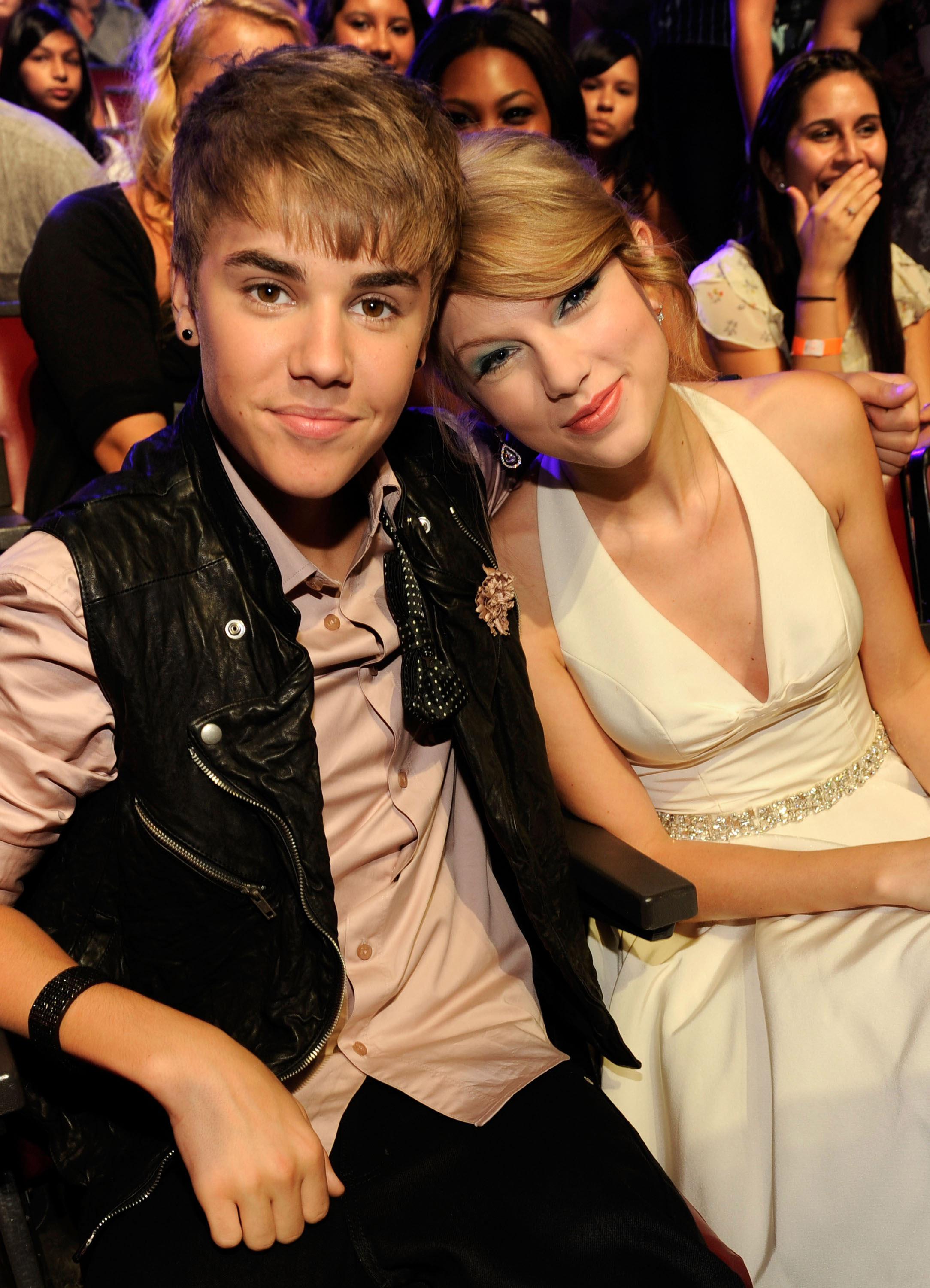 Why has Taylor Swift been feuding with Justin Bieber?

The two singers have been at odds about American entrepreneur Scooter Braun, who manages Kanye West.

Scooter brought Big Machine Records, which Taylor signed to when she first started in the music industry, in a £237million merger deal.

The deal allegedly happened without the songstress having the opportunity to buy back her music.

Taylor accused the manager of "bullying" and claimed he got two of his "clients together to bully her online".

But Justin defended Scooter and questioned why the pop star had publicly bashed the manager.

On Instagram, he wrote: "Scooter has had your back since the days you graciously let me open up for you!

"So for you to take it to social media and get people to hate on Scooter isn’t fair. What were you trying to accomplish by posting that blog? Seems to me like it was to get sympathy you also knew that in posting that your fans would go and bully Scooter." 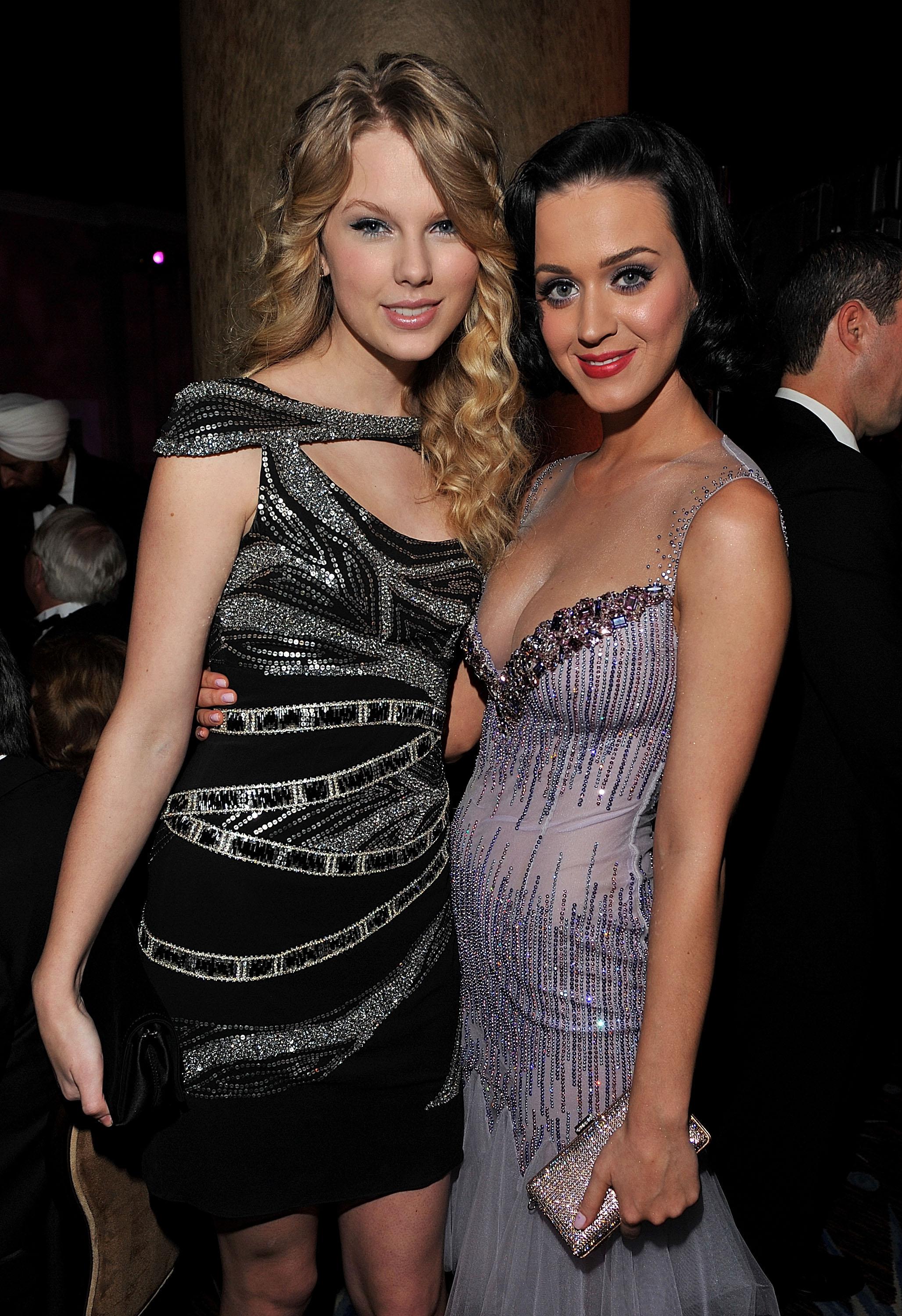 Why did Taylor Swift and Katy Perry fall out?

Taylor and Katy had a friendly relationship right up into 2014, when Taylor revealed her song Bad Blood was about another woman in the music industry who she was now "straight-up enemies" with.

Katy's name was immediately linked to the comments, and the pair made numerous cryptic digs at each other over the following years until Katy finally addressed the feud during her Carpool Karaoke with James Corden in May this year.

She revealed the fallout was over backing dancers, with Taylor believing Katy tried to sabotage her Red concerts by getting a number of dancers to come and join her own world tour.

However, Katy insisted this was not the case, and said Taylor had refused to speak to her about it when she contacted her to discuss the drama.

On May 8, 2018, the feud came to an end when Katy sent Taylor an actual olive branch and an apology letter.

Taylor posted a video of a package she had received on her Instagram Stories along with the words "Thank you Katy".

Then in June 2019 the two women were see back together again for the first time in Taylor's video You Need To Calm Down.

In the vid the pair are dressed up as french fries and a burger and are seen hugging and looking at each other adoringly. 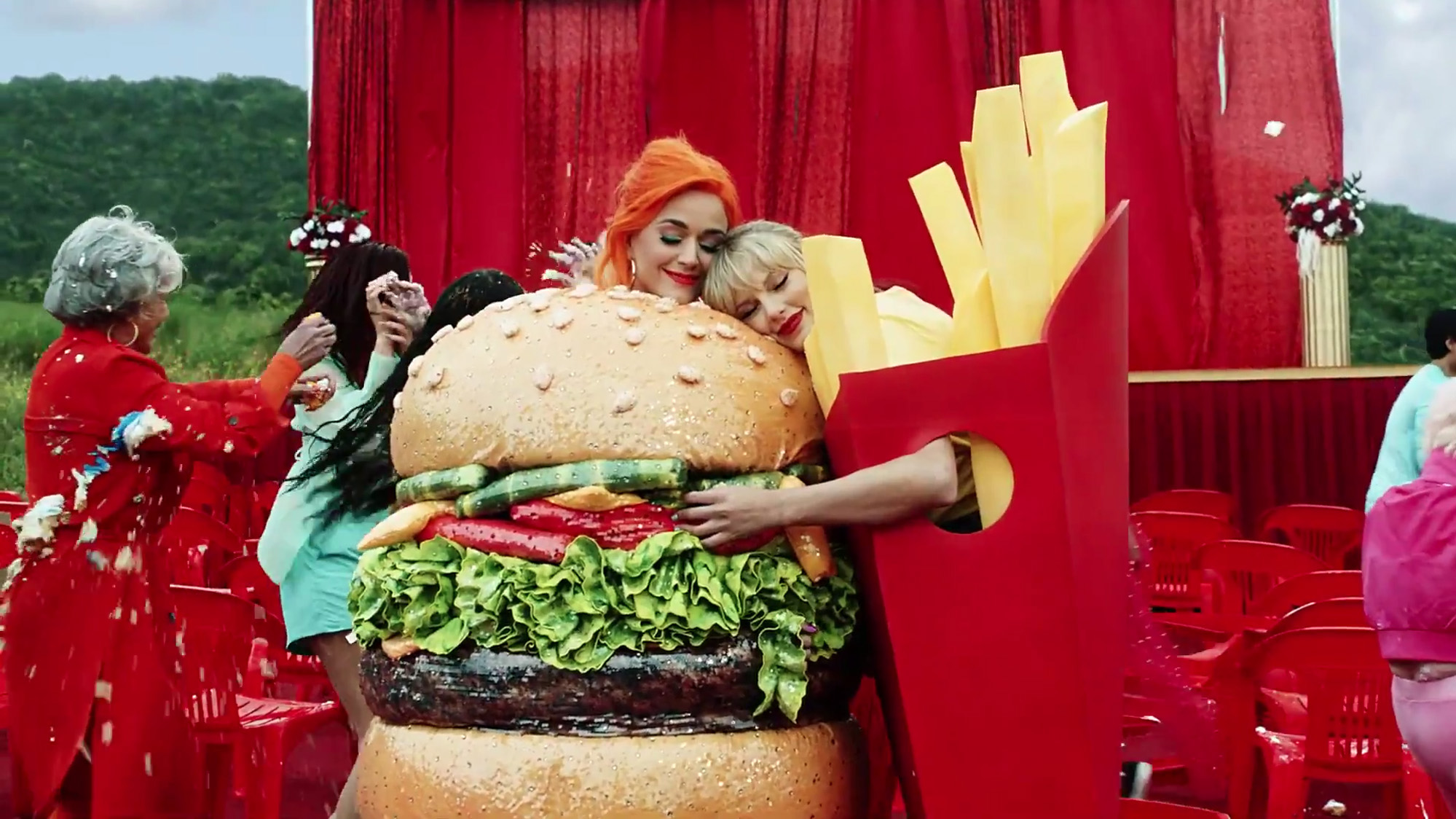 What happened between Taylor Swift and Calvin Harris after their split?

Taylor and Calvin Harris shocked fans when they announced their split in June 2016, and were even more stunned when the singer was pictured cosying up to Tom Hiddleston just two weeks later.

But it was Calvin's track with Rihanna, This is What You Came For which caused things to really blow up.

The couple had originally planned to keep the collaboration on the down low, but Taylor's camp were seemingly unimpressed when Calvin said he couldn't foresee himself working with his then-girlfriend.

Her team confirmed to People Magazine in July that Taylor had written the song under the pseudonym Nils Sjoberg, but in response Calvin tweeted: "Hurtful to me at this point that her and her team would go so far out of their way to try and make ME look bad at this stage though."

He added: "I figure if you’re happy in your new relationship you should focus on that instead of trying to tear your ex bf down for something to do.”

He then twisted the knife even further by referring to her feud with Katy Perry, tweeting: "I know you’re off tour and you need someone new to try and bury like Katy ETC but I’m not that guy, sorry. I won’t allow it.” 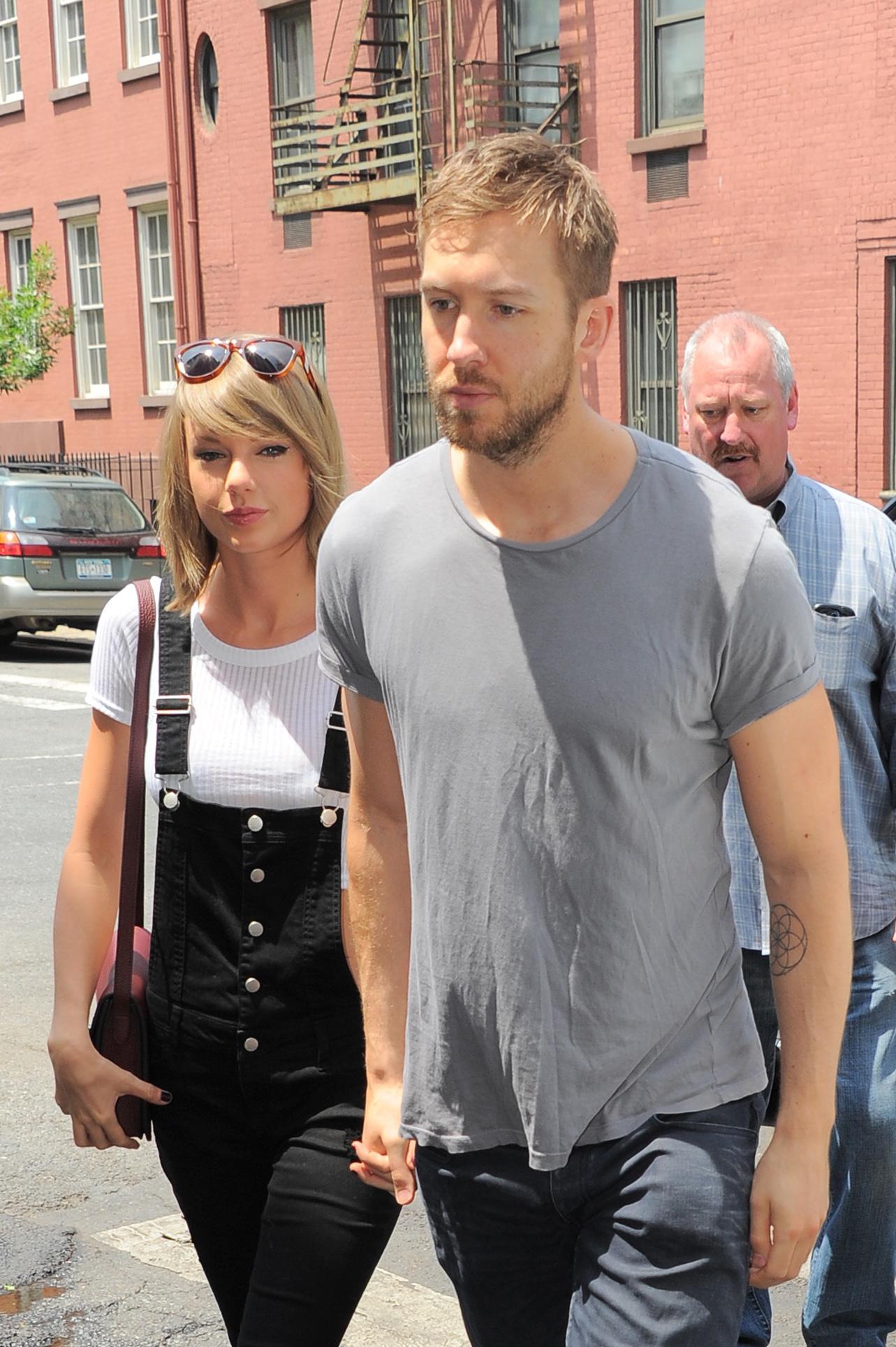 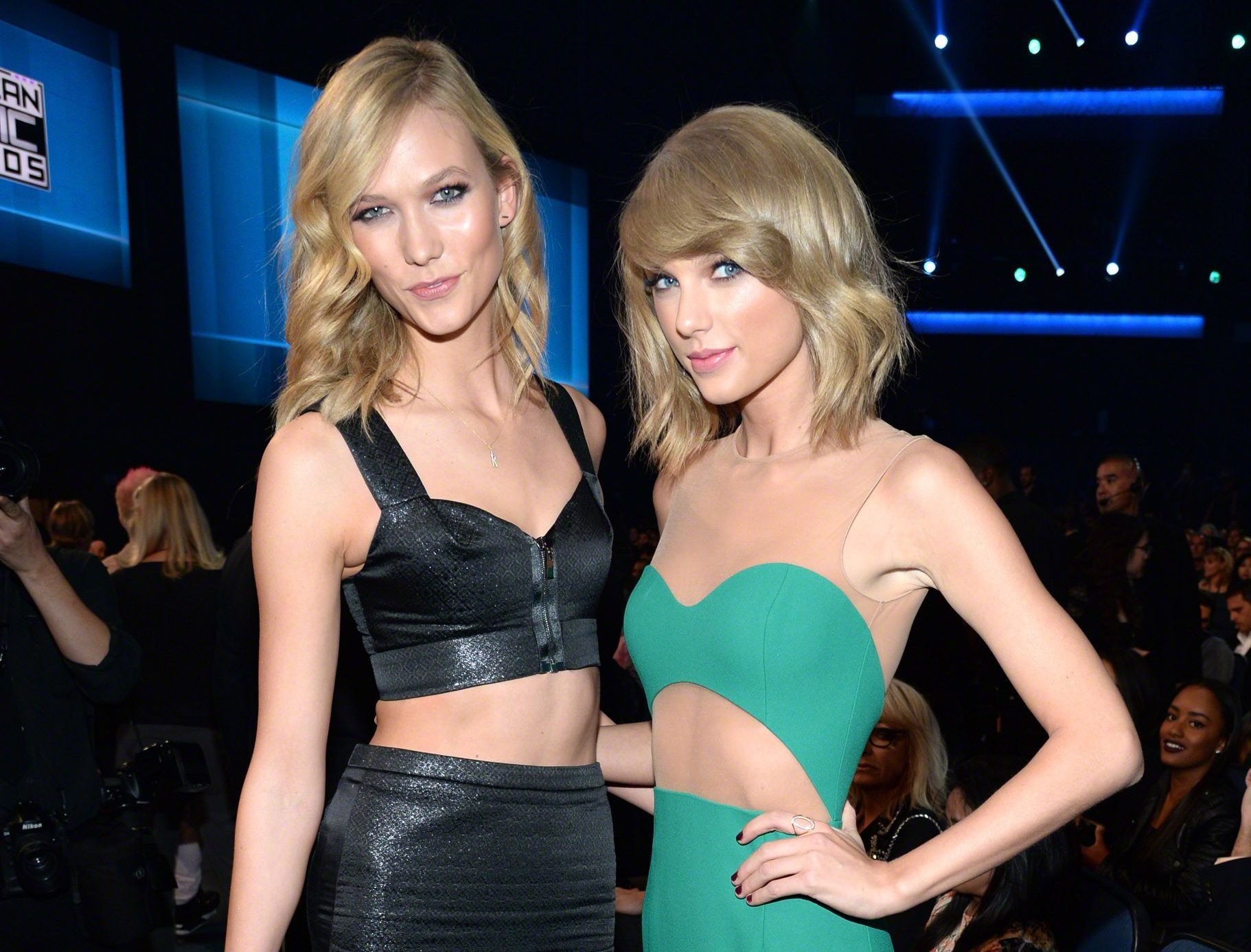 The songstress is said to have fallen out with Karlie after the model invited her friends over to the singer's home without asking for her permission first.

A source claimed Taylor "alienated" the American star after "something crazy" happened.

The insider told the New York Post that the Bad Blood singer was "furious" with the fashion model.

Karlie appeared to confirm she is no longer pals with Taylor, as she holidayed with Scooter, who the musician famously accused of "bullying" in June, 2019.

Scooter, who manages Ariana Grande, shared photos of himself with the blonde and her husband Joshua Kushner on his Instagram account on August 11, 2019.

Mind-reading helmet will plug our brains into AI by 2030, claims biohacker

Heard's 'sexual violence' evidence against Depp will be kept secret