You know how almost every date on The Bachelor involves Peter Weber sitting there in a cozy looking suit while his contestant wears a fancy dress? Yeah, well, as anyone who’s ever worn an evening gown in the middle of winter knows, that sh*t gets cold! In fact, last week’s episode began with Peter and Madison having a convo in a chilly airplane hanger, and when Madison mentioned how cold she was, Peter legit didn’t offer his jacket—which some people felt was kinda rude! But apparently there’s a very specific reason why: he wasn’t allowed to. 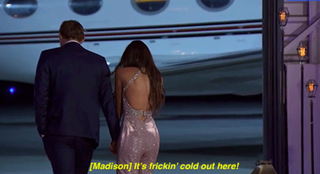 A producer was asked about this moment by Entertainment Weekly, and said “The Bachelor nearly always offers his jacket to every shivering woman sitting in front of him. But [we] tell him not to, because it looks so damn silly.”

Before you fly into a rage at the thought of Peter’s contestants having to sit there freezing to avoid looking “silly,” the producers have a solution. Apparently, rather than having “a small woman draped in an enormous blazer,” they keep a bunch of pashminas on hand in case someone gets cold.

Hmmm, not sure how a simple pashmina is supposed to keep any human warm in the middle of a freezing airport hanger, but kay.

Love All Things Peter Pan? These Tattoos Might Convince You That Growing Up Isn't So Bad