Vikings season 6 left viewers with a lot of questions and not many answers. One source of confusion involves Princess Katya (Alicia Agneson). She is the doppelganger of Freydis that Ivar (Alex Høgh Andersen) can’t seem to come to terms with. It’s important to revisit why Ivar loved Freydis so much to understand the situation a little more. Read on to find out.

Who is Freydis and how does Ivar meet her? 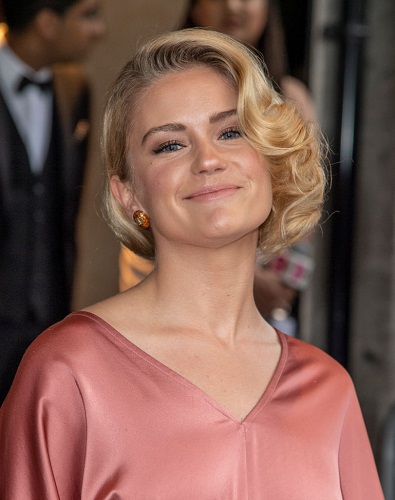 Viewers first encounter Freydis when she is a slave in York. She’s supposed to be sacrificed to the gods, but Ivar frees her. Freydis is able to manipulate Ivar and she tells him he’s special and loved by the gods more than anyone. He wants to believe her and consequently starts to fall in love with her.

They meet again in Kattegat and Freydis tells him she’d die for him if he wishes it. They get married and she becomes the Queen of Kattegat with a whole new future ahead of her.

Freydis convinces Ivar that he is a god. She promises Ivar a child, though it’s impossible for him to give her one. Freydis decides to sleep with someone else to get pregnant and claims the child is Ivar’s. He believes it’s his child for some reason.

The child is born deformed and Ivar leaves him out in thewoods to die. Freydis never forgives him for this and it eventually leads toboth of their downfalls. She helps Ivar’s brothers defeat him and admits it allto Ivar. He kills her for her treachery in the end.

When Ivar lands in Kiev in season 6, he sees Freydis inPrincess Katya, who is Prince Oleg’s (Danila Kozlovsky) new wife. No one elseseems to see the resemblance though, and she seems to be haunting Ivar in everyway.

Why did Ivar love Freydis so much?

Are you prepared to say goodbye?

In season 5B, episode 15, Ivar explains to Freydis why heloves her so much. Throughout his entire life he’s been looked down on and he’shad an enduring rage in his heart because of it. She seems to lessen it all forhim and make it easier to deal with.

“Apart from my mother, I’ve never really known what it meansto be loved or truly love,” Ivartells Freydis. “My father left me outside to die when I was a baby becauseI was a cripple. Everyone has always treated me first as a cripple. All I everwanted was for them to love me. But I saw it was impossible, so I was angrywith everyone. I’ve been enraged all my life. Until now. You expect nothing foryourself but you revealed everything to me. You are all goodness, all truth,and you’re all the world to me.”

“I’m glad,” Freydis tells him. “But just imagine, I was aslave, but now, I carry in my body the son of a god.”

Ivar fell for Freydis hard and she did what she could tomanipulate him. She was a slave who became the Queen of Kattegat. Although sheprobably did love him, when he leaves their child to die, the love is goneinside of her entirely. It signals the end of things for Freydis and thehappiness Ivar supposedly found.

When Ivar sees Freydis again in Katya, it’s a real struggle for him because of everything he’s been through and the love he had for her.