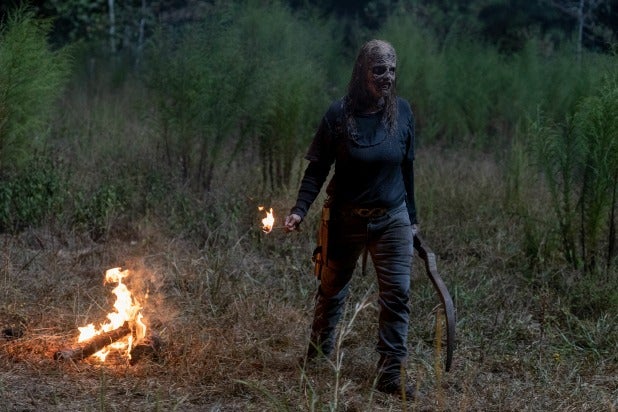 Well, here we are at last. I had expected that the whole Whisperer plotline would come to a conclusion this season, and I think we’re right on schedule with the Whisperers attacking Hilltop this week. The war is here, and things are about to get really crazy.

But I have no idea how this whole thing is going to play out, because we’re pretty far off book at the moment. In the comics, as I previously discussed here, the war between the Whisperers and the various communities doesn’t begin until after Negan murders Alpha and runs off with her head. Obviously, Alpha is still alive even though the war has already started on the TV version of “The Walking Dead.”

This change isn’t incredibly surprising, what with Samantha Morton, who plays Alpha, being the best actor who has ever been on this show. It was inevitable that showrunner Angela Kang and the writing staff would not want to give her a death as anti-climactic as the one in the comic book.

So this week a large chunk of the main characters all end up at Hilltop, including everybody who made it out of that cave-in in the mid-season premiere two weeks ago. And not longer after the Whisperers show up with at least part of their zombie horde.

As the big battle approached it seemed like “The Walking Dead” was about to suffer its first major character death of the new year, but the episode ended with a cliffhanger. The folks at Hilltop had set up a series of defenses, but the Whisperers beat through them pretty easily thanks to a series of sap bombs that they chucked at the Hilltop’s line — and then shooting fiery arrows at them.

The deluge of arrows left the Hilltoppers trapped in a ring of fire, and that’s how the episode ended. This is quite a pickle for all these folks, but I think this is not going to do the way Alpha wants it to go. Earlier in the episode, Negan (Jeffrey Dean Morgan) had been whispering in Alpha’s ear about how she shouldn’t simply kill the enemies of the Whisperers — she should take them, and convert them to the Whisperer way.

This is, I think, Negan making at a good faith attempt at saving lives. I think he really does not want to get back in the business of doing mass murder. Having Negan really just go along with the Whisperers would be a huge thematic break from the comics by essentially abandoning his redemption arc. So I think Negan is about to pull a fast one on Alpha and the rest of the Whisperers.

Near the end of the episode, as the Whisperers get those fire arrows cranking, Negan protests a little bit, telling Alpha that he thought she was going to force the Hilltoppers to join up. And Alpha just replies, “I will. As part of my horde.”

Negan flashes that familiar smile and calls her a badass, but I think we’re just a week away from Negan finally making his move against Alpha.

At this moment, it sure does look like the Hilltop defenders are in a situation they can’t get out of without outside help. But, unfortunately for them, they did not call for help, and so no one is coming. But Negan is there, and he is not in favor of everybody getting murdered. And I just cannot help put assume that the creatives behind “The Walking Dead” are going to have him stay true to his redemption story from the comics by betraying Alpha.

But with Hilltop in dire straits, there sure doesn’t appear to be much time left for him to make a move before Negan won’t be able to help. So it has to be soon.

But it may not be in next week’s episode. In the comics, once the war starts the Whisperers assault both the Hilltop and Alexandria at the same time, and I think that’s also the case on the show since we didn’t see Beta (Ryan Hurst) with the Whisperers at Hilltop. There’s a good chance that next week’s episode will be focused on that attack exclusively, with “The Walking Dead” following up on the battle at Hilltop in two weeks.

Holby City spoilers: Dom's life hangs in the balance and Jodie begs nurses to let her die to save baby

'Sixteen Candles': Where Is the Cast Today?

One dead, four injured in ‘suspicious’ incident in Queens

Is 'Fear the Walking Dead' About to Collide With 'World Beyond'?