In the early months of the pandemic, David Ettershank was diagnosed with an exceptionally painful autoimmune condition. He was prescribed “industrial-grade opiates”, but when faced with a long night of pain he found the most effective remedy was to sit on the back deck and have a joint. 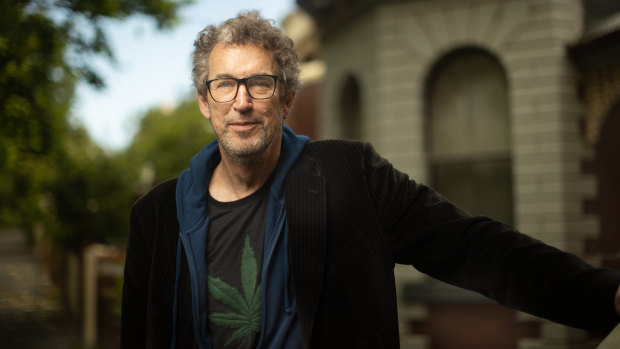 Ettershank would probably have been eligible for medicinal cannabis, which was legalised in Australia in 2016 to treat a range of conditions such as chronic pain, anxiety and sleep issues.

But like many Victorians, he hadn’t discussed it with his doctor, and sourced his cannabis illegally.

“It really upset me, that in taking this very simple self-treatment I was breaking the law.”

Ettershank, who is in his early sixties and has spent the past 20 years working for a consulting firm that assists aged care operators, figured he would never have the opportunity to drive drug reform in Victoria.

And then on Wednesday, everything changed. Ettershank – who had been tapped to stand for the fledgling Legalise Cannabis Victoria party in the state election – won a seat in Victoria’s upper house.

The party secured two seats. Rachel Payne, the former executive of EROS Association, an advocacy group for the adult entertainment industry, was confirmed as an MP in the South-Eastern Metropolitan region. 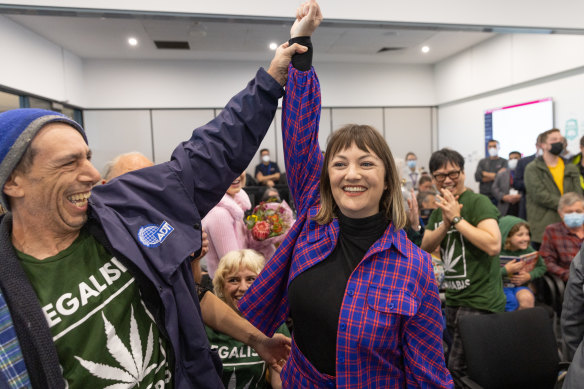 “We are pushing for full legalisation, not just decriminalisation of cannabis,” Payne says.

The recreational use of cannabis is illegal across most of Australia, although minor offences were decriminalised in South Australia, ACT and Northern Territory many years ago, with fines replacing criminal convictions.

In 2020 the ACT went further down the law reform path than any other state or territory, allowing adults to grow up to two plants and possess small amounts of cannabis without penalty.

However it is still illegal to sell cannabis when it is decriminalised, which doesn’t address the black market and criminal networks of drug selling.

“Not knowing what is on the streets, and what is in our cannabis products, causes more harm than actually having a regulated market,” Payne says.

The Victorian Government says it has no plans to legalise or decriminalise recreational cannabis use at this time. But eight of the 11 crossbenchers – whose votes will be critical to Labor passing any legislation – back the legalisation of cannabis.

The Greens – who want to legalise the sale and consumption of cannabis by 2024 – picked up four seats. Animal Justice Party MP Georgie Purcell and Liberal Democrat David Limbrick also back legalisation.

Limbrick said he was excited by the possibility Victoria could become Australia’s first state to legalise cannabis.

“My advantage over other pro-cannabis parties is my ability to help bring conservatives over to support the idea,” he said. “If we play our cards right, this will happen in this term.”

So how close are we to changing the law?

According to Premier Daniel Andrews, it’s not on the agenda.

“We have got no plans at this time to do that and that’s been our consistent position,” he says.

Andrews has often raised drug-induced psychosis as a concern and said for a percentage of the community there is no safe level of cannabis.

However, behind the scenes, there is support within the government to reform cannabis laws to reduce criminal activity, allow problematic users to get support without fear of being put through the justice system, regulate what is sold and save on law enforcement costs.

The government will need the support of six Upper House crossbenchers to pass legislation.

Election analyst Dr Kevin Bonham says Labor is most likely to negotiate with the Greens and Legalise Cannabis Victoria. 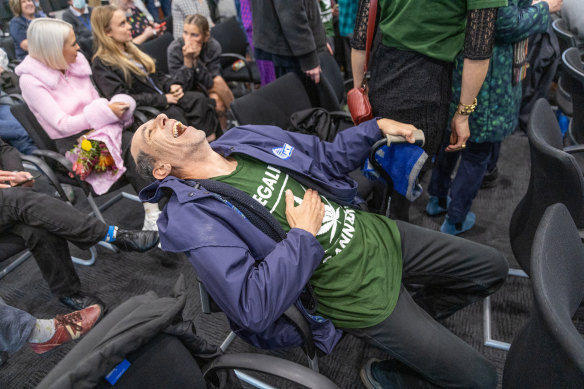 “The other pathways for Labor to get things through without the Legalise Cannabis party are much more difficult,” Bonham says. “So I think that will mean that the legalising cannabis issue is prominent during this term of government.”

There are some hints that the socially progressive government – which in 2016 became the first state to legalise medicinal cannabis and in 2018 introduced safe injecting rooms – is open to further cannabis reform.

Legalise Cannabis Victoria received Labor’s second preference in four regions, which the party’s secretary, Craig Ellis, said signalled a massive shift for Labor given the party doesn’t have a policy to legalise cannabis.

Reason Party leader Fiona Patten – who said one of her biggest regrets was that she could not get legalisation of cannabis over the line during her eight years in the Upper House – believes there is a mood for change within government.

Patten chaired a two-year state parliamentary inquiry into the use of cannabis in Victoria.

Although the three Labor MPs who were part of the inquiry watered down a proposed recommendation that Victoria legalise cannabis for personal adult use, they did sign off on calling on the government to investigate the impacts of doing so.

“This signals a willingness on the part of the government to consider law reform,” Patten says.

Several countries – including Uruguay, Malta and Canada – have legalised the personal use of cannabis over the past decade. In the United States the use of marijuana by adults is lawful in 21 states. Legalisation is now so commonplace The New York Times recently wrote it did not “make major news often anymore”. In October, US President Joe Biden pardoned thousands of Americans convicted of “simple possession” of marijuana under federal law.

The push for reform comes at a time when more Australians support the legalisation of cannabis than oppose it (41 per cent to 37 per cent), according to the 2019 National Drug Household Survey.

“It’s really a politically safe space for the Victorian government to be in now,” says Samaras.

“You’ve got so much support in the crossbench, there’s even some Libs I reckon you’ll get across on this. And then of course knowing that you’ll have a significant portion of the electorate that will support it, I just don’t see any downside.”

The shadow minister for mental health, Emma Kealy, said the Liberals and Nationals would assess any new legislation on its merits but would not announce a position before it was tabled in Parliament.

Each year about $1.7 billion of taxpayers’ money is spent on cannabis-related law enforcement in Australia, according to a report by the Penington Institute, a drug policy organisation, this month. 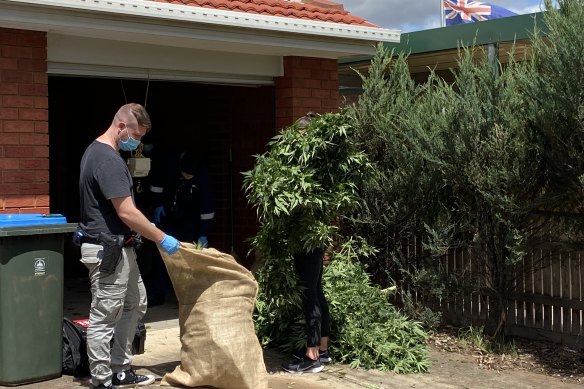 Despite its illegal status, cannabis is readily available, with more than a third of Australians aged over 14 admitting to having used it.

In Victoria alone, there were almost 9000 cannabis use and possession offences recorded in the year to September 2021, accounting for 92 per cent of all cannabis offences during this time.

Samaras says polling shows that voters – especially those under 40 – get “really cranky” at the prosecution of users. “The community no longer has this 1980s or 1990s aversion to recreational cannabis. I’d say the political risk is not doing something in this space when there is an opportunity.”

One priority for pro-cannabis parties that the Premier does appear willing to examine is the impact of roadside drug testing on those taking medicinal cannabis.

These lick tests detect THC – responsible for the psychoactive effects of cannabis – which can remain in the saliva for days, even though actual impairment only lasts a few hours. 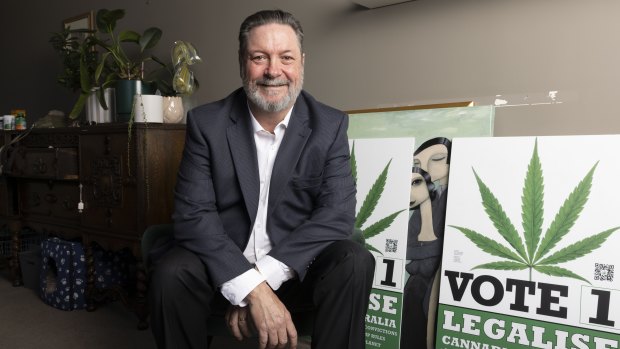 They have led to people losing their licences and livelihoods even if they hadn’t consumed cannabis for days before the test.

“At the moment the roadside drug testing regime is actually just a tool of prohibition, rather than road safety,” says Legalise Cannabis Victoria secretary Craig Ellis.

Ellis has a prescription for medicinal cannabis but says he often decides to instead take the addictive opioid Endone because he is worried about losing his licence.

“That’s just wrong,” Ellis says. “I mean, when we’ve got an opiate crisis in this country, we need to be using as many policy levers as possible. The maintenance of this unfair, discriminatory situation is just pushing people to use opioids and benzodiazepines which are dangerous if people are driving while affected by them.”

“There is strong evidence that demonstrates the presence of drugs as a contributing factor to driver fatalities and serious injuries, which is reflective of Victoria’s legislative mandate to detect for presence of illicit drugs, including cannabis,” a spokesperson says.

But Andrews acknowledges there are people who are not taking the medicinal cannabis they need because “it’s a binary test – you either test positive or negative. There is no 0.5 for this.”

Andrews said he is not sure whether there is a way to fix the conundrum.

“It certainly proved difficult to find one during the last parliament, but I’ve always got an open mind,” he said. “You would never want to have a barrier in place to people getting the care that they need.”

The use of cannabis does not come without risk. It has been linked to psychotic disorders, according to the Royal Australian and New Zealand College of Psychiatrists, with frequency of use and high-potency cannabis elevating the risk.

“We know that recreational cannabis use is really common within our community in Australia and we know that for a small minority of people that use can be harmful,” says Associate Professor Shalini Arunogiri, the chair of the faculty of addiction psychiatry at the college.

The college does not have an official position on whether cannabis should be legalised.

But Arunogiri says criminalising cannabis is harmful because the stigma prevents people coming forward for treatment.

Victoria Police said in a statement it does not support the legalisation of cannabis.

“Victoria Police does, however, have a long-standing and recognised drug caution, diversion and referral process for people found using or possessing illicit substances,” a spokesperson said.

This provided early interventions, such as referral for support and treatment, the spokesperson said, before the harms associated with drug use become more problematic.

He says emerging evidence suggests fully commercial, profit-driven legalisation of cannabis in US states such as Colorado had led to low prices, high-potency products and higher levels of use.

“Twenty per cent of the heaviest cannabis users are responsible for 80 per cent of the sales and the commercial entities target those users because it’s where they know their profit is,” Lenton says.

“If you have a free market model which is profit-driven, you get the same sort of problems that we have seen with alcohol and tobacco.”

Lenton would like to see Australia go down a different path and adopt a “middle-ground option”. 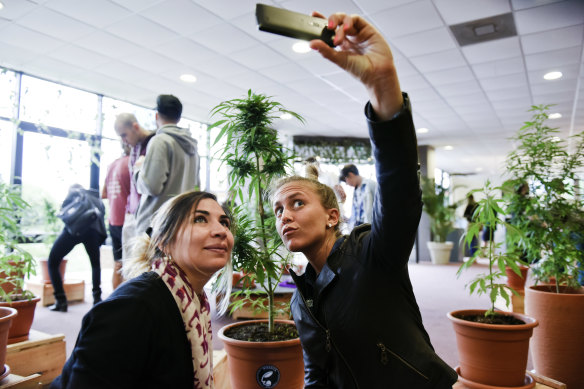 Visitors take selfies at the Expo Cannabis Fair in Uruguay in 2015.Credit:AP

He points to the Canadian province of Quebec, which has limits on the number of retail outlets and the potency of products, and Uruguay, which has non-profit cannabis social clubs. The social clubs, which are registered by the Uruguayan government, are a place where members can grow and exchange cannabis. They monitor the quality and offer advice to members who may be smoking too much.

“There are a lot of different ways to do it and not going down the profit-driven commercial pathway is a sensible place to start,” Lenton says.

The pro-cannabis MPs say they are keen to work with the government on an approach that reflects good public policy. “What we are after is progress,” says Greens health spokesperson Dr Tim Read. “We just don’t want people being dragged before the courts, given criminal records and even locked up for being involved in cannabis.” 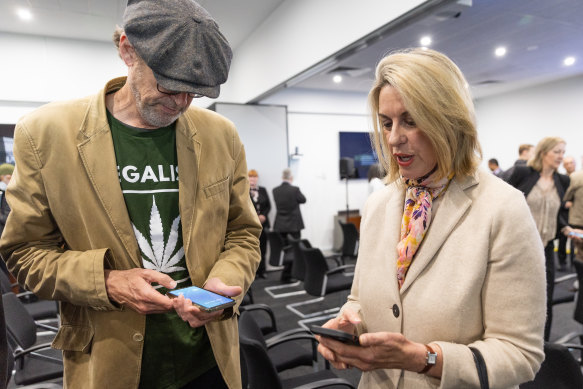 This week the Premier reiterated that there were no plans at this time to embark on drug reform.

“But that doesn’t mean other people have the same view,” he said. “There will be debate, there will be discussion. There will be others who I know have very different views to me. That’s the beauty of our democratic system.”

It's appalling we've reached 100k deaths in the UK, but this jab gives us real hope

Billie Eilish Claps Back At Rumor She ‘Got Fat’ After Tank Top Pic Goes Viral: ‘This Is Just How I Look’