Covid-19 rates continue to fall across the UK as symptom-tracking app says fewer than 10,000 Brits are being struck down each day

An app tracking people’s coronavirus symptoms has suggested fewer than 10,000 Britons are now being infected every day.

Data from the COVID Symptom Tracker, created by scientists at King’s College London, suggests there are currently 9,400 new daily cases across Britain.

But the app does not include care homes, where the virus is still thought to be rife – meaning the true infection rate could be significantly higher.

The figures were based on nearly 20,000 swabs taken between May 17 and May 30 and extrapolated to the wider population.

They suggest that 7,400 people per day catch the virus in England, along with a further 2,000 across Scotland, Wales and Northern Ireland.

Its statistics add to growing evidence that the UK’s crisis is petering out and is largely in line with Government estimates, which suggest there are 8,000 new infections every day.

But some of the country’s top scientists believe there are still too many new cases to ease lockdown. 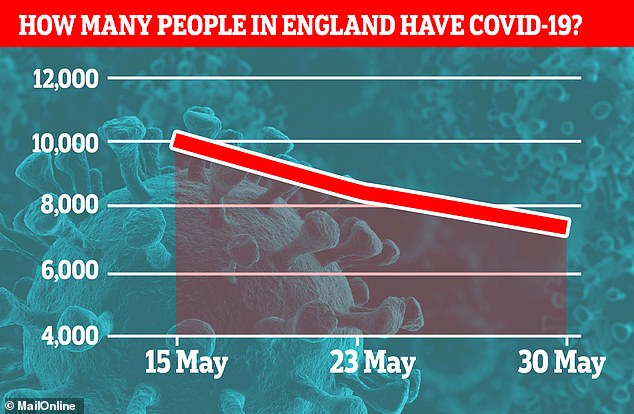 Data from King’s College London’s app suggests that the number of people catching the coronavirus each day in England has dropped from almost 10,000 in the middle of May to around 7,400 each day now

All areas of England are seeing new cases fall, but northern regions appear to still be bearing the brunt of the crisis.

The North East and Yorkshire are recording the most new daily infections, with 1,965 people getting infected each day.

This is closely followed by the neighbouring North West, where there are 1,608 daily new cases.

This contrasts with the South West region, where the infection rate is more like 300 per day.

In London, formerly the epicentre of the UK’s crisis,  the researchers predict there are around 1,100 new cases per day.

Data from the app is used to make the calculations by considering the proportion of people who use the app who report symptoms that match Covid-19, and who report having received positive or negative tests. It has tracked these measures over time.

One of its developers, Professor Tim Spector, said: ‘We are now able to provide a reasonable estimate of the number of new infections within the population based on swab testing.

HOW MANY PEOPLE ARE CATCHING THE VIRUS IN EACH REGION?

The COVID Symptom Tracker team have used their data to estimate how many people in each region of the UK are catching the coronavirus on a daily basis.

These are their estimates.

All figures are mid-range estimates and have ranges of up to 700 higher or lower.

‘This means we can keep a close eye on the numbers to help us spot any sudden rises or falls.

‘From the latest data, we can see that there are still a lot of new cases in the community, particularly in the north of the country, although rates are declining.

‘In London where numbers are lower, we are seeing little change over the last fortnight, which suggests we need to watch this carefully, especially as we continue to see lockdown measures eased and children head back to school across the UK.

‘The more people that use the app, the more accurate our predictions are for each region’

The King’s College results are based on a sub-group of 1,030,000 people using the COVID Symptom Study, of whom 13,464 carried out swab tests after feeling unwell.

These figures give a real-time view of COVID infection rates, unlike the Department of Health’s count of deaths, which lag by about two weeks or more.

The UK figure of 9,400 was calculated using swab testing and app symptom data collected over the period 17-30 May, from users of all ages and spread throughout England.

The data for Scotland and Wales were indirectly estimated using country-wide averages. These are less accurate and have wider intervals of error.

Health data from the approximately 2.5million users was combined with physical COVID swab tests to create an accurate view of what COVID looks like in the population on a day-by-day basis.

The daily new cases estimate does not account for those in the population who have no symptoms at all or are living in care homes.

‘We will be updating this regularly, which will provide vital information to the NHS, local authorities and government as we all look to ease our way out of lockdown.’

The app update comes after data from the Office for National Statistics last week suggested that 8,000 people per day are still becoming infected with the virus.

It said the progress of the outbreak shrinking is slow and the presence of the virus in the community had dropped only 0.01 per cent in the past week.

The ONS described the outbreak as ‘relatively stable’.

This means one in 1,000 people catch it each week.

Explaining that 8,000 people per day are still catching the infection, the UK’s chief scientific adviser Sir Patrick Vallance said: ‘That is not a low number.

‘So it’s worth remembering that we still have a significant burden of infection. We are still seeing new infections every day at quite a significant rate, and the R is close to 1.

‘That means there is not a lot of room to do things and things need to be done cautiously, step-by-step, and monitored.’

Richard Kay: ‘Many inside royal circles refer icily to Meghan as ‘The American”