The heat is (still) on: Australia is set to swelter through a scorching Autumn as mercury soars to above average temperatures

Australia’s sizzling summer might be coming to an end but the sweltering heat looks set to stick around a little longer.

Forecasters are predicting a warmer than normal autumn this year, with temperatures likely to be above average for most of the country.

However, Bureau of Meteorology climatologist Dr Andrew Watkins has warned residents not to pack away their wet weather gear just yet.

The sporadic rainfall which pummeled the east coast throughout February looks likely to continue during the start of the season, he said. 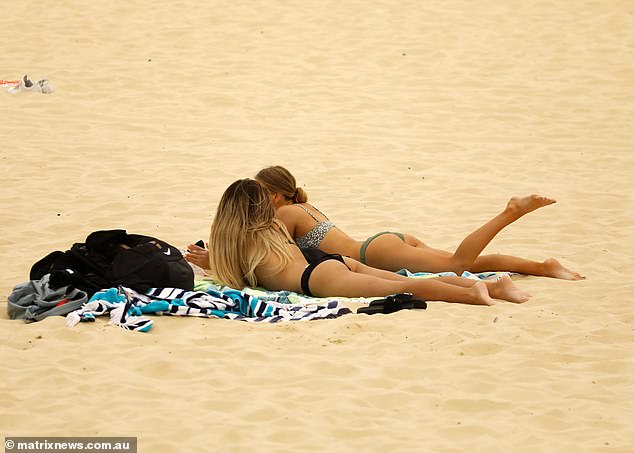 Australia’s sizzling summer might be coming to an end but the sweltering heat looks set to stick around a little longer (pictured: Sunbathers at Sydney’s Bondi Beach) 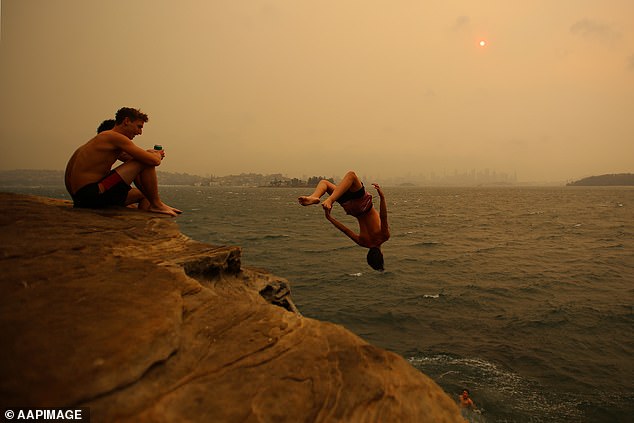 Forecasters are predicting a warmer than average autumn this year, with temperatures likely to be above average for most of the country (pictured: Boys play on rocks at Sydney’s Nielsen Park in haze produced by bushfires) 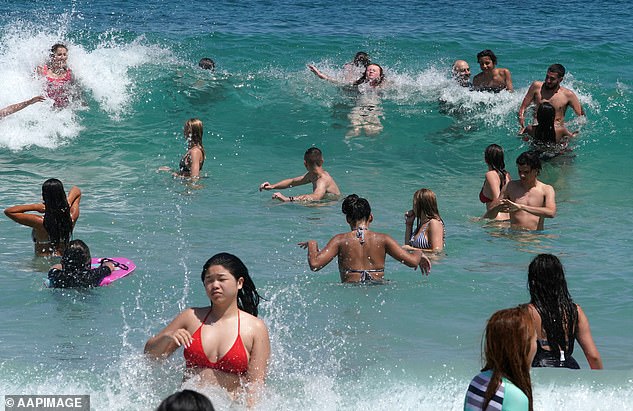 Australia’s summer was the third-warmest on record and temperatures looks set to remain high over the next three months (pictured: Swimmers at Bondi Beach)

But towards the end of March it should start easing off and become a more neutral weather pattern.

Dr Watkins said many areas were showing no strong push towards wetter or drier than average conditions in the coming months.

However, some parts of the tropical north may have a drier end to their wet season and parts of southern and south eastern Australia are showing a slightly increased chance of above average rainfall in the coming three months.

Despite the destructive downpour only weeks ago – which turned streets into rivers and caused power outages to thousands of homes as it brought rivers back to life and provided relief to many farmers – Australia’s summer rainfall was still below average.

‘The rainfall helped contain many of the long-lived bushfires in the east and helped ease drought conditions in some locations,’ Dr Watkins said.

‘But many inland regions experienced only patchy rainfall and we still need to see sustained rainfall to relieve drought in many areas. 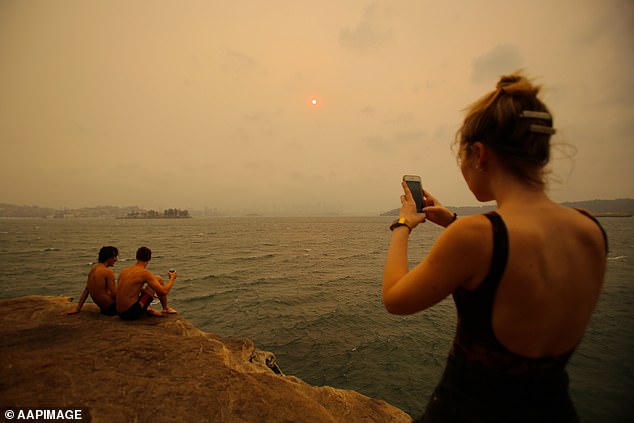 It was a grim start to summer with devastating bushfires in much of the country (Pictured: Smoke haze from bushfires blankets the Sydney CBD as beachgoers stand on a cliff in Nielsen Park in December) 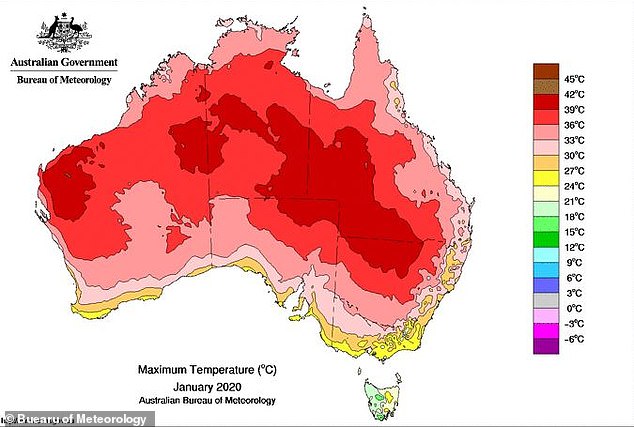 With only a few days remaining, the summer of 2019/20 is shaping up to be among the three warmest on record for Australia. And despite good rain for some areas in February, summer rainfall was below average for the country as a whole

‘Although the extra moisture and cloud moderated temperatures compared to the record warm December, January and February will still rank among the ten warmest on record for the country as a whole.’

And that trend looks set to continue over the next three months with a warmer than average autumn predicted for the state.

‘It will be still staying quite warm for NSW. Some of the southern parts might be easing back to normal temperatures but generally a warmer than average autumn. 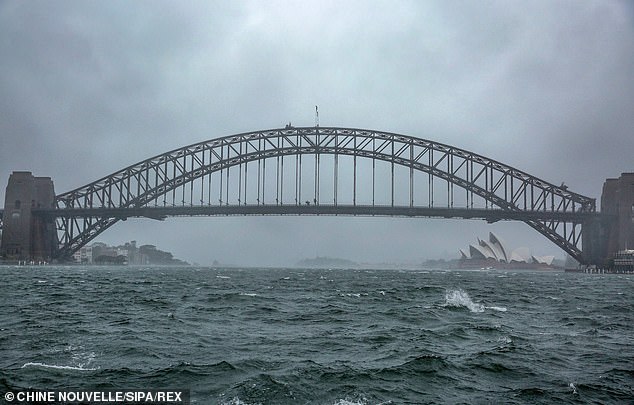 February was a wild month for weather, with massive storms battering then Harbour City and causing large swells just weeks ago 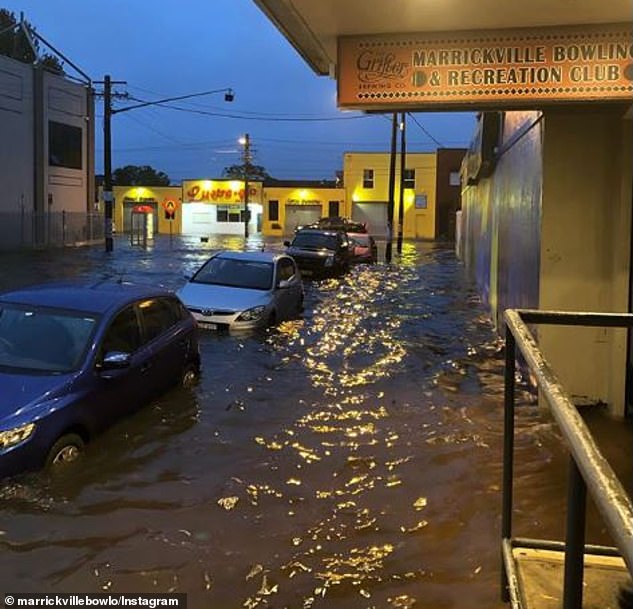 ‘We are looking at above average rainfall in March to start off autumn but we are looking at that easing off to more neutral patterns over the remaining months of the season.’

Victoria had a warmer than average summer, recording its third driest December on record.

The three month-period was also the second warmest on record for Queensland. The state had a dry start to summer, but that began to ease back in January.

Rainfall for Queensland looks to be drier over the next three months. The mercury will remain high with the warmer temperatures lingering above average, Dr Watkins said.

It was also a warm and dry summer for Tasmania. Hobart recorded half its average rainfall over the three-month period.

Dr Watkins said there was no indication that rainfall for autumn would be above or below average for the state, however, temperatures looks like it will be higher than average. 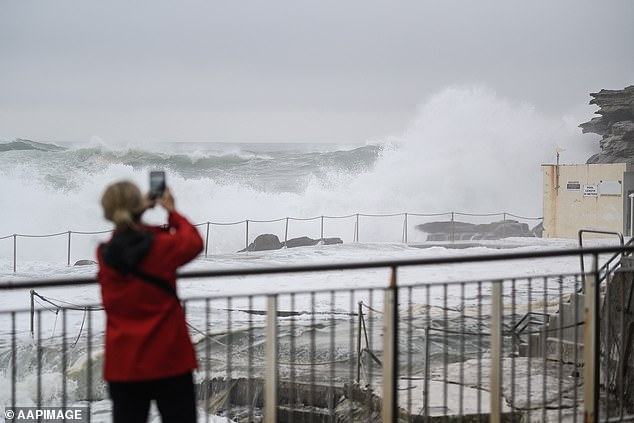 A woman braved the bad weather on Monday to go for an early morning walk. She stopped to take a picture as a huge wave hit the rocks at Bronte Beach 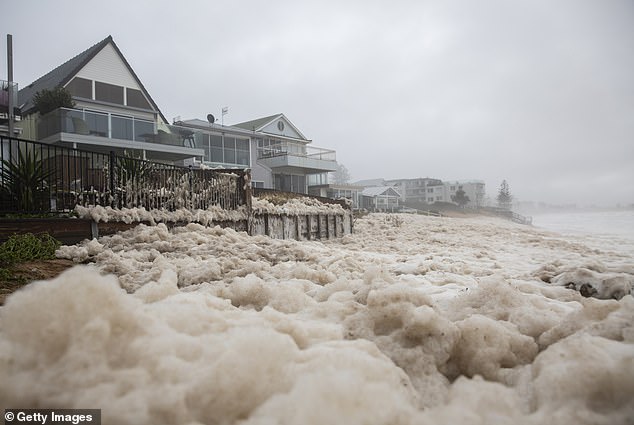 A woman braved the bad weather on Monday to go for an early morning walk. She stopped to take a picture as a huge wave hit the rocks at Bronte Beach

‘Certainly its been dry this season and the the last wet season as well, meaning some of those catchments are down to half full at the moment.’

The state continues to look warm for day and night time from March with drier than normal conditions.

Like the rest of the country, Western Australia was warmer than average, however, it recorded above average rainfall for the summer period.

This was due to two tropical Cyclones, Blake and Damien, which brought good rainfall into inland WA.

The southern state will have a wetter few months ahead, while parts in the north will see drier than normal conditions.

Odds of wetter than normal conditions throughout autumn in South Australia have increased. However, it will be a little wetter in the southern parts, Dr Watkins said.