Former special forces soldier Ben Roberts-Smith has lost a legal bid to have his former wife cross-examined over access to his emails, with a judge describing his claims against her as “ill-founded” and ordering him to pay her costs.

Mr Roberts-Smith is suing The Age, The Sydney Morning Herald and The Canberra Times for defamation over articles that he says wrongly portray him as a murderer and war criminal. Last year, he also launched action against his former wife, Emma Roberts, to find out if she gave confidential information to the newspapers’ lawyers. 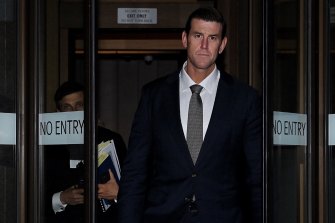 In response to that action, Ms Roberts was ordered to provide certain documents to the court and explain how she obtained them, while the newspapers and their lawyers in the defamation proceedings were subpoenaed for any documents Ms Roberts had given them.

Ms Roberts complied with the orders, and no documents arose from the subpoenas.

Dissatisfied with his ex-wife’s affidavit, Mr Roberts-Smith then made a further application to have her cross-examined, and to expand his action to include Ms Roberts’ best friend, Danielle Scott, and Ms Scott’s husband, whom he alleged also had access to his emails.

On Friday, Federal Court Justice Robert Bromwich dismissed those applications, saying there was insufficient basis not to take Ms Roberts at her word.

As for the case against Ms Scott’s husband, “threads of material relied upon … do not even rise to the level of a bare prima facie case”, the judge said.

Ms Roberts is expected to be called as a witness for the media in the defamation trial, which is due to return to the Federal Court in Sydney on February 2, after being interrupted amid the COVID-19 outbreak that led to lengthy lockdowns in NSW.

However, while the surge in cases following the arrival of the Omicron variant has not resulted in a lockdown or court closures in NSW, news overnight that Western Australia would continue its strict border closure indefinitely might cause further headaches for the trial.

As four out of the six witnesses who are due to be called by the newspapers live in Western Australia, a case management hearing on Friday heard the state’s decision not to lift its quarantine requirements on February 5 might affect the respondents’ ability to proceed as planned.

Barrister Lyndelle Barnett, appearing for the newspapers, said her team was “working on a solution” and “exploring” the possibility of relocating the trial to Western Australia after the first two witnesses are heard in Sydney. She said she would take instructions and have a proposal for the court next week.

Mr Roberts-Smith’s barrister, Arthur Moses, SC, said that his team had already raised moving the trial as an option last year, but the Commonwealth had indicated it would involve a delay of three months.

“It’s not a matter of us saying we told anybody so,” Mr Moses said, but, “we always expected that something like this may happen”.

Tourists describe trying to save survivors of White Island volcano