‘Jealous and possessive’ gardener, 26, who broke his 19-year-old girlfriend’s arm and nose after complaining she’d run his bath too hot is jailed for three years

A ‘jealous and possessive boyfriend’ who broke his partner’s nose in a row over the temperature of his bath has been jailed for three years.

Landscape gardener Ryan Moors, 26, met Claudia Collins, who is now 19, through her brother and the pair started a relationship in 2018.

As the couple were getting ready for a weekend away to celebrate Miss Collins’ birthday in late 2019, she decided to fill up the bath for him.

Moors, from Poole, Dorset, complained it was too hot and when Miss Collins told him to add some cold water he flew into a rage and punched her in the face, fracturing her nose.

In another incident, on June 14, 2020, Miss Collins went to bed but got up to make herself something to eat, but Moors woke up and became angry that she was out of bed.

He punched her and then kicked her when she fell to the ground, breaking her left arm which she put up in defence when he went to kick her in the head, Bournemouth Crown Court heard. 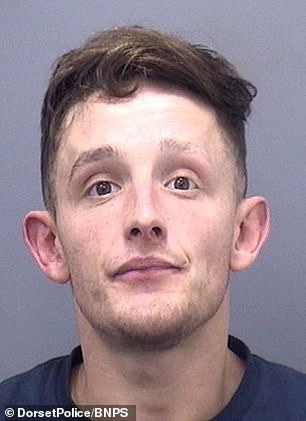 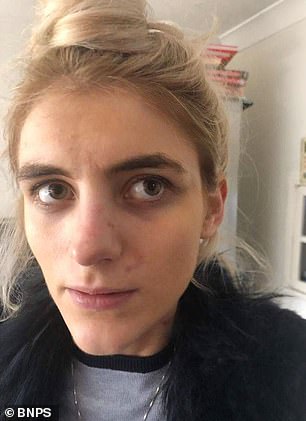 Moors, pictured left, complained the bath was too hot and punched Miss Collins in the face, fracturing her nose. Right: Miss Collins with black eye 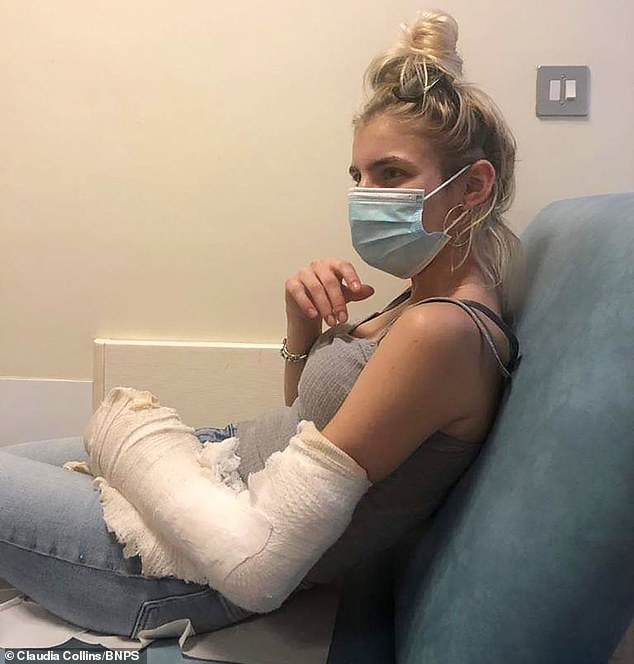 Moors punched and then kicked Miss Collins her when she fell to the ground, breaking her left arm which she put up in defence when he went to kick her in the head, Bournemouth Crown Court heard. Miss Collins, who works in retail, went to bed in a lot of pain and Moors took her to Poole Hospital the next morning where her arm was put in a cast

Miss Collins, who works in retail, went to bed in a lot of pain and Moors took her to Poole Hospital the next morning where her arm was put in a cast.

At the time of the attacks Moors had been serving a suspended prison sentence for an assault on a former girlfriend. On that occasion he broke the victim’s eye socket by punching her, but was spared an immediate jail term.

Miss Collins initially told doctors she broke her arm by falling over the Playstation, but finally went to the police after friends and family encouraged her to.

She later told officers about the bath incident in late 2019.

Moors has been in prison since January this year after he pleaded guilty to causing grievous bodily harm and actual bodily harm.

Judge Brian Forster sentenced him to three years in prison for the two assaults and breaching his suspended sentence order.

The judge told him: ‘It is aggravated by your previous convictions – at the time when these offences were committed you were subject to a suspended sentence.

‘You were clearly given a very good opportunity on that day and have not fulfilled the expectations of the order.

‘Not only did your victim suffer injuries, but also generally lost confidence as a result of what has happened. One can well understand her concern and ongoing worries.’

He also made an indefinite retraining order preventing him from contacting Miss Collins.

Miss Collins has now spoken about her ordeal after seeing Moors sent to jail.

She said: ‘He was quite jealous and possessive a lot of the time. He didn’t even like me having female friends and he belittled me and called me fat.

‘He was always aggressive to me. After he had hit me he would always be very apologetic. In the end the truth only came out because I told someone what had been going on. 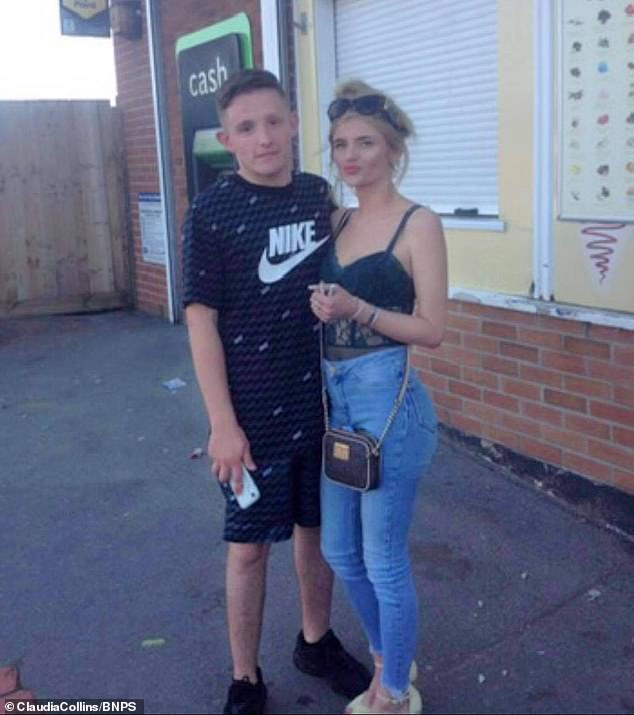 Ryan Moors with Claudia Collins. The pair met through her brother and started a relationship in 2018

‘I don’t think I will ever get over it. I think after all this it’s made me quite an angry person and it’s always in the back of my head, can I trust guys, is it going to happen again?

‘I’m relieved he’s in prison but it doesn’t change the fact my nose is ruined and my arm still aches and is uncomfortable when it’s cold.’

Rose Burns, defending Moors, had said: ‘He gets himself into relationships with vulnerable young girls.’

She added: ‘It leads to a perfect storm with his mental issues. He knows he cannot go on behaving like this, he accepts full responsibility for what has happened.

‘It was a loss of temper, a rage which seizes him. He has developed coping actions such as walking away and punching a wall, unfortunately that did not happen on these two occasions with Claudia Collins.’

Detective Constable Ian Caddy, of Bournemouth CID, said after sentencing: ‘The violence and abuse that Ryan Moors demonstrated toward his then partner is completely unacceptable and we will do all we can to ensure those who commit these kind of despicable offences are held to account.

‘For the victim to come forward and report the matters to police took a huge amount of courage and I want to praise her for the strength and bravery she has shown in coming forward and helping secure a prison term for this dangerous offender.

‘I hope this case sends a clear message that we will support victims of domestic abuse and investigate all reports thoroughly to ensure offenders are brought to justice.’