California officials outlined a far-reaching effort to trace anyone who came into contact with a new coronavirus patient and urged federal officials to move quickly to improve their faulty testing process so the state can protect residents.

Governor Gavin Newsom and state health officials declined to reveal how many people may have crossed paths with the Solano County woman, who is the first person in the United States to develop the new COVID-19 disease without travelling to a virus hotspot or having close contact with someone who did. 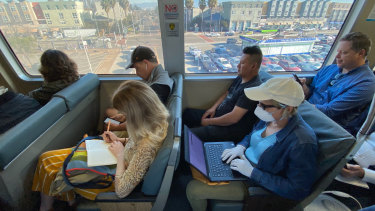 A person wearing a protective mask and gloves rides on a Bay Area Rapid Transit train car during the morning commute in Oakland, CaliforniaCredit:Bloomberg

But they acknowledged the woman was living and working in the community and showing symptoms of the disease before she was admitted to a local hospital here February 15. That is a worrisome prospect because the virus is highly transmissible, especially when someone with the disease has symptoms. They did not share any details about the woman's family, work and social contacts, citing patient privacy.

Newsom, a Democrat, said the federal Centres for Disease Control and Prevention was sending 10 staffers to aid state and local personnel in tracing the woman's contacts.

Mark Ghaly, secretary of the state's Health and Human Services Agency, described a "robust and first-class reaching out to . . . many, many individuals in all walks of this person's life." That includes the people who cared for her at NorthBay VacaValley Hospital, some of whom have been put on paid leave and are now isolated at home monitoring themselves for symptoms, according to hospital official.

Projecting an air of calm during a moment of roiling anxiety over the fast-changing situation, Newsom repeatedly told reporters that the tracing methods employed in Northern California have been honed in response to other public health crises, including outbreaks of tuberculosis and the H1N1, also known as swine flu.

"This is not our first great challenge as it relates to public health," Newsom said. "Quite the contrary. These protocols have been perfected."

At the same time, he called repeatedly for the CDC to expand guidelines that govern who should be tested and dramatically upgrade state and local capacity to test for the virus.

"It can't happen soon enough," Newsom said. "Testing protocols have a been frustration for many of us."

The woman's case is considered the first sign that coronavirus, which has killed more than 2800 people around the world, may be spreading in a US community. 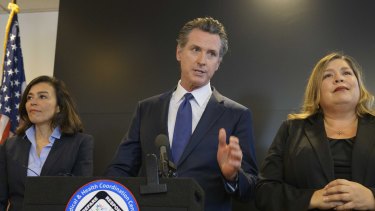 California Governor Gavin Newsom speaks to members of the press at a news conference in Sacramento on Thursday. Credit:AP

Staff members at NorthBay inserted a tube into the woman's lungs to help her breathe, a procedure experts say increases risk of exposure to the virus because it can aerosolise respiratory droplets, according to the person briefed on the case.

When the woman's health continued to decline, Brewer said, she was transferred to UC Davis Medical Centre in Sacramento, which has more capacity and expertise with pulmonary issues. UC Davis officials said she arrived there February 19.

"Community spread" would represent a significant turn for the worse in the battle against the virus. To date, the United States has 60 known cases of the infection, with 59 among people who travelled to Asia or were close contacts of people who went there. Most, 42, picked up the virus while quarantined on the Diamond Princess cruise ship off Japan.

How the woman acquired the respiratory disease COVID-19 is unknown.

"It's possible this could be an instance of community spread of COVID-19, which would be the first time this has happened in the United States," the CDC said in a statement, referring to the disease caused by the coronavirus. The health agency left open the possibility "that the patient may have been exposed to a returned traveller who was infected."

Two UC Davis officials sent an email to employees Wednesday that said the patient arrived at the medical centre February 19 but was not tested until Sunday because the person did not meet the criteria for testing. That includes recent travel to China or close contact with a confirmed case.

The patient arrived from another hospital in Northern California, according to the email send to UC Davis Medical Centre employees from David Lubarsky, vice chancellor of human health sciences, and Brad Simmons, interim chief executive.

UC Davis asked the CDC to conduct a test for the virus because local and state labs were not doing so. "Since the patient did not fit the existing CDC criteria for COVID-19, a test was not immediately administered. UC Davis Health does not control the testing process," they wrote.

The CDC ordered a test Sunday, and additional precautions were taken, they wrote. The agency confirmed the positive test Wednesday.

Kris Concepcion, fire chief and acting public information officer in Vacaville, said county officials had issued a directive not to transport new patients to two local hospitals – NorthBay VacaValley Hospital in Vacaville and NorthBay Medical Centre in nearby Fairfield. Concepcion declined to say why those orders had been given.

Steve Huddleston, vice president of public affairs at NorthBay Healthcare, declined to comment. He said the hospital was directing all inquiries to the California Department of Public Health.

The person briefed on the situation said the ban on new patients lasted through Wednesday night.

Vacaville City Manager Jeremy Craig said he was told by the Solano County Public Health Department not to send patients to NorthBay VacaValley hospital Wednesday but was not given any reason. The city is anxious to know whether there is a coronavirus case in the community.

"We are telling our residents to just take the normal flu precautions," he said. "We don't have any news at this point."

Reached by telephone, Erin Hannigan, chairwoman of the Solano County Board of Supervisors, indicated that the CDC was handling the situation. Asked whether the local government was taking any steps in response to the reported case, she said, "It's one person, so we have to keep it in perspective" and then hung up.

The two hospitals are in Solano County, home to Travis Air Force Base, where hundreds of Americans repatriated from China and others brought home from the Diamond Princess cruise ship have been kept in quarantine. Many of them have been released.

The health department said it has begun tracing people who may have come into contact with the coronavirus-infected individual.

"We have been anticipating the potential for such a case in the US, and given our close familial, social and business relationships with China, it is not unexpected that the first case in the US would be in California," said Sonia Angell, director of the California Department of Public Health and state public health officer.

The virus, which originated in Wuhan, China, has killed 2801 people and sickened more than 82,000 as it has spread around the globe, reaching every continent except Antarctica. The CDC on Tuesday warned Americans that community spread is almost certain to occur, and to prepare for significant disruption in their daily lives.

President Donald Trump on Wednesday evening appointed Vice President Mike Pence as the new head of the task force coordinating the battle against the virus.

What the new coronavirus restrictions mean for Victorians

Venues may welcome crowds back without social distancing in WEEKS

Danai Gurira Pays Touching Tribute to Chadwick Boseman: 'How Do You Honor a King?'