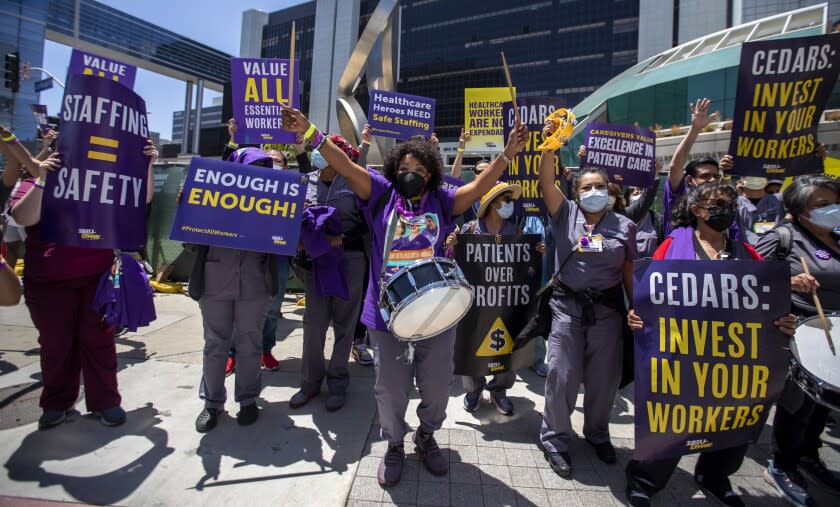 Nearly a thousand workers at the Cedars-Sinai Medical Center started a weeklong strike on Monday for the first time in decades, demanding higher pay and better working conditions amid negotiations for a union contract.

The previous three-year contract between Cedars-Sinai, a nonprofit healthcare organization, and the Service Employees International Union-United Healthcare Workers West expired March 31 and the next round of negotiation is set to take place Tuesday.

SEIU-UHW spokesperson Renée Saldaña said workers had demanded an 8% wage hike during the first year of the new contract, followed by a 6% hike in the two subsequent years, to beat record inflation in the U.S. This is the first workers' strike at Cedars-Sinai since 1979, Saldaña said, and the first one called by the SEIU-UWH.

The union represents about 14% of Cedars-Sinai's 14,000 employees — mainly those who work in maintenance, service and clinical support. SEIU-UHW said it gave management a 10-day notice before going on strike, which is scheduled to end 7 p.m. Friday.

Cedars-Sinai has said the medical center will remain open and fully operational during the strike, and that nurses, physicians and researchers are not part of the union. 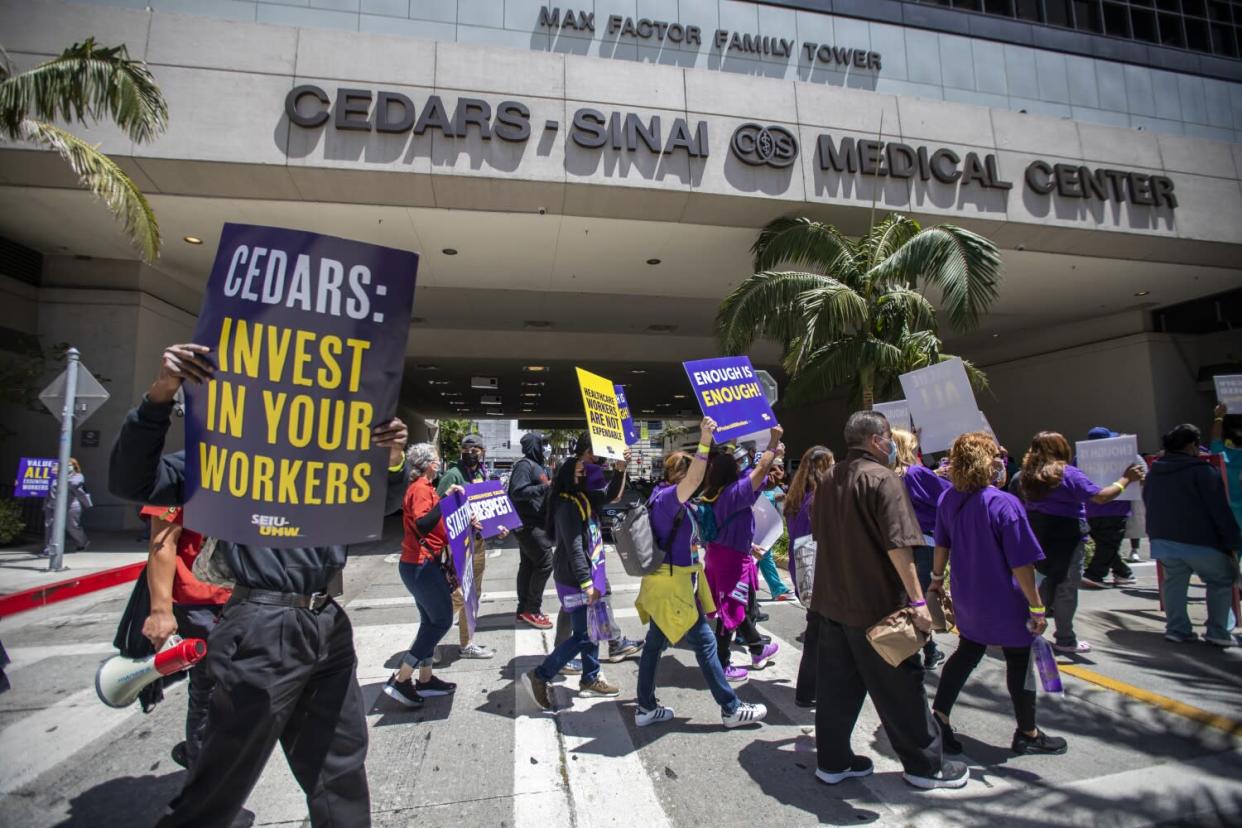 In a statement Sunday, the center'spresident and chief executive, Thomas M. Priselac, said management has been negotiating with the union in good faith “to reach a fair and mutually beneficial agreement for employees."

Healthcare workers at other Southern California facilities, including Kaiser Permanente and USC Norris Comprehensive Cancer Center, have protested what they say are low wages and dangerous work conditions amid a two-year pandemic that has raised the daily risk and stress hospital workers face on the job.

Now, inflation and soaring prices are hitting households and adding to the pressure.

“I have made a lot of sacrifices right from day one when my unit got converted into a COVID ward,” said 61-year-old Yudis Cruz, a clinical partner at Cedars-Sinai.

Cruz said she has seen co-workers pass away, and co-workers lose loved ones who they infected with COVID-19. "My own son got infected by COVID working at the hospital," Cruz said. "We deserve respect, recognition and fair wages to keep up with the high cost of living today.”

Jose Sanchez, a lead transporter, responsible for moving patients and supplies in and across the medical center, said his sister, who also works at Cedars-Sinai, now takes a bus to work rather than her usual drive because gas prices are too high. 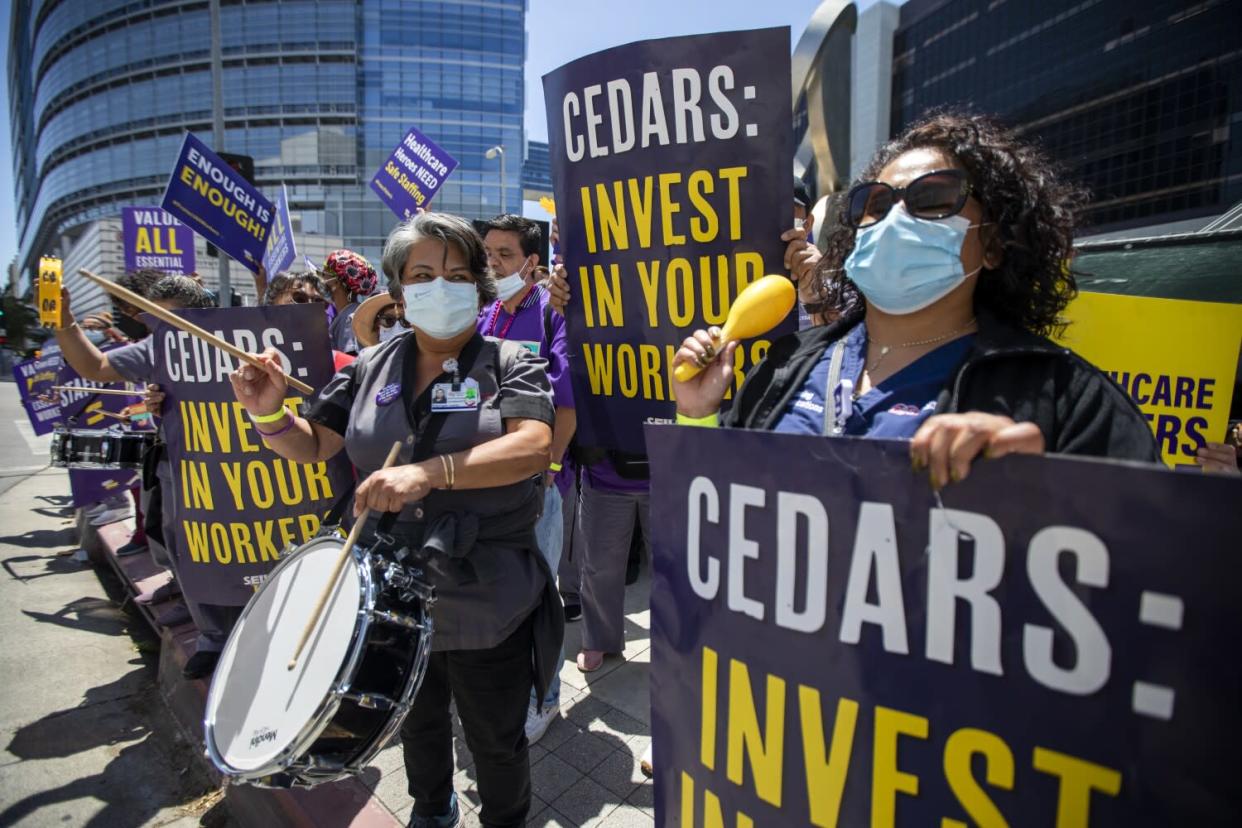 "It’s sad given our levels of wages, which is less than what workers earn at the supermarket,” Sanchez said.

The union and hospital management have not reached agreement on a wage hike formula. Each side accuses the other of not bargaining in good faith.

Priselac said Cedars-Sinai has offered wage increases of 16% over the length of the three-year contract, starting immediately, and that the union broke off negotiations over the weekend without responding to management's latest offer.

In an interview, Cedars-Sinai's chief human resources officer, Andrew Ortiz, said management offered pay hikes according to tiers based on performance and work experience. "We think 16% is a strong offer and we have told the union that we are prepared to make movements to it," Oritz zaid. He said the union is demanding a 46% increase over three years, including a 29% raise in the first year, which he called "unreasonable."

Oritz declined to share the tiered proposal or the median wage hike being offered.

Tom Parker, communications specialist for the SEIU-UHW, said that the union had demanded a more than 40% hikein the minimum wage level, applying only to workers in the lowest rung, to $25 per hour from about $17 per hour.

Union representative Esmie Grubbs said the 16% raise wouldn't apply to all workers, and that most would be getting a much lower wage increase under the formula proposed by management.

The union said in a statement last month that the hospital's workers are asking their employer to stop committing unfair labor practices and to bargain in good faith.

On your way to No10? Sunak breaks cover after lukewarm backing for PM