Dominic Cummings revealed his only regular media contact was the BBC’s Laura Kuenssberg because of the broadcaster’s ‘special position’ in the country.

He took on the handling of the press throughout 2020 because Boris Johnson – his then-boss – was ‘a thousand times far too obsessed with the media, which undermines him doing his job’.

Today, Mr Cummings gave an extraordinary account of the catastrophic response to Covid-19 – revealing that Mr Johnson viewed it as a ‘scare story’ just a month before the first lockdown.

He also described the dramatic moment when a top civil servant admitted: ‘We are absolutely f*****.’

The maverick former No10 chief said the government – and he personally – ‘fell disastrously short’ in its response to coronavirus during a titanic hearing with MPs on coronavirus. 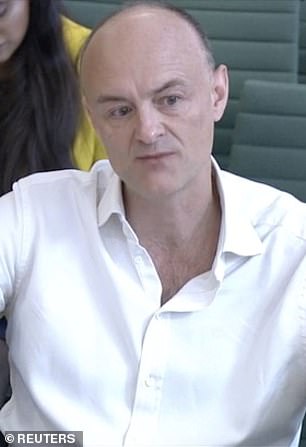 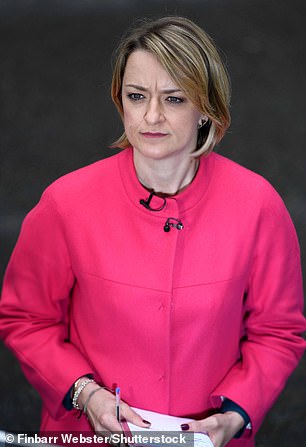 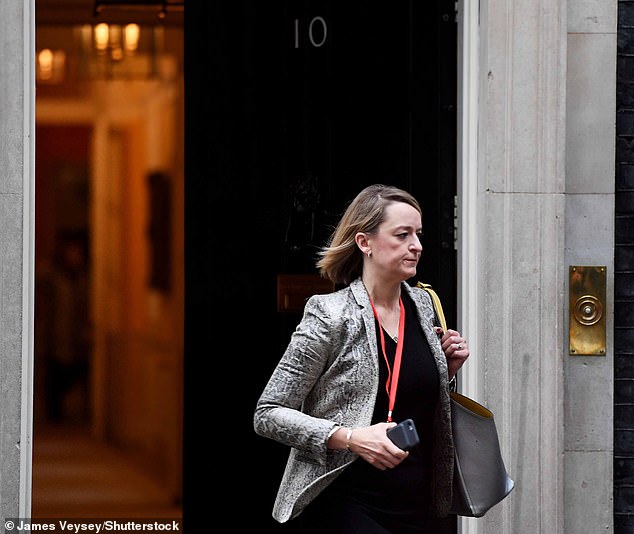 The maverick former No10 chief said the BBC’s political editor (pictured leaving No. 10 in 2019) was the ‘main’ journalist he would speak to – but stressed they would talk once every ‘three or four weeks’ to ‘give guidance on big stories’

The initial apology: ‘The truth is that senior ministers, senior officials, senior advisers like me fell disastrously short of the standards that the public has a right to expect of its Government in a crisis like this. When the public needed us most the Government failed. I would like to say to all the families of those who died unnecessarily how sorry I am for the mistakes that were made and for my own mistakes at that.’

On the lack of preparation in February 2020: ‘We didn’t act like it was important in February, let alone January…. No10 and the government were not working on a war footing in February, it wasn’t until the last week of February there was any sense of urgency.’

On Boris Johnson’s attitude to Covid: ‘In February the Prime Minister regarded this as just a scare story. He described it as the new swine flu… The view of various officials inside No10 was if we have the PM chairing Cobra meetings and he just tells everyone ”it’s swine flu don’t worry about it, I am going to get Chris Whitty to inject me live on TV with coronavirus so everyone realise it’s nothing to be frightened of”, that would not help actual serious planning.’

On No10 in March 2020: ‘It was like a scene from Independence Day with Jeff Goldblum saying the aliens are here and your whole plan is broken and you need a new plan.’

On Boris being distracted by Carrie and Trump: ‘It sounds so surreal couldn’t possibly be true … that day, the Times had run a huge story about the Prime Minister and his girlfriend and their dog. The Prime Minister’s girlfriend was going completely crackers about this story and demanding that the press office deal with that. So we had this sort of completely insane situation in which part of the building was saying are we going to bomb Iraq? Part of the building was arguing about whether or not we’re going to do quarantine or not do quarantine, the Prime Minister has his girlfriend going crackers about something completely trivial.’

On the PM missing Cobra meetings: ‘Lots of Cobra meetings are just going through PowerPoint slides and are not massively useful.’

On Health Secretary Matt Hancock: ‘I think the Secretary of State for Health should’ve been fired for at least 15, 20 things, including lying to everybody on multiple occasions in meeting after meeting in the Cabinet room and publicly. There’s no doubt at all that many senior people performed far, far disastrously below the standards which the country has a right to expect. I think the Secretary of State for Health is certainly one of those people. I said repeatedly to the Prime Minister that he should be fired, so did the Cabinet Secretary, so did many other senior people.’

On herd immunity: ‘It is not that people are thinking this is a good thing, it is that it is a complete inevitability, the only real question is one of timing. It’s either going to be by September or it’s herd immunity by January (2021) after a second peak.’

On not cancelling mass sports events like Cheltenham Festival: ‘The official advice at the time (March 2020)  was that that a) won’t make much difference to transmission, which seems absolutely bizarre in retrospect, the idea that we would keep mass events going on through this whole thing. But also secondly, it could be actively bad because you’d push people into pubs. Of course no one in the official system in the Department of Health drew the obvious logical conclusion which was well, shouldn’t we be shutting all the pubs as well?’

On Government secrecy: ‘There is no doubt at all that the process by which Sage was secret and overall the whole thinking around the strategy was secret was an absolutely catastrophic mistake, because it meant that there wasn’t proper scrutiny of the assumptions, the underlying logic. Actually Sage agreed with this, when I said on March 11 we are going to have to make all these models public and whatnot, there wasn’t pushback from sage or Patrick Vallance either. Patrick actually agreed with me.’

On Boris v Jeremy Corbyn at the 2019 election: ‘There’s so many thousands and thousands of wonderful people in this country who could provide better leadership than either of those two. And there’s obviously something terribly wrong with the political parties if that’s the best that they can do.’

Giving evidence to the Commons health and science committees, the former-adviser said he ‘could give guidance’ to Ms Kuenssberg at the BBC on major stories about the Government’s pandemic handling.

He said the BBC was his outlet of choice due to its ‘special position in the country’, especially ‘during a crisis’.

He said: ‘I was working roughly 100 hour weeks. At that time for less than an hour a week, much less than one percent was spent talking to the media.

‘I did occasionally talk to people, the main person I spoke to in the whole of 2020 was Laura Kuenssberg at the BBC.

‘Because the BBC has a special position in the country, obviously during a crisis.

‘Because I was in the room for certain crucial things, I could give guidance to her for certain big stories.’

He added: ‘I spoke to her on average maybe once every three or four weeks through the course of the year.

‘I did talk to people unauthorised in the sense of pretty rarely did I speak to the Prime Minister about it before I spoke to any journalists.  I just got on with it.’

He claimed his lack of contact ‘drove the media mad’ because no-one in his position had done that in ‘decades’.

Also in his four-hour evidence given today, Mr Cummings conceded he should have been ‘hitting the panic button’ in mid-February but he had been ‘wrongly reassured’ by messages from the WHO and others about the situation in China.

The government was certainly not on a ‘war footing’ at the time, with senior figures including Mr Johnson himself going on holiday.

‘Lots of key people were literally skiing in mid-February,’ he said.

He said Mr Johnson regarded the pandemic as a ‘scare story’ and the ‘new Swine Flu’ at that stage, and had even suggested he could be injected with the disease live on TV by medical chief Chris Whitty to show people it was not a threat.

In a detailed timeline, Mr Cummings said that on March 12 at 7.48am he texted the PM and said the Cabinet Office was ‘terrifyingly sh**’ and Covid restrictions should be stepped up immediately.

However, on the same day Donald Trump was trying to persuade the UK to join a bombing raid in the Middle East.

And Carrie Symonds was ‘going crackers’ at the PM over a ‘trivial’ story in the papers about their dog Dilyn.

Mr Cummings said on the evening of March 13 the second most senior civil servant at the Cabinet Office, Helen MacNamara, came in and relayed to him the view of another senior official that ‘there is no plan’ and ‘we’re in huge trouble’.

Mr Cummings said she told him: ‘I think we are absolutely f*****’ and warned that ‘thousands’ of people could die.

Despite the rising alarm, at around the same time there were still meetings going on with officials suggesting people should be advised to have ‘chicken pox parties’ to spread the virus more quickly.

Mr Johnson tried to shrug off the vicious onslaught at a bruising PMQs this afternoon, denying the government was ‘complacent’.

‘None of the decisions have been easy,’ the premier said. ‘To go into a lockdown is a traumatic thing for a county. We have at every stage tried to minimise loss of life.’

But the committee heard hours of damaging allegations, including that even in the first half of March Mr Johnson was still of the view that the threat to the economy was more significant than the public health risk.

Mr Cummings said the scenes were reminiscent of disaster movie Independence Day, where star Jeff Goldblum says the plan to resist the alien invasion has failed and there needs to be a new one.

The former aide also launched an excoriating attack on Matt Hancock, accusing him of ‘lying’ about PPE and access for treatment for those suffering from the disease.

He insisted the Health Secretary told ministers ‘categorically’ in March that people would be tested for Covid before being returned to care homes, but it later transpired that it not happened.

‘We sent people with Covid back to the care homes,’ he said.

He claimed that the then-Cabinet Secretary Mark Sedwill told him he had ‘lost confidence’ in Mr Hancock’s ‘honesty’ during key meetings.

Mr Cummings said he went to Mr Johnson in July last year and said that he was going to leave because Downing Street was in ‘chaos’.

He said he told the PM that he was ‘not prepared to work with people like Hancock any more’, accusing Mr Johnson of being ‘frightened’ to give him enough power to set up a functional system.

The former Vote Leave chief said Mr Johnson retorted that ‘chaos isn’t that bad’ because it ‘means everyone has to look to me to see who is in charge’.

Mr Cummings revealed that neither he nor Mr Johnson attended Cobra meetings in the early stages, and he did not advise the PM to do so.

He said the sessions were often just ‘powerpoint presentations’ and ‘not massively useful’ and there were many leaks.

‘In February the Prime Minister regarded this as just a scare story, he described it as the new swine flu,’ Mr Cummings said. 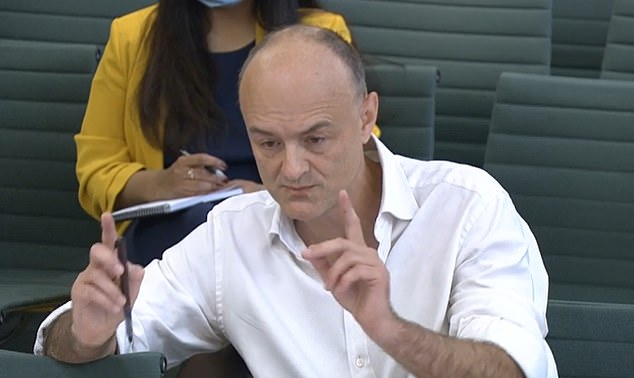 When asked if he had told the PM it was not, Mr Cummings added: ‘Certainly, but the view of various officials inside Number 10 was if we have the Prime Minister chairing Cobra meetings and he just tells everyone ”it’s swine flu, don’t worry about it, I’m going to get Chris Whitty to inject me live on TV with coronavirus so everyone realises it’s nothing to be frightened of”, that would not help actually serious panic.’

In a damning assessment, Mr Cummings said: ‘The truth is that senior ministers, senior officials, senior advisers like me fell disastrously short of the standards that the public has a right to expect of its Government in a crisis like this.

‘When the public needed us most the Government failed. 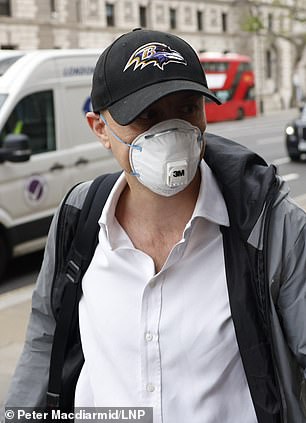 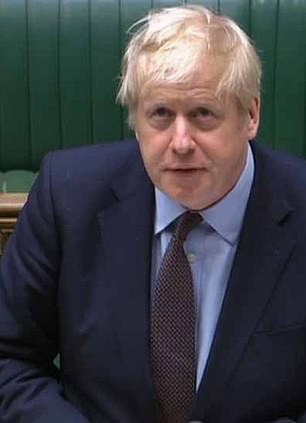 ‘I would like to say to all the families of those who died unnecessarily how sorry I am for the mistakes that were made and for my own mistakes at that.’

Mr Cummings accused Matt Hancock and other officials of briefing at the time that the strategy was to reach ‘herd immunity’, which was seen as an ‘unavoidable fact’.

He insisted it is ‘completely wrong’ that the government is now denying it was their aim.

1-Year-Old Shot in Head by Police ;Fighting for His Life'