Washington: Images of the night sky capture little more than a white dot zipping across gray static. Without the helpful green circle, it's easy to miss. 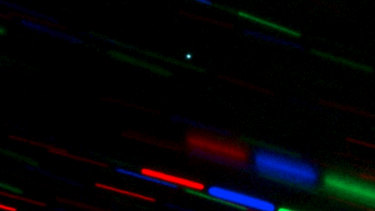 Image of a very small object in orbit around the Earth, thought to be only a few meters across, made by astronomers at the international Gemini Observatory, on Hawaii’s Mauna Kea Island.Credit:Gemini Observatory/Twitter

But two astronomers soon recognised the speck on their screens as something special: a likely "mini-moon" caught orbiting the Earth, only the second ever recorded.

With close to a million known asteroids – rubble from the birth of our solar system – but hardly any spotted circling our planet, this roughly compact-car-sized object is "a big deal," tweeted Kacper Wierzchos, one of the people who made the discovery.

Astronomers expect mini-moon sightings to grow far more common as a new, giant telescope going up in Chile starts scanning the sky. It's an exciting prospect for scientists interested in some day sending a spacecraft to study one of the rocks and maybe even bring it back to Earth.

"These asteroids are what built the planets," Scott Sheppard, an astronomer at the Carnegie Institution for Science, said. "And if these things are in orbit of Earth, they're very easy for us to get to."

There's no time to plan such a visit to 2020 CD3, the mini-moon discovered this month by staff of a NASA-funded, Arizona-based project called the Catalina Sky Survey (CSS). The object is already getting fainter, and next month it will slip away from the Earth's gravity to join other asteroids hurtling around the Sun, said Eric Christensen, who directs the CSS.

"It's likely coming to pay us another visit in another 25 or 50 years," Christensen said.

Hosted in Tuscon by the University of Arizona, the CSS is devoted to tracking "near-Earth objects." Worried about asteroids that could hit the Earth and do serious damage, lawmakers have set a goal of cataloguing at least 90 percent of these near-Earth objects above a certain size.

An automated system at CSS collects pictures throughout the night and then tries to spot moving objects, Christensen explained. Then astronomers take a look and decide which ones they should report.

The images the project captured of the mini-moon on the night of February 15 look a lot like any other asteroid streaking across the sky, he added. It wasn't until the next day that staff decided they probably had an object temporarily "captured" by Earth.

They still have questions.

Exactly what the object is made of is not yet clear, researchers say. They also aren't totally sure how long 2020 CD3 has been orbiting us. It's at least a year, maybe a few.

More data would help them be extra-sure they have the second recorded mini-moon, Christensen said. But the astronomers are fairly confident they have a hunk of rock – and thus a moonlet – rather than man-made space junk. Their find seems too heavy to be some artificial castoff, Christensen says.

The Catalina Sky Survey also discovered the one other mini-moon on record, in 2006. That object is expected to come back in 2028.

"Finding a second one demonstrates that yes, there are multiple . . . the first one was not a fluke," said Christensen.

Some researchers think we could start finding several mini-moons a year when the Vera Rubin Observatory starts operations in 2022 atop a Chilean mountain. That new observatory will spend its first decade making an "unprecedented" survey of the visible sky, the National Science Foundation says.

For now, scientists say, the mini-moons are hard to spot. 2020 CD3 is already getting too faint for the Catalina Sky Survey to pick it up.

"I think it's highly likely that this has been observed before, but that it's been mistaken for an artificial satellite," said Matthew Holman, director of the Cambridge, Massachusetts-based Minor Planet Centre. "That's the much more common thing, if you're looking for something that's in orbit around the Earth."

Asteroids become mini-moons by "being in the right place at the right time," said Sheppard, the Carnegie Institute astronomer. They approach the Earth at just the right velocity to find themselves pulled into a typically chaotic orbit that's also influenced by the moon and the Sun.

Sometimes, researchers said, 2020 CD3 was flung several times further away from Earth than our normal moon. Other times, it came within a few tens of thousands of kilometres.

To stay in orbit for good, mini-moons would need to somehow have a bit of their energy zapped away, Sheppard said. So however many are out there without our knowledge, they're all fleeting.