The Advertising Standards Authority (ASA) said the ‘scaremongering’ adverts went against Public Health England guidance about the use of face masks to prevent the spread of deadly infection.

The adverts, which appeared on Amazon and on the Scottish Sun website, were ruled in breach of ASA code and the offending firms, Novads OU and Easy Shopping 4 Home Ltd, were ordered not to repeat the claims.

The regulator stated that the adverts were ‘misleading, irresponsible and likely to cause fear without justifiable reason’. 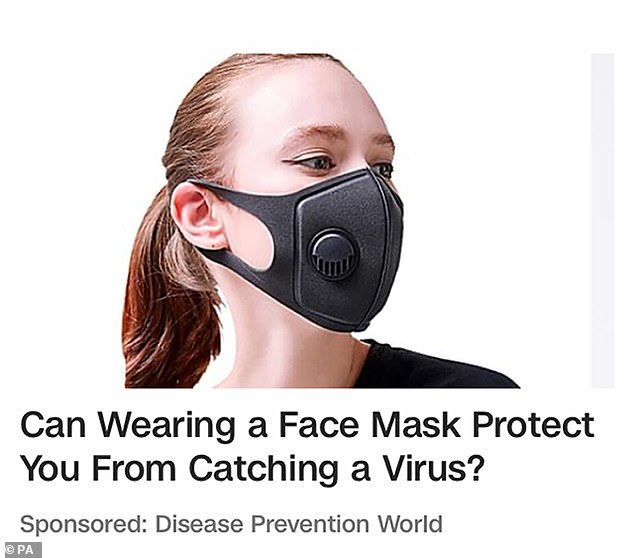 The adverts which appeared on Amazon and on the Scottish Sun website, were ruled in breach of ASA code and the advertisers were ordered not to repeat the claims

One of the Oxybreath Pro adverts stated: ‘It would be an understatement to say that there is a growing sense of panic.

‘The best advice I’ve heard is to stay calm and take practical measures to protect yourself.

‘One of the best ways to protect yourself is to get a high quality face mask that can protect you from: viruses, bacteria, and other air pollutants.’

A spokesman for the ASA said: ‘Our rules require that UK ads are truthful and responsible.

‘The ads were misleading because the claims went against advice offered by the public health authority and irresponsible because they were alarmist and played on people’s fears.

‘During our investigation we sought advice from Public Health England (PHE).

‘They informed us that they do not recommend the use of face masks as a means of protection from coronavirus. 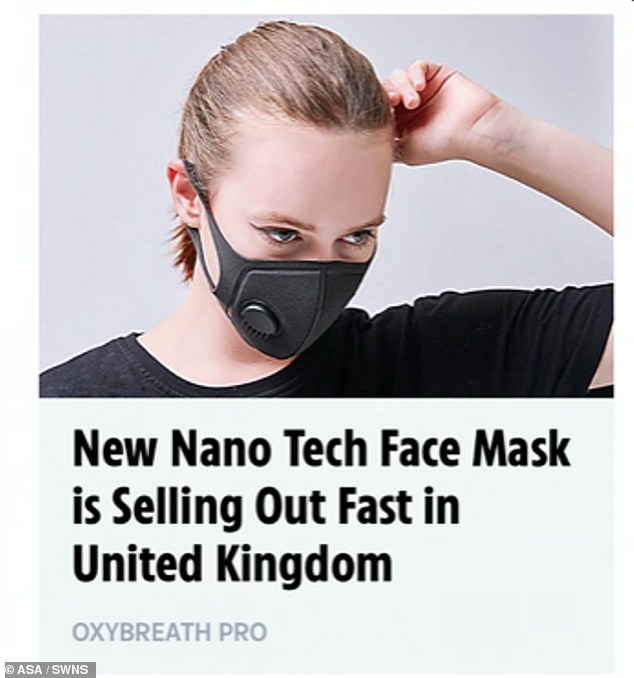 ‘Furthermore, we understood there was very little evidence of widespread benefit from their use outside of clinical settings, and that prolonged use of masks was likely to reduce compliance with good universal hygiene behaviours that are recommended to help stop the spread of infectious diseases (including coronavirus), such as frequent hand-washing and avoiding touching the eyes, nose and mouth with unwashed hands.

‘Beyond this, we recommend consumers get their information about coronavirus from trusted news outlets and follow the latest Government advice.’

Professor Stephen Powis, NHS medical director, said: ‘Callous firms looking to maximise profits by pushing products that fly in the face of official advice is outright dangerous and has rightly been banned.

‘As the country mobilises to deal with this outbreak we need responsible firms to play their part by thinking about how more employees could work from home, encouraging them to follow simple hygiene measures such as washing their hands, covering their mouth and nose when they cough or sneeze, and making sure they know that anyone who is worried consults NHS 111 online.’