Families were given advice on how to pronounce a death themselves if medics were not available during the height of the coronavirus pandemic, outraging coroners.

The Government says a relative could ‘verify’ the death of a loved one in their own home with the help of a GP on the phone.

It links to emergency guidance drawn up by the British Medical Association (BMA) and Royal College of General Practitioners, which explains how someone without medical training can check a person has died.

A checklist asks if the body is stiff and if light has gone from the eyes using a mobile phone torch. If the person is classified as dead, the undertakers can be contacted.

The document was hoped to ‘speed up’ the process of verifying deaths when services were overwhelmed and avoid calling doctors from the frontline.

But coroners blasted the advice and said it was ‘inappropriate for a person who is not suitably trained to recognise death’.

They warned it could lead to families reporting that patients were dead when they were still alive because their breathing was very shallow. 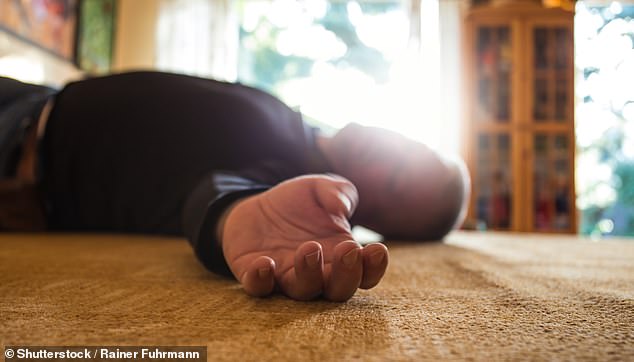 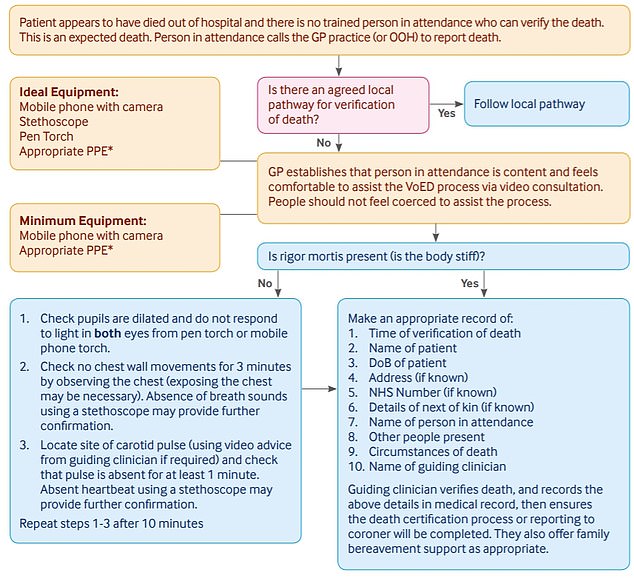 A checklist, drawn up by the British Medical Association (BMA) and Royal College of General Practitioners, asks if the body is stiff and if light has gone from the eyes using a mobile phone torch. If the person is classified as dead, the undertakers can be contacted

There are four processes to go through when someone dies, the first of which is ‘verification of death’.

There is no law which says only a doctor or trained professional, such as a paramedic must verify the death of someone.

Anyone who is ‘competent’ is allowed, but there has been debate over what this means, especially during the pandemic.

Since the Coronavirus Act 2020 was passed, emergency legislation means anyone can pronounce a death if they feel comfortable to.

The relaxation of rules – which has been faced with criticism – means care workers and family members can verify a death outside of hospital without a doctor present.

‘This helps avoid long delays in waiting for verification before the deceased person can be moved when medical practitioners are unavailable, which can be distressing for their families and those close to them,’ Government guidance from May 5 says.

The Department of Health and Social Care endorse a set of guidelines drawn up by the BMA and RCOGPs, which say there is no need for a GP to be present for the verification of a death.

It says anyone who is present at an ‘expected death’ can take it upon themselves to check the deceased while on the phone to a GP if they are comfortable with it.

The document, designed mostly to support care workers, asks: ‘Is rigor mortis present (is the body stiff)?’ – if yes, the person notes down the time.

If no, the person has to carry out three more checks. They are told: ‘Check pupils are dilated and do not respond to light in both eyes from mobile phone torch.

‘Check no chest wall movements for three minutes by observing the chest (exposing the chest may be necessary).

‘Locate site of cartoid pulse (using video advice from guiding clinician if required) and check that pulse is absent for at least one minute.

The process must be repeated after ten minutes to confirm a death before funeral directors are contacted.

The Department of Health and Social Care endorse a set of guidelines drawn up by the BMA and RCOGPs. It says non-medical professionals – which includes family members – can verify a death if they feel comfortable to while on the phone to a GP

The document said: ‘During the COVID-19 pandemic the processes in relation to death registration have been changing to… minimise delays and distress for families and to protect public health.

Families across England will finally be able to see their elderly relatives again tomorrow, as millions of vulnerable people ‘shielding’ are allowed to spend time outdoors.

Some groups of people are considered to be at extremely high risk of severe illness with coronavirus and had been asked to strictly follow shielding measures.

According to NHS Inform, this ‘extremely clinically vulnerable’ group includes people who have specific cancers, are organ transplant recipients, are on immunosuppressant drugs, or have severe chest conditions such as cystic fibrosis, severe asthma and severe COPD.

Boris Johnson last night hailed the ‘resilience’ of those who have been shielding since March, with many having no face-to-face contact since the beginning of the coronavirus pandemic.

The Prime Minister said: ‘I want to thank everyone who has followed the shielding guidance – it is because of your patience and sacrifice that thousands of lives have been saved. I do not underestimate just how difficult it has been for you, staying at home for the last ten weeks, and I want to pay tribute to your resilience.’

The announcement came alongside a relaxing of rules to allow groups of up to six people from different households to exercise together from tomorrow.

But four members of the Government’s Scientific Advisory Group on Emergencies (Sage) have criticised the moves, saying they are coming too soon and risk worsening the pandemic.

‘This guidance is designed to provide remote support by people (such as care workers) who have not had training in verifying death so that the verification process can be completed by a clinician safely and speedily.

‘If relatives/friends of the deceased wish to support the process before the undertaker arrives, care needs to be taken to ensure this is appropriate and conducted sensitively – no person should be asked to do anything they are uncomfortable with.’

But the guidelines, also endorsed by the Care Quality Commission, were slammed by eight London coroners as inappropriate.

In a letter to the BMA dated April 14, they said: ‘We do not consider that it is an acceptable position for untrained funeral directors or family members to verify life extinct.

‘Diagnosis of death is a clinical one undertaken by a competent adult with the appropriate skills and training.

‘It is, in our view, inappropriate for a person who is not suitably trained to recognise death.’

The coroners warned a person who does not have medical training may wrongly announce a death when someone is actually still alive.

They even claimed that it could lead to families reporting that patients were dead when they were still alive.

They wrote: ‘There are some clinical conditions whereby patients are deeply unconscious, with very shallow irregular respirations.

‘The checks set out in the guidance may fail to correctly diagnose these patients.’

The coroners also disagree with separate protocols drawn up by LMCs (local medical services). Guidance to GPs in London reportedly say: ‘Anyone can verify death. Absolutely anyone. There is no need for any special training despite what some may say.’

Dr Bharat Pankhania, a senior clinical lecturer at Exeter University, said the guidance is devoid of any emotion.

He told The Sun: ‘[It] does sound very distressing. The language used is stark and clinical and devoid of emotion, maybe it should be communicated in a softer, gentler way.’

A district nurse added: ‘Families are already grief-stricken and now in some cases they are being asked to verify the death because some doctors don’t want to come out (to the home) as they are worried about coronavirus.

‘Imagine being asked to make these checks. It doesn’t bear thinking about.’

Dr Rosie Benneyworth, of the CQC, admitted the process can be ’emotionally testing’ for someone who has not done it before.

But the BMA responded to the London coroners and said their stance was ‘disappointing in the extreme’ and in opposition to other coroners.

It could indirectly cause excess deaths because doctors would be unnecessarily pulled away from the coronavirus frontline.

If community services fail, the letter said, ‘hospitals will be flooded and quickly overwhelmed’, which will ‘result in excess deaths’.

‘Our workforce is severely limited, hence the need for government to bring back into harness thousands of retired doctors.’

What was the I Have A Dream speech by Martin Luther King, what date did he give the speech on and what are his most famous quotes?

'90 Day Fiancé': Syngin Colchester Tells Fans He Has 'No Obligation To Anybody' — Did He and Tania Finally Call It Quits?

Pele snubs Messi and insists Cristiano Ronaldo is best in the world.. but insists HE is the greatest in history – The Sun

Miguel Cervantes on Returning to Broadway 5 Months After Daughter's Death: It's 'Upside Down'