‘I’m innocent’: Father who was pepper-sprayed by police after refusing to wear a mask on train claims he is exempt from the rules because he suffers from panic attacks

A rail passenger who was pepper sprayed after resisting arrest for refusing to wear a face mask on a train has protested his innocence and insisted he is exempt due to his panic attacks.

Shocking footage emerged earlier this week of the clash between Anthony Baldwin, 34, and the lone officer on a Wirral line service at Lime Street Station in Liverpool.

The video shows the officer telling him to wear a mask, only for him to counter, saying he does not have to wear one due to a ‘medical condition’.

Passengers on public transport in England are required by law to wear a mask, or face a £100 fine, unless they have a medical condition which prevents them from wearing a mask.

Now, the father-of-five has lifted the lid further on the incident, and accused British Transport Police of a ‘heavy-handed’ approach.

He told the Sun: ‘I’ve got severe anxiety. In the video the police pull my top over my head and you can actually hear me screaming.

‘I was panicking and I had a panic attack in the back of the police van and they just kept laughing at me.’ 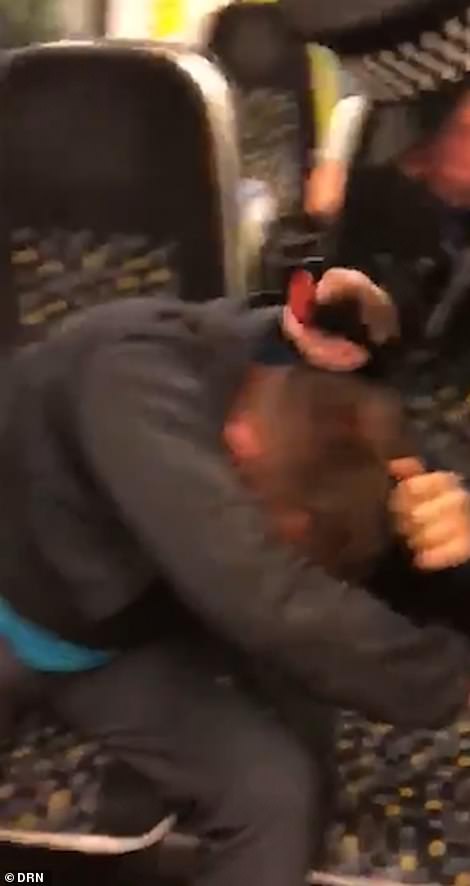 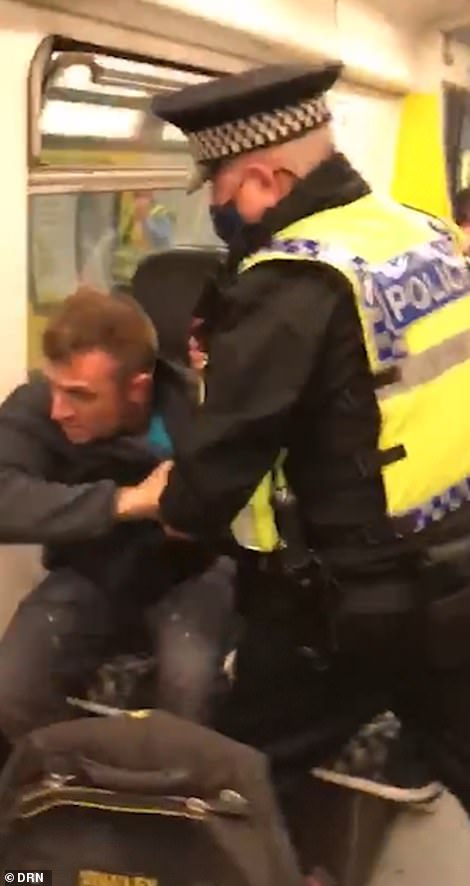 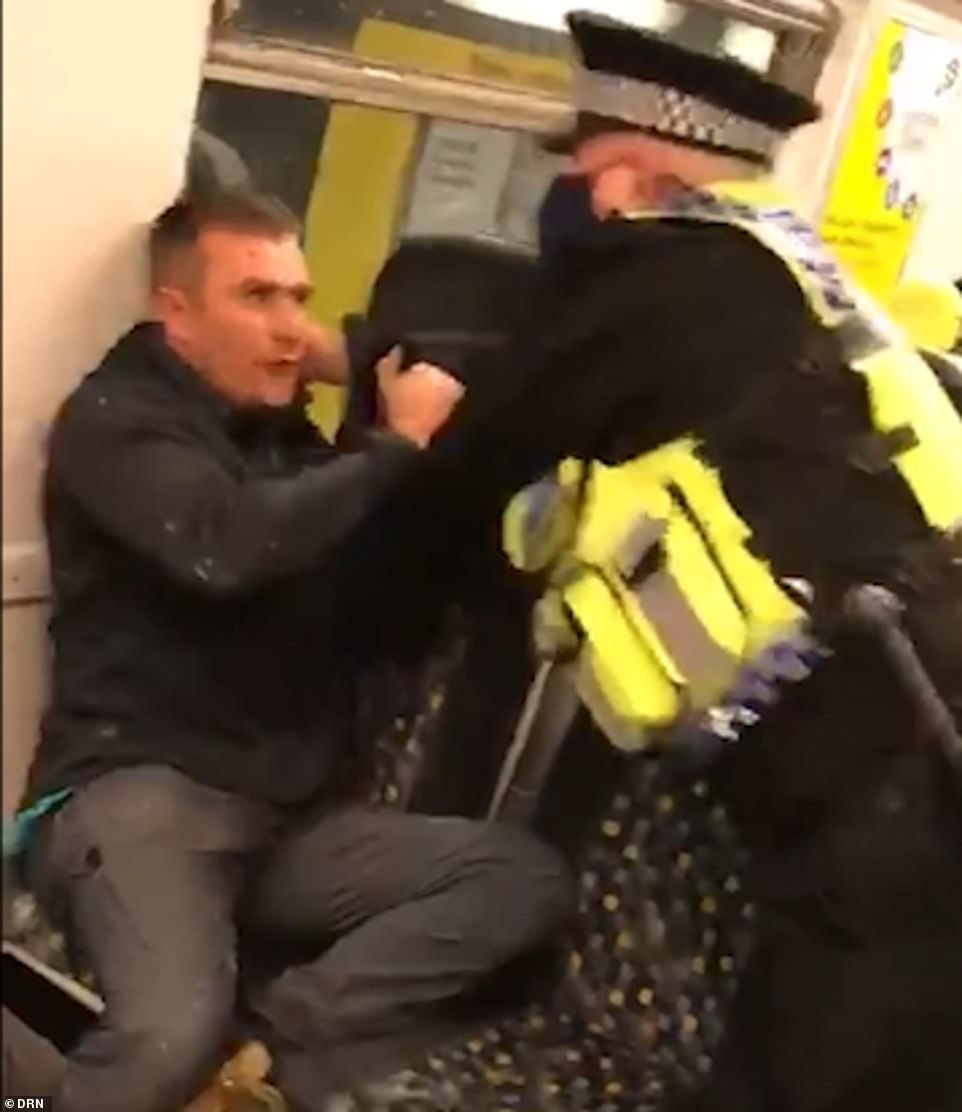 As the officer takes hold of the passenger’s arm, the man resists fiercely and shouts: ‘Yo, who the f*** do you think you’re grabbing?’

What are the rules for face masks on public transport in England and Scotland?

In both England and Scotland face coverings are mandatory on all public transport, including buses, coaches, trams, ferries, aircraft and trains.

In addition, some operators have amended their conditions of carriage, allowing them to enforce the requirement in a similar way to the rules on having a ticket for travel, meaning they can implement the changes in the way that works best for them.

Under the rules, operators are able to stop passengers who refuse to follow the rules from travelling and direct them to leave services.

In England, the police and Transport for London authorised personnel are also be able to issue fixed penalty notices of £100, or £50 if paid in 14 days.

Repeat offenders receiving fines on public transport or in an indoor setting will have their fines doubled at each offence.

There are a number of exemptions, such as on medical grounds, as well as for young children.

The roofer insisted he takes medication for anxiety and has suffered panic attacks since the death of his father five years ago, adding that the video doesn’t how how he tried to explain this to an officer initially.

Mr Baldwin also denied coughing on fellow passengers after BTP said that was the reason for the call to the train.

The British Transport Police officer continues to insist the man puts on a mask or leave the train, but the man refuses sparking a violent tussle.

The officer gives the man his final warning before telling him: ‘You’re getting off.’

He takes hold of the passenger’s arm, the man resists fiercely and shouts: ‘Yo, who the f*** do you think you’re grabbing?’

The officer tries to remove him by force but the man refuses to budge and blasts: ‘I’ve told you no. Now get off me.’

The office then replies: ‘Off the train, or I’ll get you locked up.’

He wrestles with the officer – who threatens to pepper spray him – as fellow passengers protest: ‘He’s done nothing wrong. Medical condition.’

The officer then attempts to spray the unruly passenger – who desperately shields his face – but is unable to get a clear shot and urgently calls for backup on his radio.

The passenger continues to resist arrest and shoves the officer back, shouting: ‘I’ve already told you why I don’t have to f****** wear one. Now f*** off.’

As more officers rush to help, the man’s friends accuse the officer of abusing his power and call him a ‘bully’.

Undeterred, he manages to cuff one of the suspect’s wrists and pepper sprays him.

In the ensuing struggle, the man’s shirt comes off.

When backup finally arrives, several officers are seen struggling to get the man in handcuffs, as he screams: ‘This is the reason why I don’t wear my mask.’

He is finally subdued and led off the train, as other passengers – furious at his removal – demand to know the name of the arresting officer.

A spokesperson for British Transport Police said today: ‘A man has been charged with threatening behaviour and assaulting a police officer on a Merseyrail train to Liverpool Lime Street station.

‘The incident happened at around 3.20pm on Wednesday, September 2. Officers had responded to a report of a man coughing at two passengers.’

The man is due to appear in court in January 2021, the spokesperson added. The BTP said that while pepper spray was used during the incident, the man was not hit with the liquid.

Police officers are allowed to use pepper spray by officers faced with violence or under the threat of violence, under guidance from the National Police Chiefs’ Council (NPCC). 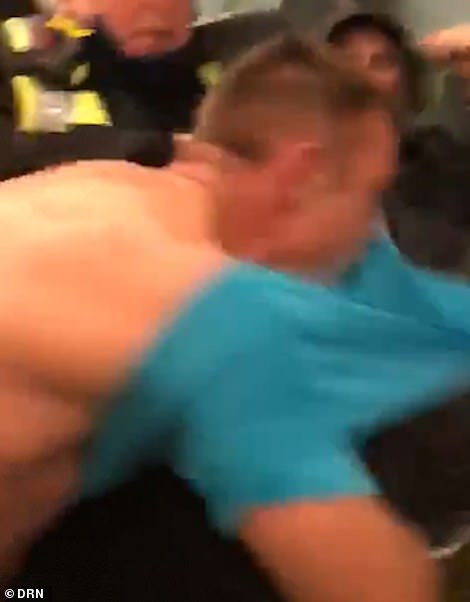 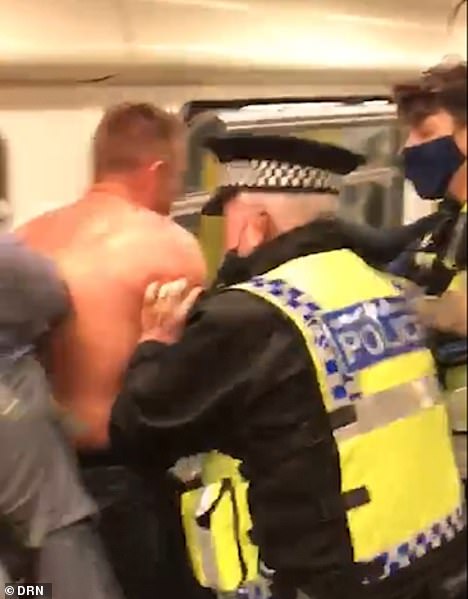 During the scuffle the man takes off his shirt. Other officers are seen rushing to the scene to help the lone British Transport Police officer 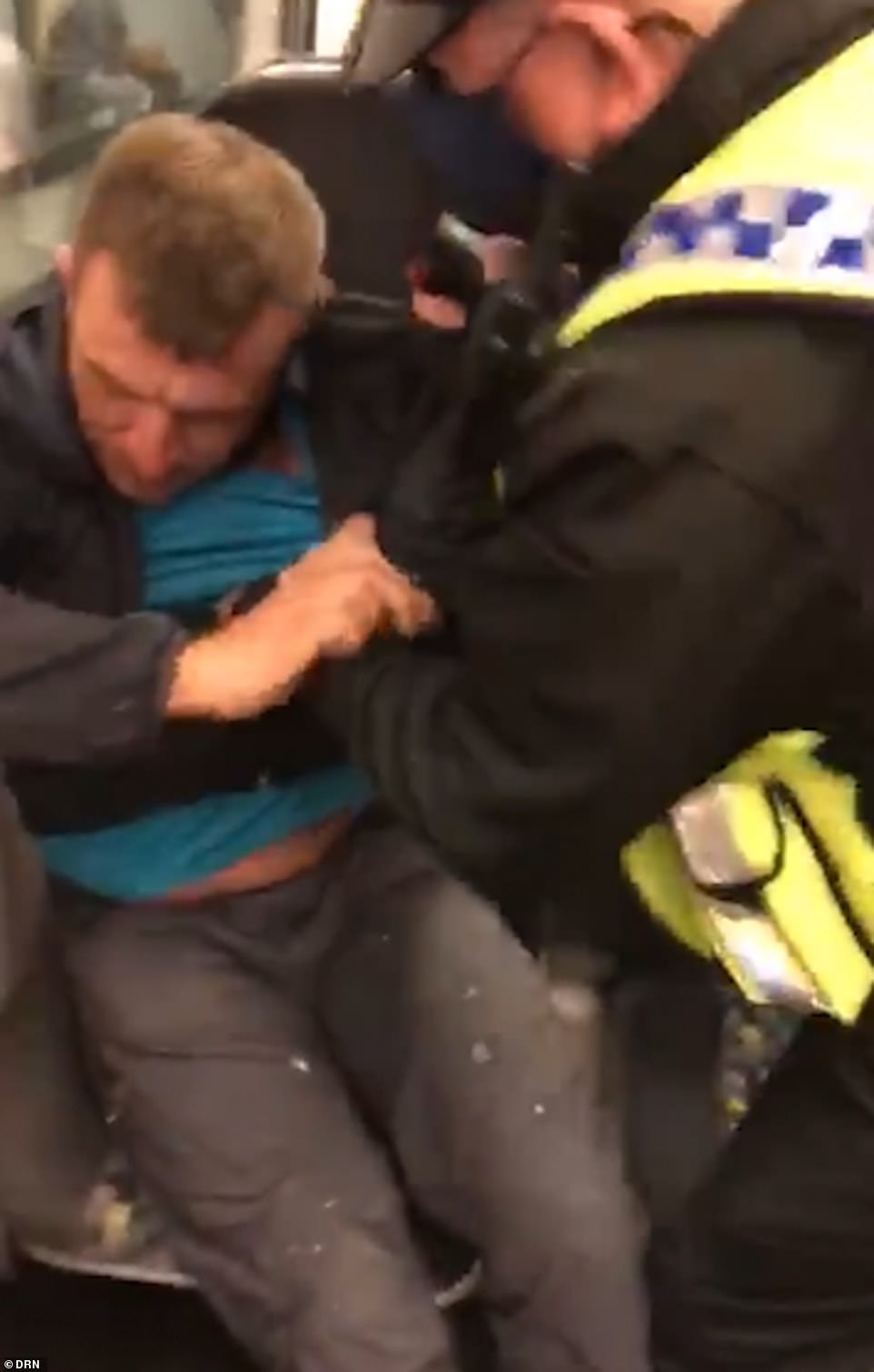 He is finally subdued and led off the train, as other passengers – furious at his removal – demand to know the name of the arresting officer.

Who is exempt from having to wear a face mask on public transport?

In places where face coverings are required in England, such as public transport, there are some circumstances where people may not be able to wear a face covering. These include:

– Children under the age of 11

– People who cannot put on, wear or remove a face covering because of a physical or mental illness or impairment, or disability

– Where putting on, wearing or removing a face covering will cause you severe distress

– If you are speaking to or providing assistance to someone who relies on lip reading, clear sound or facial expressions to communicate

– To avoid harm or injury, or the risk of harm or injury, to yourself or others – including if it would negatively impact on your ability to exercise or participate in a strenuous activity

However, they say some people may feel more comfortable showing something that says they do not have to wear a face covering.

The latest incident involving face masks on public transport comes after police this week removed a ‘disruptive’ passenger from an easyJet flight after he refused to wear a face mask.

One officer is seen to approach a row of seated passengers before saying: ‘Hi folks, are you ready to go?’

The officer then asks the passenger to grab their bags before a man, seen wearing a blue face mask, then walks to the front of the plane.

The footage then shows a woman being show off the plane with the officers following.

EasyJet said the man had refused to wear a face mask and had been ‘disruptive’.

Meanwhile, Police Scotland say the man has been given a recorded warning.

The incident comes days after a suspected Covid-infected passenger was dragged off a plane by Hazmat-suited medics.

The passenger showed ‘no symptoms’ and received a text only seconds before take-off ‘saying he was positive’, a fellow flyer has claimed.

The Ryanair flight was allowed to make its journey from Stansted to Italy after the dramatic incident, which saw no other travellers asked to self-isolate on arrival, according to Fionn Murphy, from west London.

The 21-year-old, who spoke previously of his shock that he was able to complete the trip to Pisa, where he could be unknowingly walking around with coronavirus.

The passenger revealed how the plane was seconds from take off after reversing, ready to taxi to the runway before the dramatic intervention.

He told the Sun: ‘The doors were shut, we were ready to fly… it was literally last minute.’

‘I got up and walked towards the back of the plane to grab one of the empty seats back there and the air hostess told me to sit down as we were just about to take off. And then everything stopped.’ 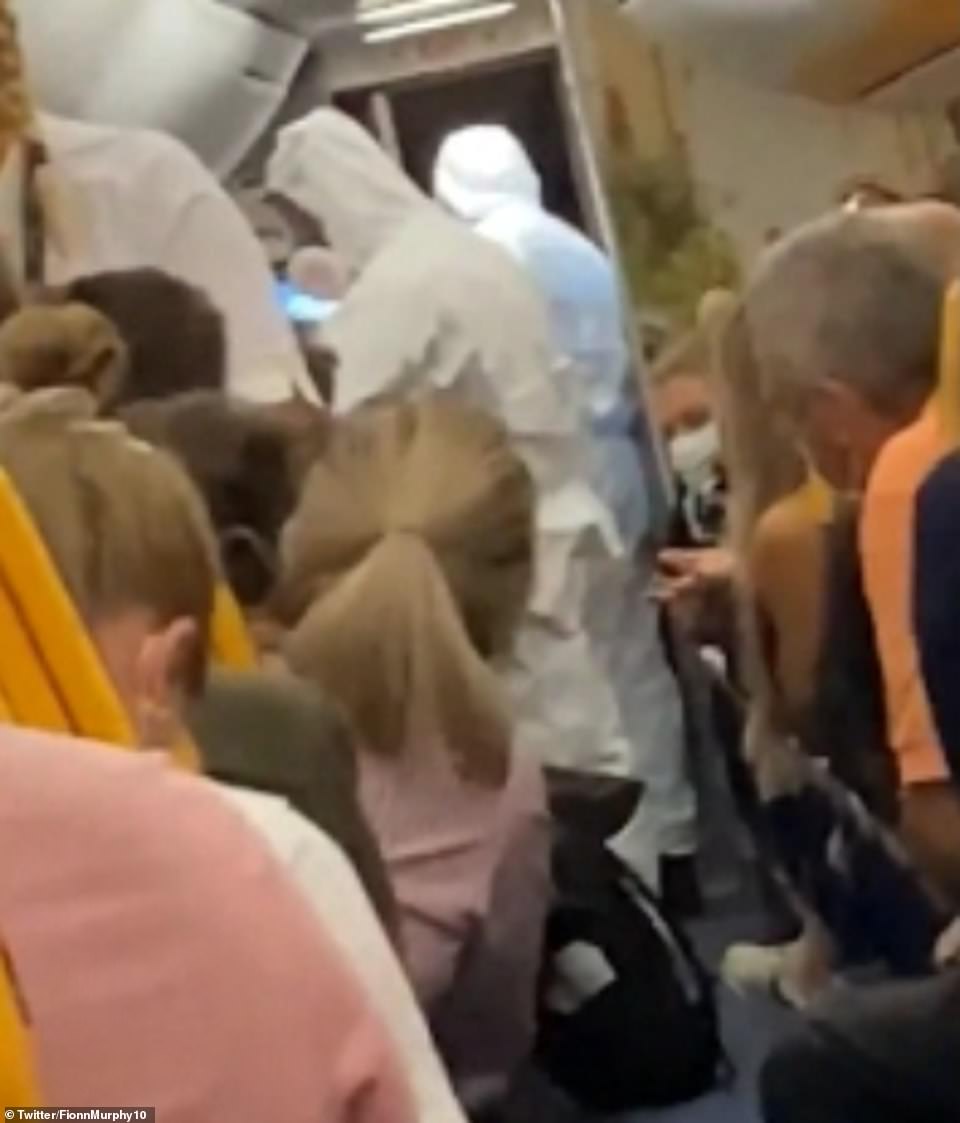 Hazmat-clad officials boarded a plane in London Stansted after a passenger received a text from track-and-trace minutes before take off. The flight was bound for Pisa

‘At first I thought it may have been because of the result of a temperature check, but I didn’t remember there being any.’

The allegedly infected person and his travel companion were taken off the aircraft and moved to the airport’s isolation area, where they were met by health authorities.

Do you know who was involved in the train incident?

Do you know who was involved in the train incident?: Contact us at [email protected]

Their seats and the overhead cabin were disinfected before the plane was allowed to fly to Pisa an hour and 40 minutes behind schedule, according to Flight Radar.

The passenger, who has not been named, breached coronavirus quarantine restrictions by leaving their home and boarding the flight.

Last month a fight broke out on a KLM flight from Amsterdam to Ibiza after two passengers refused to wear face masks.

The government imposed its mandatory face covering rules on June 15.

In addition, some operators have amended their conditions of carriage, allowing them to enforce the requirement in a similar way to the rules on having a ticket for travel, meaning they can implement the changes in the way that works best for them.

Under the rules, operators are able to stop passengers who refuse to follow the rules from travelling and direct them to leave services.

In England, the police and Transport for London authorised personnel are also be able to issue fixed penalty notices of £100, or £50 if paid in 14 days.

Repeat offenders receiving fines on public transport or in an indoor setting will have their fines doubled at each offence.

After the first offence, there will be no discount. For example, receiving a second fine will amount to £200 and a third fine will be £400, up to a maximum value of £3,200.

There are a number of exemptions, which include, among others, children under 11 and people who cannot put on, wear or remove a face covering because of a physical or mental illness or impairment, or disability.

But, despite the government’s firm stance on wearing face masks on public transport, and in other areas such as shops, not everyone has complied.

Police have stopped almost 30,000 people for not wearing a face covering on public transport in under a fortnight in July – but just 33 fines were handed out.

Figures from the British Transport Police (BTP) show just a fifth (1,605) of the 28,964 people who have been spoken to by its officers in mid-July were told to leave the transport network for not wearing a face covering. 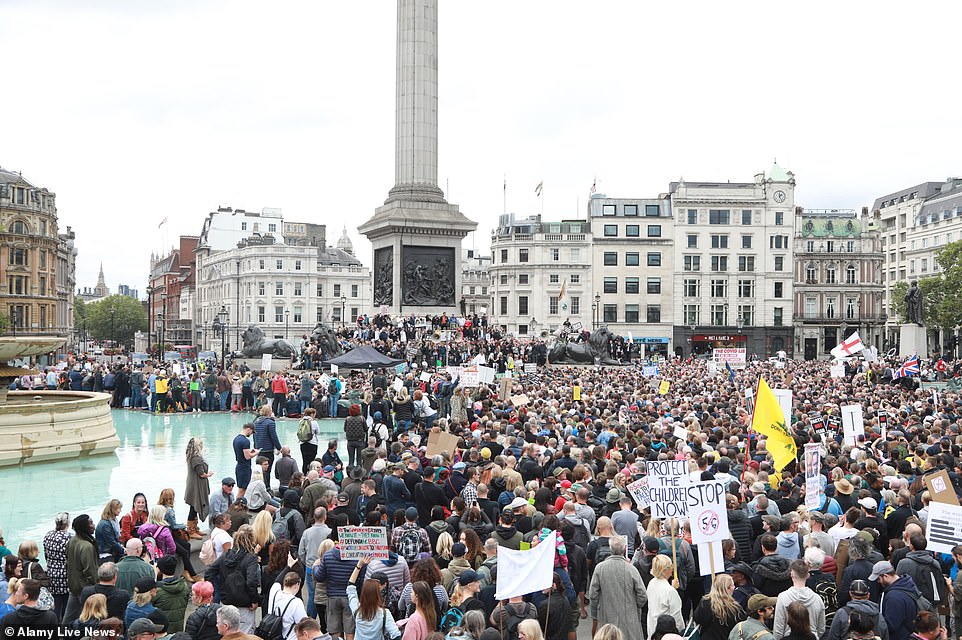 More than 10,000 Covid-19 conspiracy theorists who believe the virus is a hoax gathered in London’s Trafalgar Square to protest against lockdown restrictions and vaccination programmes

Of those people stopped between July 13 and July 25, just 33 were handed out a fixed penalty notice of £100, according to data released under the Freedom of Information request, the Telegraph reports.

Meanwhile, more than 10,000 anti-lockdown protesters who believe coronavirus is a hoax gathered for the ‘Unite for Freedom’ rally which started at noon in the capital on Saturday.

Demonstrators called for an ‘end to Government lies’ and the restoration of all freedoms as they marched past Downing Street towards the Houses of Parliament.

Pictures from the demonstration show Trafalgar Square almost full of protesters – none of whom are wearing masks – holding signs that brand the pandemic as a ‘hoax’. When full, the square holds up to 35,000 people.

Other signs claimed masks reduce immunity and likened the restrictions to ‘child torture’. One person held a homemade placard on which he had scrawled ‘no to mandatory vaccines.’

Confusion and anger on day one of new face mask law