The first repatriation flight from India after the Morrison government’s ban was introduced a fortnight ago has landed in Darwin with many fewer than the 150 passengers that were booked on the flight.

Flight QF112, a Qantas 787-9 Dreamliner from Delhi, touched down at Darwin airport just before 9am local time on Saturday, with those on board to be transferred 25 kilometres away to the Howard Springs quarantine facility. 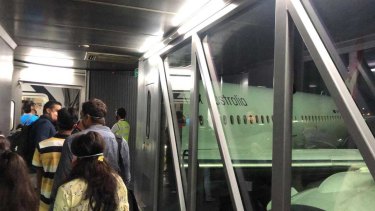 Passengers board the Qantas-run repatriation flight from Delhi on Friday night.

The fact that some Australians in India had now contracted COVID-19, and had not been able to board the now-resumed flights home, was “an indictment of the Federal Government’s complacency and of Scott Morrison’s capacity to make an announcement and then forget about it”.

“My message to them [Australians in India] is stay safe. Australians care about our fellow citizens.

“This is extremely distressing for those Australians who have loved ones who are trapped overseas, some of whom have been trapped over there for more than a year… This is a terrible situation. It is particularly dire for those unaccompanied children, of which we know there are more than 170.”

One passenger with a ticket for the flight, who spoke anonymously for fear of losing his spot, said the group of passengers had not all been told their final test results despite the Australian government announcement.

“We heard that news and now we’re very scared,” he told The Age and Sydney Morning Herald from his hotel room in Delhi on Friday night.

“It’s nerve-wracking because I’m pretty sure I don’t have it, but I’m still stressing about it”.

Another passenger, who also wished to remain anonymous, said he was now unable to travel to Australia as his wife had received a positive result just hours before the flight.

The couple had travelled more than 120 kilometres to Delhi to undertake the three-day hotel stay required for the repatriation flight. He said neither he nor his wife had any symptoms before they came to the hotel and he was concerned the virus could have spread in the hotel.

“If it could happen in Australia why could it not happen in India?” he said.

While guests are not able to leave their rooms, the man said he had to use the air conditioner for relief in the hot Indian summer weather and was worried the virus could have spread that way.

“There’s no ceiling fan in here and the windows don’t open,” he said.

The pair will wait another two weeks, get tested again and apply to DFAT for another flight, he said.

The aircraft sent to rescue the stranded Australians arrived on Friday with 1056 ventilators and 60 oxygen concentrators to assist with India’s ongoing coronavirus crisis.

Meanwhile, 38 of Australia’s IPL players and coaches in India are expected to begin returning to Australia this weekend from the Maldives as the travel ban is lifted.

The rest of the Australian contingent last week flew to the Maldives after the IPL was postponed due to the virus breaking through the supposedly biosecure bubble set up by tournament officials to protect players and coaches.

This masthead revealed on Thursday plans for the group to quarantine in Sydney, rather than Howard Springs.

The government halted all direct and repatriation flights from India at the end of April as a third wave of coronavirus overwhelmed that country’s health systems.

It also banned people from transiting through other countries to get to Australia if they had been in India within 14 days.

There are at least 9500 Australians in India registered with the Department of Foreign Affairs and Trade as wanting to return, with more than 950 classified as vulnerable.

They include 173 children separated from their parents.

Model, 40, hits back at critics who slam her for breastfeeding four-year-old daughter as it is ‘comforting’

This ‘Wizards Of Waverly Place’ Reunion Will Make Your Entire Week